It somehow goes without saying in most discussions of rate hikes, but it bears repeating and highlighting.

A sustained period of rising rates, as engineered by the government, would end up costing the government a ton of money. Money, of course, it doesn't have.

The recent, giant nominal increases in national debt are significant and bad enough to begin with, but when combined with ever-higher compound interest payments at ever-higher interest rates, things go from worrisome to parabolically frightening. 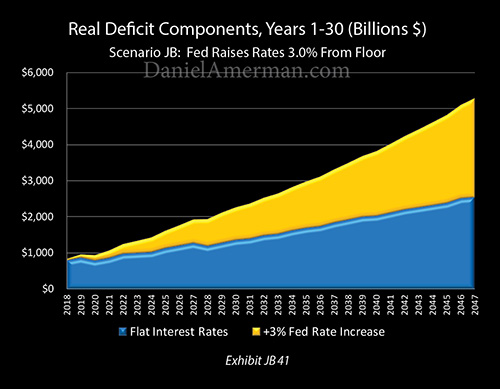 The blue area in the graph shows future real (inflation-adjusted) deficits if interest rates were to remain at post-crisis lows, and while the deficits do grow over time as a result of the increasingly expensive Social Security and Medicare programs, the annual rate of growth is restrained.

If however, compounding interest payments for a heavily indebted nation are added on top of the growth in benefit payments, then we get the gold area of the graph and annual deficits over time that are much larger, and are increasing in size at a much greater rate. 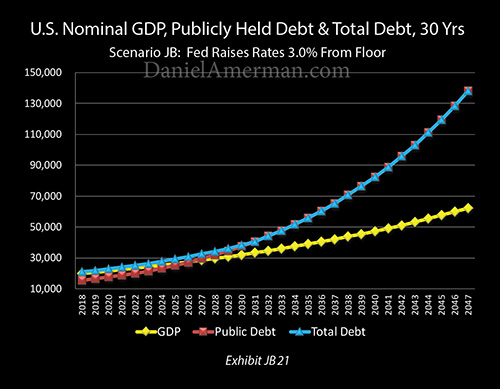 Over thirty years, these soaring annual deficits would produce a $138 trillion national debt  - which is an increase of $54 trillion over what the debt would be with lower interest rates.

The $138 trillion number assumes, however, that stability can be maintained for that period of time. And if we look at a nation that is not even remotely close to being able to make the interest payments on its own debt without borrowing that money, and where annual deficits are exceeding general governmental spending by the year 2029 - there is a very good chance that the future could be one of financial crisis instead. Indeed, each year that the financial pressure grows ever greater, then the risk of financial crisis would also be increasing.