It’s one of the bizarre dualities of US economics: Companies that exist for one reason, to make profits, are demonized for maximizing their ability to do just that.

Drug companies have no interest in curing diseases. They have an interest in somewhat lessening the severity of symptoms of diseases so they can repeatedly sell you a drug that will do that for many years. Curing things means zero residual profits. It’s a terrible business model.

That their entire marketing budgets are built around lies, deceit, and manipulation is beside the point. That’s what advertising is. Healthcare is simply a widget, like radial tires, canned tuna fish, or Wells Fargo bank accounts…something to vend to a customer in an attempt to make as much profit as possible.

Wed that with the government’s mandate to pay for the healthcare of a large portion of its citizenry, and you have our current unmitigated disaster of a system, which in and of itself is enough to capsize the entire economy. 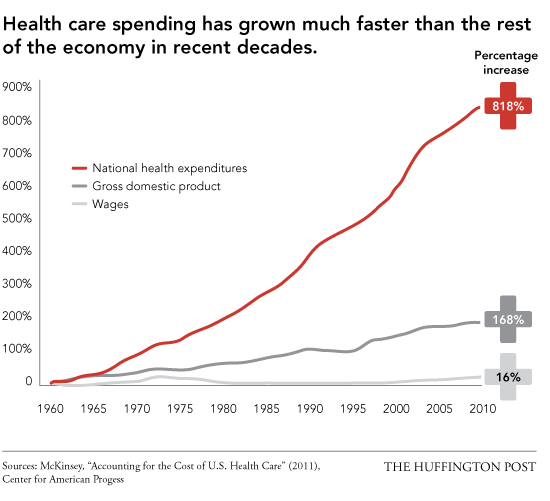 U.S. Sickcare is organized to maximize profits by any means available, including adverts aimed at patients, adverts aimed at physicians, lobbying to include costly medications in the list of what Medicare pays for, and so on, in an endless profusion of crony-capitalist skims and scams, starting with research that's funded to reach the conclusion the funding pharmaceutical company desires, all the way through masking the real-world consequences of medications.

U.S. healthcare isn't broken, it's fixed--fixed to exploit the many to benefit the few, fixed to maximize profits in a we-win, you-lose system of perverse incentives.

AS I have long held, healthcare/sickcare will bankrupt the nation by itself. Endless wars of choice, unaffordable pensions and rising costs of soaring debt will only speed the arrival of insolvency and systemic collapse.