Gold and Silver Fall in Q1, But New Catalysts Loom

Gold and silver prices fell in the first quarter of 2021, but as the world begins to move from pandemic to recovery, new risks for investors—and thus new catalysts for higher prices—are emerging.

Our quarterly review looks at the performance of gold and silver vs. other major asset classes in Q1, along with a review of the conditions that are likely to impact them as the year progresses.

The big story in Q1 was the sharp rise in bond yields, and the subsequent rise in the U.S. dollar, which combined to put pressure on gold and silver prices. The U.S. 10-year yield hit 1.744% by March 31, a near doubling from 90 days earlier, one that is outsized by historical standards.

Here’s how gold and silver performed against other major asset classes in the first three months of the year. 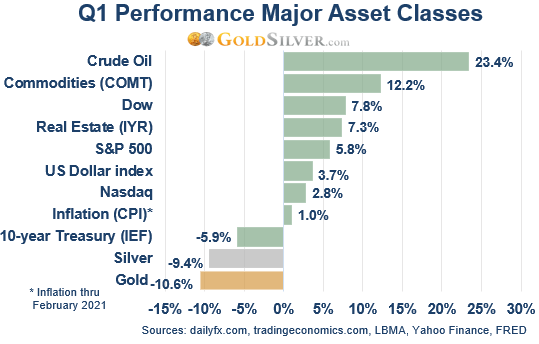 The US dollar rose 3.7%, while Treasuries logged their worst quarter since 1980, pushing yields sharply higher. These two factors were the biggest reasons for lower gold and silver prices.

Crude oil prices saw a hefty rebound, and the commodity complex continues to show signs of strength. Broad stock markets also continued to rise, largely on optimism of an improving economy. Bitcoin (not shown) continued its volatile surge, rising 103.2% in the quarter.

As Q2 gets underway, most investors are focused on the recovery efforts. And the government has unleashed massive efforts: Biden announced that 90% of adult Americans will be eligible for vaccination by April 19… a $1.9 trillion coronavirus relief plan was approved… and now a $2.25 trillion infrastructure bill is on deck.

Will it all work? What are the ramifications if doesn’t—and if it does?

Interest Rates: Arguably the #1 driver for gold is “real” interest rates (the 10-year Treasury yield minus CPI inflation), including the expectation of which direction that real rate is headed. So where is it headed for the rest of 2021?

The gargantuan stimulus packages are likely to continue to push global bond yields higher, at least in the short-term. Most institutional investors agree… a CNBC poll of over 100 chief investment officers, equity strategists, and portfolio managers showed that over 60% believe the 10-year Treasury yield will exceed 2% by the end of 2021.

As the Fed has made abundantly clear, it will maintain an easy monetary policy. San Francisco Fed President Mary Daly said, “We still have almost 10 million people on the sidelines looking for jobs… we really aren’t projecting achieving either side of our dual mandate in 2021 and that’s why policy is remaining accommodative.”

So will gold and silver be weak for the rest of the year? Not so fast…

Inflation: It’s hard to get through a day of news without seeing a new report on inflation. Most economists and investors are now building it into their models…

It seems inevitable consumer price inflation will climb this year—if so, the real rate can fall even if the nominal rate pushes stubbornly higher. This includes the stagflation possibility (inflation in consumer goods but deflation in economic growth).

Currency supply growth hit another all-time high in February, the 11th consecutive month it surged. It is up 39.1% from a year ago, a very large move in historical context… the last time it grew this much was the 1970s, which was also the last time we had runaway inflation.

The US dollar hit a one-year high versus the yen last quarter, as well as multi-month highs against other currencies. The dollar rose for the third consecutive month against the yen, its biggest ascent since the end of 2016. The dollar responded mostly to the surge in U.S. bond yields, currently at a one-year high.

In the bigger picture, I’ll point out that the global share of US-dollar-denominated reserves dropped to 59.0% in Q4 (IMF’s most recent data), its lowest level since 1995. The dollar’s share has dropped by a full 7 percentage points since 2014—if the current pace continued the dollar’s share would fall below 50% by the end of the decade.

Gold and silver are inversely correlated to the U.S. dollar and thus excellent hedges against dollar weakness, whether that weakness is short-term—or terminal.

Housing Trend: Another asset that soared in Q1 was US home prices… they surged by 11.2% vs. a year ago, the biggest increase since the peak in 2006 (based on January’s National Case-Shiller Home Price Index).

Will the trend continue? Part of the answer probably lies in home availability. According to the National Association of Realtors, there were 1.03 million homes for sale at the end of February, the lowest level since 1982. Above average demand may thus continue for a while, though soaring home prices make the market increasingly vulnerable, which gold can hedge.

Bloated Stock Market: By any measure the stock market is overvalued, second only to the extremes of the dot-com bubble. It’s been this way for a while, but nothing goes up forever. And once the day of reckoning arrives, it will spark a rotation of capital into gold and silver.

Higher Taxes: While a political hot potato, Biden has proposed increasing the U.S. corporate tax rate from 21% to 28%. If adopted it would clearly hurt company profits. And it wouldn’t be just US companies—multinational firms would find it harder to qualify for federal tax deductions based on payments to certain foreign governments.

Gold and silver can hedge stocks and even entire industries that would see lower profit margins due to higher taxes.

Silver Outperformance: As our readership know, silver is part monetary metal like gold but also an industrial metal, whose uses will climb in the infrastructure and clean-energy spending spree proposed by Biden.

The gold/silver ratio (gold price divided by silver price) ended Q1 at 70; despite the decline from its record high of 123 a year ago, the ratio is still 22% above its long-term average of 55, showing it remains undervalued relative to gold. The ratio fell to 32 in 2011, and below 20 in 1980.

We have every reason to expect silver to outperform gold, as it always has. It’s also noteworthy that despite being more volatile, silver fell less than gold in Q1.

Black Swans: The current fiscal, monetary, and market environment remains ripe for an unforeseen event. Potential candidates include unexpected delays with the vaccine rollout, a surge in Covid variants, and a stock market or real estate crash. Another shock to the global economy would underscore the importance of gold, especially if the scenario Mike outlines in episode 7 of Hidden Secrets of Money plays out.

The Gold and Silver Advantage

The most likely scenario for the remainder of 2021 is one where gold and silver continue to offer meaningful hedges, along with the distinct possibility of a new up-leg in prices.

I hope you’ll accumulate enough physical gold and silver to withstand the shocks that seem destined to strike, whether they be financial, market, or monetary.