It’s time for our quarterly report on gold, something we like to do because it helps investors track the industry, as well as keep us focused on the bigger picture and not daily gyrations. Here’s an examination of gold’s performance during the third quarter of 2020, along with its year-to-date performance vs. other major assets. I’ll also highlight the potential catalysts that show the price is not just consolidating, but coiling…

Gold ended the quarter up 6.7%, but silver took home the prize. 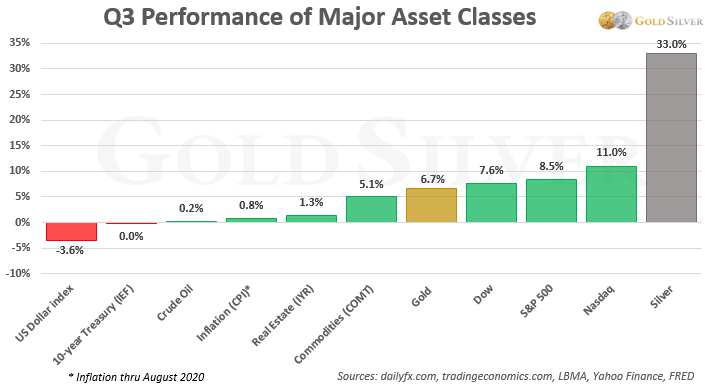 The falling US dollar helped gold and silver advance. But the yellow metal set yet another record: it was gold’s eighth straight quarterly gain.

Silver also had a strong surge into early August, closing at $28.93 on August 6. However, it remains 42% below its all-time high of $50 in 1980, showing the greater opportunity still remains with silver.

Investment demand for gold was still high, and in some segments it surged. We avoid paper gold products, but it’s worth pointing out that GLD (SPDR Gold Shares ETF) saw its biggest one-day influx this year on September 21, adding a 1.2 million ounces. On a day gold fell by almost 2%.

You’ll see that the 10-year Treasury offered zero return, and a negative return on a real basis. 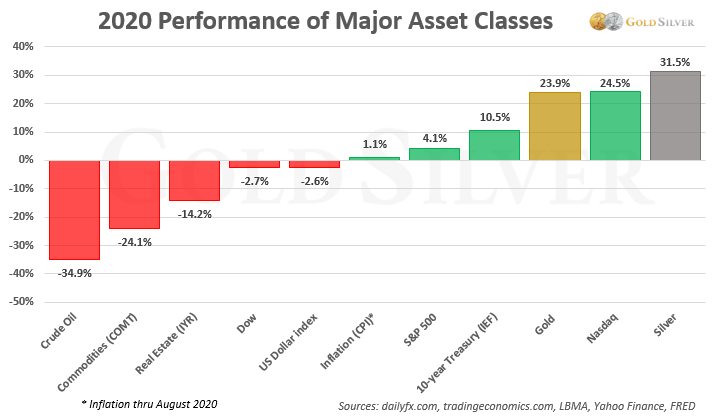 Of the primary investment classes, silver leads the pack. It’s even outgained the tech-darling Nasdaq.

The US dollar fell into negative territory for the year, along with the Dow, real estate, and oil.

With silver’s outperformance of gold in Q3, the gold/silver ratio (gold price divided by silver price) fell to 79.5, from 99 at the end of Q2. The historical average since the 1970s is around 50, so despite the recent decline the current ratio suggests silver is still undervalued relative to gold.

While gold and silver were up for the quarter, both eased off their August highs and have since been consolidating. Another way to look at it is this: they’re coiling for another big run.

How do we know there will be “another big run”? Perhaps the most important factor when looking at where the gold price might be headed is that there’s not just one issue that could ignite it; uncertainty persists in most segments of society. Despite a Fed-fueled surge in stock markets and stimulus amounts that could reach to the moon and back, the degree of unease in many areas of society simply isn’t going away.

In fact, it’s hard to look at the horizon and not see numerous risks—and thus numerous catalysts—for gold and silver in both the short and long-term…

US Election. Elections are usually political lightning rods, but next month’s promises to be tumultuous. Both parties pledged they won’t agree to a winner if the results are close, something that will only increase uncertainty. Reactions from the opposing party once a winner is declared could spark further unease. While each party claims the other would be worse for the markets, we think gold will be the winner.

Social Unrest. Protests and riots, particularly in the US, have persisted, leading to extreme calls like “defund the police” that would promise disaster if enacted. One insurer was quoted as saying the damages have reached “catastrophic” levels. Perhaps the most apropos sign of social unrest was the U.S. Department of Justice declaring New York City, Portland and Seattle as “jurisdictions that permit anarchy,” something that could affect their federal funding.

US Dollar. It seems no country wants a strong currency, which has arguably made the dollar the most overvalued major currency, something President Trump has repeatedly made clear he does not want. In this circumstance further monetary debasement appears unavoidable, what would weigh on the world’s reserve currency, even if the index rises at times.

Coronavirus Fallout. Mass layoffs, plummeting consumer spending, and widespread business shutdowns show the pandemic continues to wreak havoc on the economy. To put last quarter’s GDP decline of 9.5% into perspective, GDP had never fallen more than 3% in any quarter since record-keeping began in 1947. And while a vaccine might help, a lot of damage has been done that isn’t easily reversible.

Meanwhile, the virus has not relented. Global deaths crossed the one-million mark at the end of September, with total cases reaching 33.5 million. In the U.S. there were 205,000 deaths at the end of the quarter, with cases surpassing 7.1 million.

And as we go to press, the news hit that President Trump tested positive for Covid-19. Depending on the seriousness of his illness, this is likely to increase uncertainly in political and other circles.

Monetary Stimulus… World central banks seem to think there is no limit to monetary intervention. The Fed balance sheet is perhaps the #1 driver of gold prices this year—and the current budget deficit, already a record, has yet to be funded.

And now the US Treasury has hinted it may lend directly to borrowers, what would be a watershed moment. It’s technically illegal for the Fed to do this—but so was buying corporate bonds! Direct lending would arguably speed up their goal for more inflation, too.

We’re reached a point where there are now so many liquidity programs, most of which are complicated to understand, that it’s hard to quantify the amount of currency being thrown at the U.S. economy. We don’t know where this ends, but the trend is clearly bullish for gold.

… And Fiscal Stimulus. As the quarter ended, US politicians had still not agreed on the next stimulus package, though it almost certainly will be measured in the trillions of dollars.

Meanwhile, US Treasury data show that total government spending in fiscal 2020 had reached $6.1 trillion by August 31, a never-before-seen amount. The 2020 budget deficit now stands at $3 trillion, also a first, and means the government has spent $3 trillion more than it has taken in this year. The current budget deficit is now almost twice as large as the previous high in fiscal 2009.

Real Interest Rates. US Treasuries, regardless of duration, pay no real yield after adjusting for inflation. At the end of the quarter the benchmark 10-year Treasury cost investors as much as 100 basis points. This vastly lowers the “opportunity cost” of gold.

Vulnerable Stock Markets. All three major U.S. stock indexes rose in Q3, pushing them to overvalued levels by any reasonable measure. In the same breath we have to ask… to what extent does the Fed intervene again when the markets have their next correction or crash?

The move into gold is real and growing. It’s not hard to see why: artificially low rates combined with ballooning fiscal deficits, extreme monetary creation, and inflated equities creates a veritable utopia for gold. The uncertainty surrounding the Fed’s diminishing ability to respond to crisis only adds to the importance of holding gold at this point in history.

The most likely path ahead is one that’s not just supportive of higher gold prices, but one where gold offers the most optimal financial safe haven to those with meaningful accumulations.

As we move into the final quarter of this unprecedented year, the necessity of holding gold is only growing, particularly in light of the Fed’s extreme monetary actions, ongoing geopolitical conflicts, and the risks associated with an uncontrolled virus, bloated stock markets, and cantankerous US election.