Gold & Silver Volatility Near Record Lows — Guess What Comes Next?

As precious metals investors know all too well, gold and silver prices haven’t moved much for the past 5+ years. And along with that stagnant price environment has come low volatility.

Volatility readings have fallen so far, in fact, that silver has matched its all-time low. It’s further confirmation of the widespread disinterest in precious metals.

But as long-term investors know, extreme readings don’t last indefinitely. Further, the longer they spend at the fringes of their typical range, the more steam builds up, making a reversal to the opposite extreme likely. When you combine that probability with Mike Maloney’s projections about what’s ahead for the global markets and monetary systems, the coming spike in volatility will be a lot of fun for those of us that have stayed long and strong.

Here’s a snapshot of the daily price movements in gold and silver since they peaked in the last bull market. 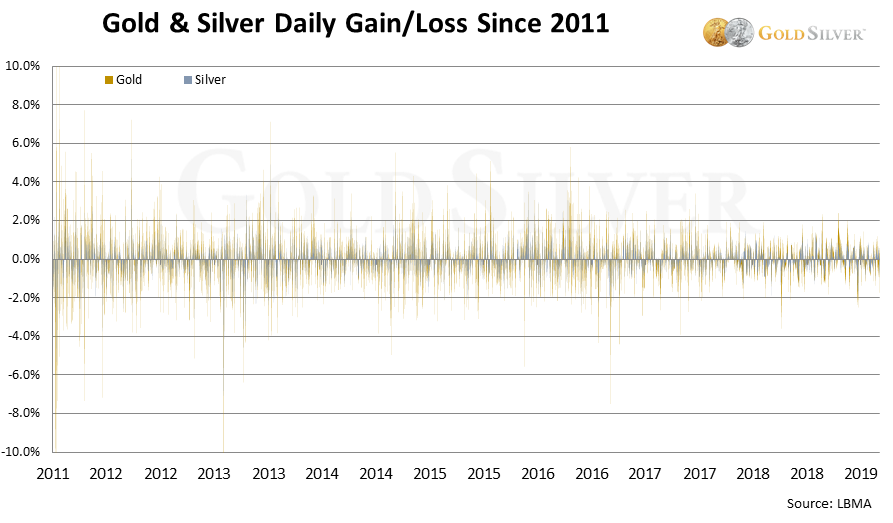 The chart is crowded, but you can see that as we got further and further away from 2011, volatility decreased along with prices.

The following charts measure the average daily price change per year for each metal. I went back to 1990, since that decade was dubbed the “nuclear ‘90s” to miners, because prices were so low many couldn’t make a profit. I wanted to see if volatility was low then, too.

Here is gold’s average volatility — which measures both rising and falling prices —from 1990 to present.

You can see that over the past 29 years, only two years registered lower volatility than what we’ve seen so far this year.

You’ll also notice that those extreme low readings in the mid-1970s led to a doubling in volatility. And those volatility levels remained at least twice as high until last year.

It’s important to note that jumps in volatility don’t tell us which direction the price is going. It doesn’t even tell us if by the end of the year the price will be different at all; the price could be highly volatile but not be any higher or lower than where it started.

What the chart does tell us is that low volatility leads to high volatility. It’s a cycle that repeats in many different forms of investments. And given that prices are low now, just like in the 1970s, odds are that higher prices will be the result of the spike in volatility.

As the chart shows, silver’s volatility so far this year matches its low in 2000. It’s 77% below what it was in 2011, when gold and silver prices peaked. And yes, it’s even lower than what it was during the nuclear ‘90s.

So, if volatility really starts to ratchet up, what kind of levels might we see?

The best example of high volatility comes from what has been, so far, the greatest precious metals bull market in modern history.

The following chart shows the daily price movements of gold and silver from January 1971 through December 1980. 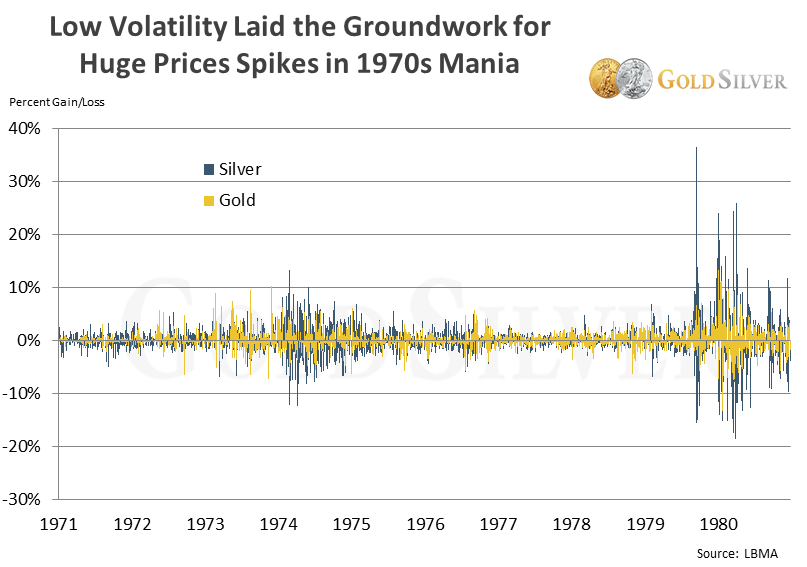 On average, silver moved 1.4 percentage points more than gold during the decade. What’s interesting, though, is that silver logged bigger one-day movements only 63.5% of the time. So gold moved more sharply than silver roughly one-third of the time.

Here’s another compelling fact. When the market entered its mania stage, silver's volatility increased to a greater degree than gold’s. From 1979 through the end of 1980, silver outperformed gold by an average of 2.4 percentage points, almost double what it did before the mania set in. This is a direct message from history to those investors frustrated by the dormant silver price: once the next phase gets going, the silver price will likely not only make up any “lost” ground but may well go through the roof.

There’s no doubt in my mind that this level of volatility — and silver’s dramatic outperformance over gold — will repeat in the next big run-up in precious metals.

Based on the historical record, there are clear investment conclusions we can draw:

The future will indeed be very fun for those of us that own lots of gold and silver. In preparation, Mike and I continue to accumulate. Here’s the cheapest 10 oz silver bullion you can buy right now, a product designed by Mike that’s been flying off the shelf.