The yellow metal briefly breached resistance at $1315 (5/15/18 high) during Asian hours but was unable to attract follow-through buying to extend the advance.

Oil prices were firmer (WTI from $53.09 - $54) and a tailwind for stocks, boosted by the API report of a smaller than expected build in US oil inventories, along with the ongoing concerns over Venezuela sanctions.

US stocks quickly recovered and climbed into the afternoon (S&P +28 to 2668), with the IT and Consumer Discretionary sectors leading gainers. The move was aided by a continuation in oil rally (WTI to $54.90) off of a smaller than expected build in crude and surprise draw in gasoline from the EIA’s oil inventory report. The US 10-year yield rose to 2.733%, while the DX clawed back to 95.92. Gold pulled back to support at $1309, with some profit taking seen ahead of the FOMC statement.

The FOMC statement at 2PM was extremely dovish. They cited inflation moving lower in recent months, and removed language that risks are roughly balanced along with wording that further gradual increases to the funds rate were expected.

They said the FOMC “will be patient” as it determines what future adjustments to the target range for the FF rate, and that they will consider adjusting the reduction of the Fed’s balance sheet if conditions warrant. Stocks soared (S&P +42 to 2682), and the US 10-year bond yield sank to 2.71%.

AT 2:30 PM, Powell went a step further, saying that the case for raising rates has weakened and that monetary policy is no longer accommodative, is appropriate right now and within the Committee’s view of neutral. Stocks moved higher (S&P +51 to 2691), and the 10-year yield fell to 2.692%.

Open interest was off huge – 47k contracts. This was a combination of options related closeouts, along with some short covering from yesterday’s rally. Volume was much higher with 425k contracts trading – inflated by options activity and the ongoing Feb-April rollover.

Bulls were encouraged by the extension of gold’s rally last night to challenge $1315 and then the dovishness from the Fed that drove the market to a fresh 8-month high at $1323. The bulls feel that the trend is their friend and note the up trendline from the 11/13 $1196 low is still intact and expect the yellow metal’s strong rally over the past two months to carry further.

They’re expecting continued volatility in equity markets along with a pause in Fed rate hikes and a further decline in the US dollar to continue driving gold higher. While we haven’t seen the COT report in 6 weeks, bulls maintain that despite gold’s sharp rally, a significant amount of large fund shorts remain, and will provide further upside momentum when forced to cover.

They maintain that the 20% correction in equities – much of which occurred during very illiquid holiday trading – was also overdone, and expect the rebound seen over the past month to continue. 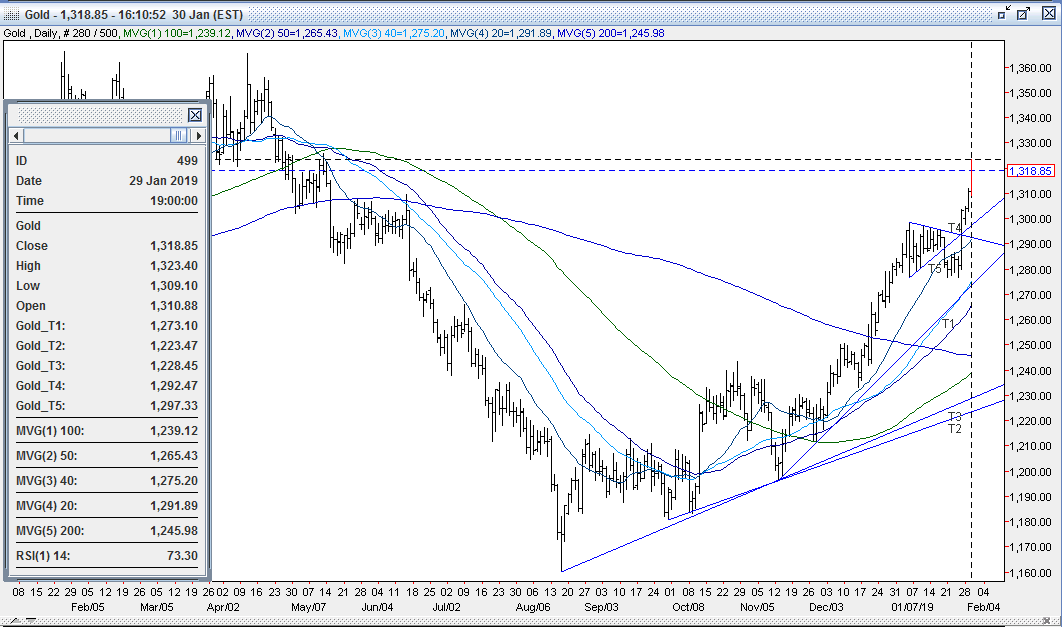 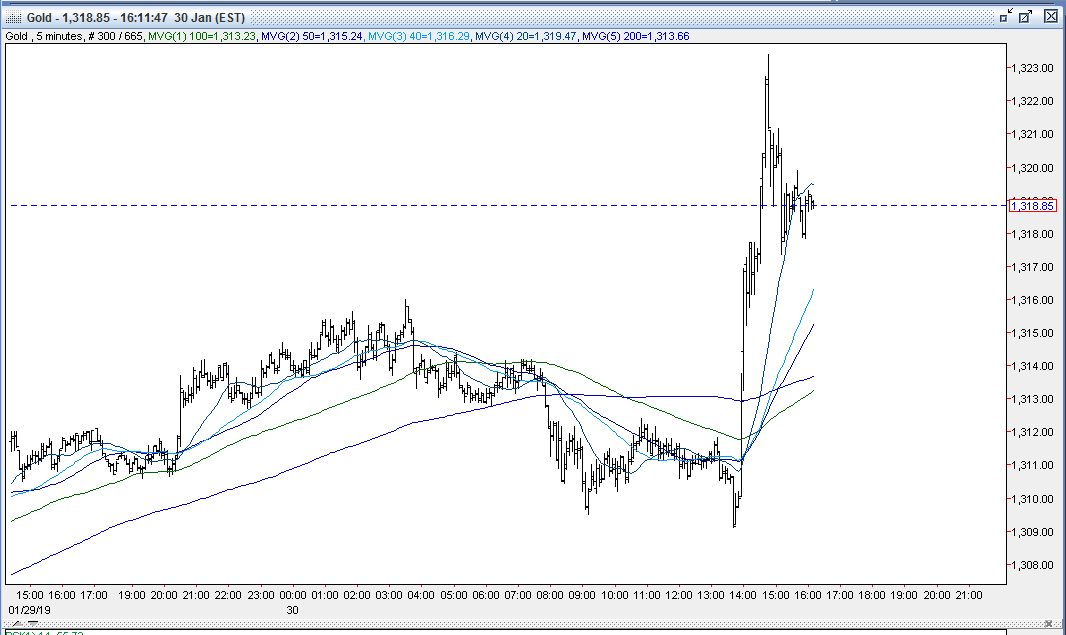 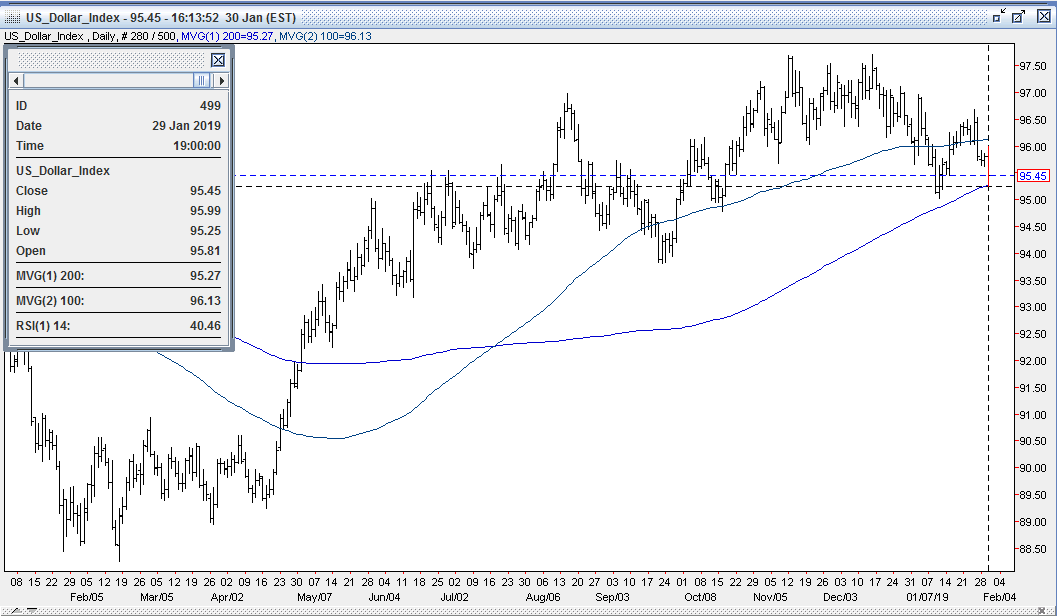 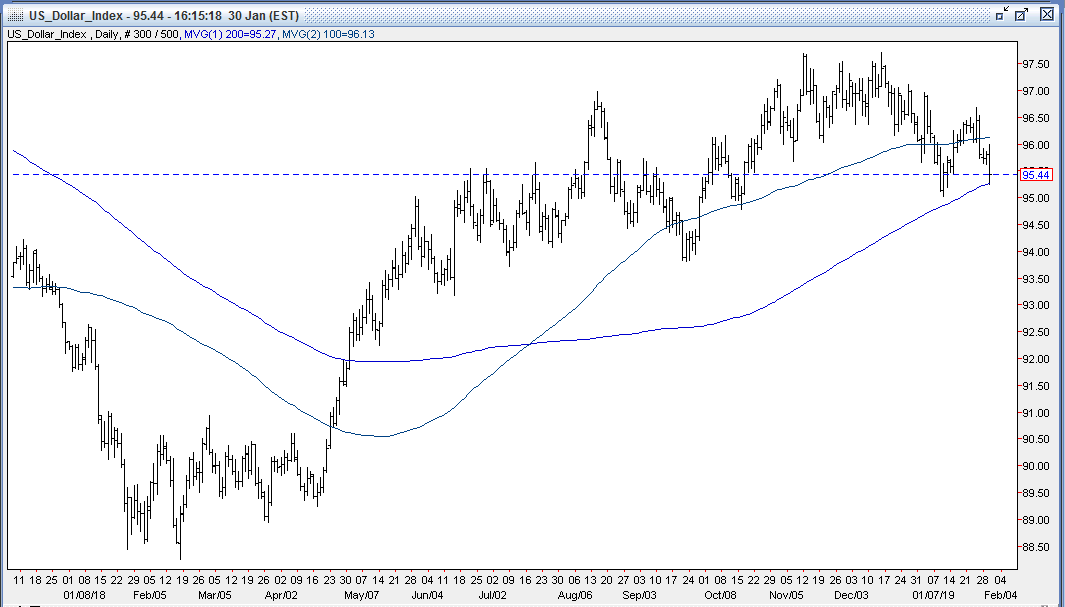