·        It rose to its $1509 high early during Asian hours, lifted by weakness in S&P futures (-22 to 2928) on reports that China is hesitant to pursue a broad trade deal with the US, with Vice Premier Liu He allegedly saying his offer to the US won’ include commitments on reforming China’s industrial policy or government subsidies when talks resume in the US this Thursday.

·        Some hawkish comments from the Fed’s George (not concerned about low inflation, US economy is currently in a good place, outlook for continued moderate growth, doesn’t see need for a further rate cut) and a lack of progress in US-North Korea talks also contributed to the move.

Support holds at the $1496 double bottom after the NY open

·        Gold softened a bit further after the NY open, but support at $1496 (last two sessions lows) held, as bargain hunting buying  -a major feature in this market for months – emerged once again.

Early weakness in US stocks give gold a boost to $1504

·        US stocks opened weaker (S&P -15 to 2936), with the news that China was reluctant to pursue a comprehensive trade deal continuing to weigh.

Gold retreats to $1498 as equities turn positive into mid-day

·        The move was aided by dovish comments from the Fed’s Kashkari (Fed should continue to cut rates, should be supporting the economy, not tapping the brakes, cited slowing global growth, weakening business investment and below target inflation), and some optimistic comments from White House Economic Advisor Kudlow (“Recently some of statements coming out of Beijing have been a little more positive, they’ve been in the market buying some agricultural products – that’s a good sign, it is possible some additional progress will be made toward the end of the week”).

Gold pressed to $1488 on report that China ready to do deal on agreed upon points, set timetable for resolution of harder issues

·        In the afternoon, a report surfaced that the Chinese Commerce Ministry was ready to do a deal on the parts of the negotiations both sides have agreed upon, and was prepared to set out a timetable for the harder issues to be worked out next year.

Gold recovers and holds $1492 while stocks end lower, but bond yields and the dollar remain firm

·        Concerned with 2 consecutive days of lower highs and lower lows, and with a finish below the key $1500 level and that the double bottom at $1496 failed to hold

·        Probabilities of future rate hikes have increased in recent days off of the weak US economic data (especially large misses on both ISM Manufacturing and ISM Services) - Fed Fund Futures show:  73.2% chance of a 25bp cut at the October meeting, a 36.8% probability of two 25bp cuts by the December meeting, and a 17.9% likelihood of three 25bp cuts by the January meeting - and bulls see a rate cutting environment one in which gold can flourish

·        Bears were pleased with today’s $12 pullback – especially given the decline in US stocks.

·        Feel that markets are back to overestimating the probabilities of future Fed rate cuts, feel that the downward pressure on bond yields was also overdone, and that a modest reversal should allow the US dollar to strengthen further against other currencies as they feel the dollar still remains the “cleanest dirty shirt in the laundry basket” with the US as the sole global growth engine. Recent soft data for both Germany and the Eurozone (weak German Factory Orders and Eurozone Sentix today) that drove the German 10-year yield further into negative territory over the past months (German bund yield remains negative and not far from record lows of  -0.743%) underscores this view.

·        Feel a US-China trade deal is in both sides’ best interests, and feel that the recent agreement to resume negotiations this week and future similar conciliatory actions will be viewed as positive steps by markets, which should help equities to continue to rebound and will put downward pressure on the yellow metal. 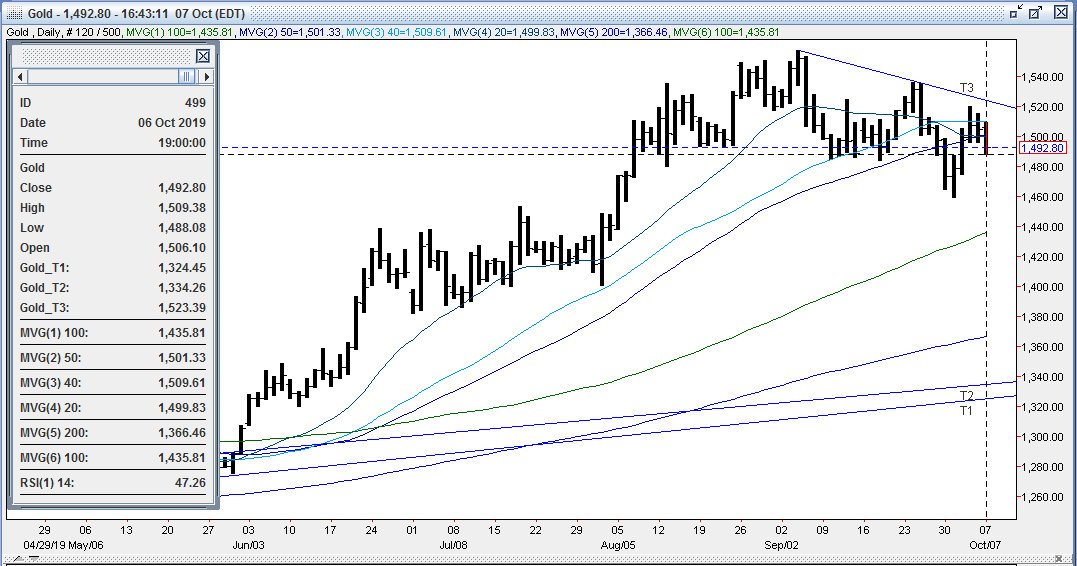 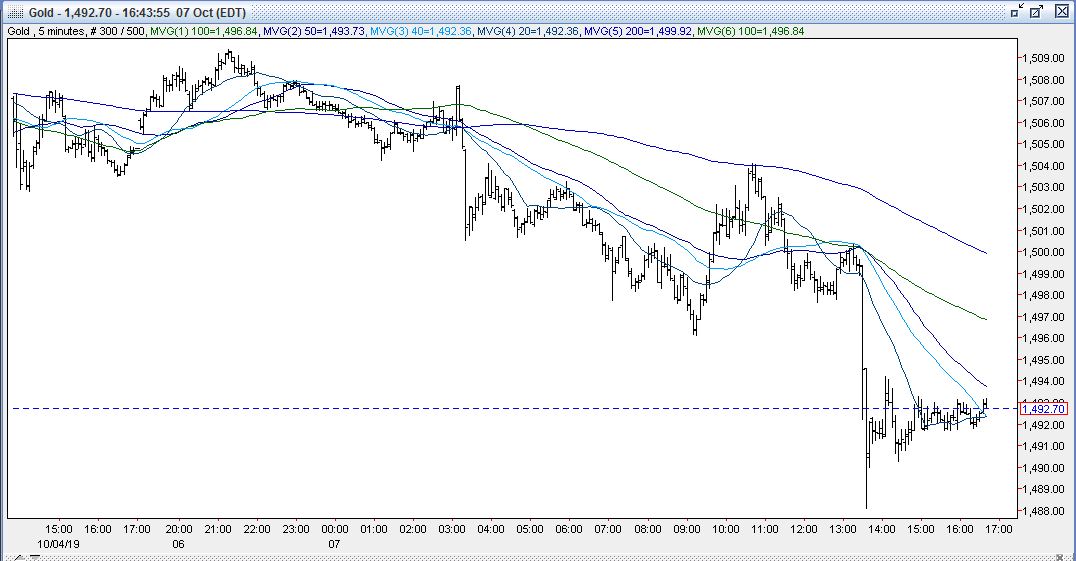 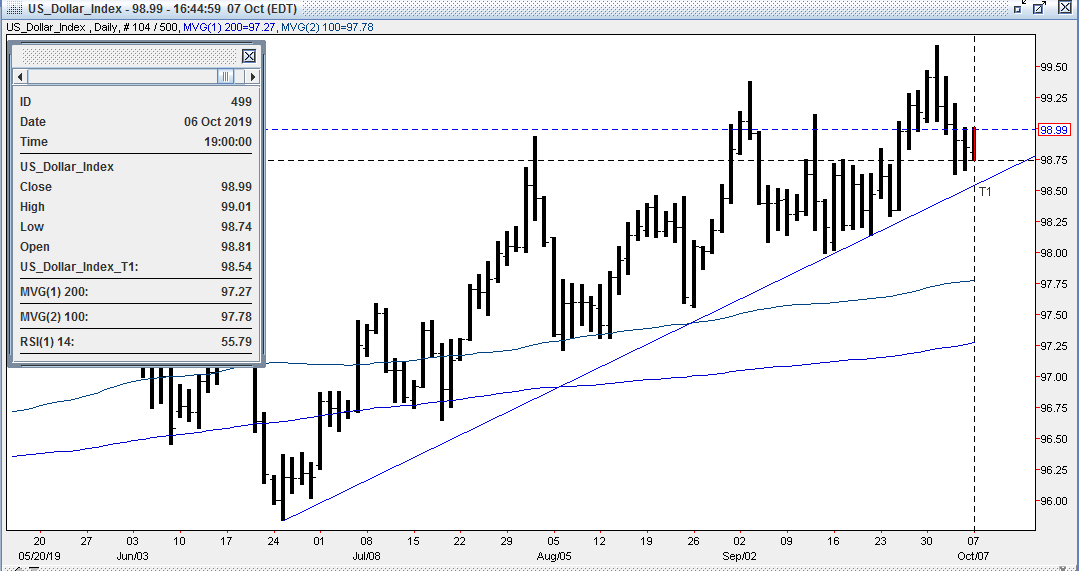 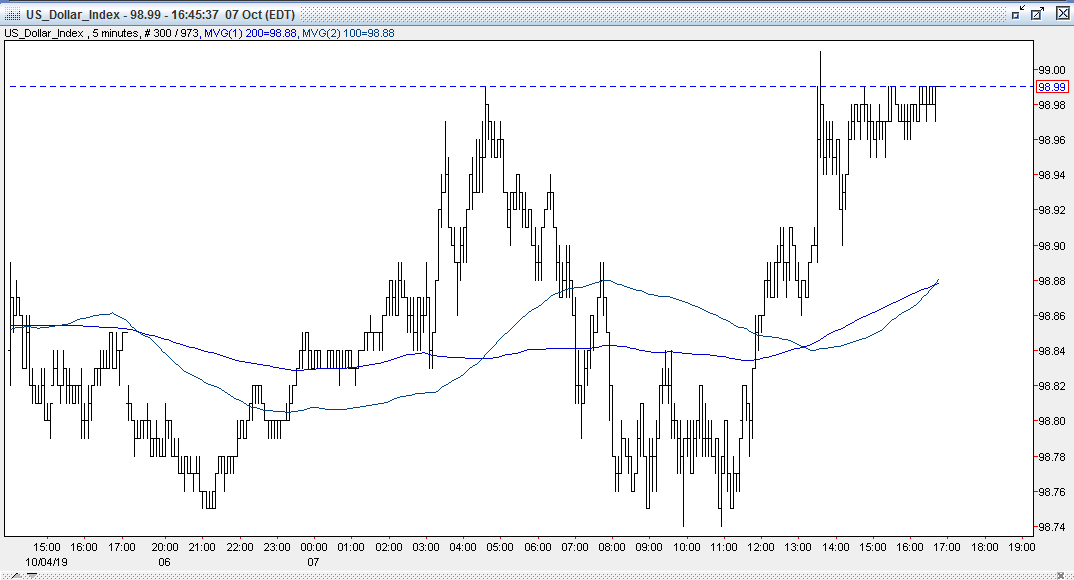