·        On top of last evening’s US expansion of its trade blacklist to another 28 Chinese companies, Blomberg reported the US was deliberating limiting government pension investment in China, while the South China Morning Post reported that China was toning down expectations of the talks, were cutting short its stay by one night, and that Vice Premier Liu He would not carry the “special envoy” title.

US PPI Report weak, but gold remains stable against firm US dollar

·        However, the DX climbed to 99.03, lifted by a turn down in the euro ($1.0967) on trade concerns and comments from a German official that they see no need for a stimulus package, and further weakness in the pound ($1.22, EU accuses Johnson of playing stupid blame game, talks on brink of collapse).

Gold climbs against weakness in stocks, but resistance at $1509 holds

·        US stocks opened weaker, and slid through the mid-morning hours (S&P -39 to 2897), with losses in the Financials, Health Care, and Industrials sectors leading the decline.

·        Downbeat comments from the IMF’s Georgieva (warns of a “synchronizd slowdown” in global growth) contributed to the move, while a  rebound in oil (WTI to $52.50) helped to mitigate it.

·        Gold remained in the cross currents, but was able to take out the overnight high to reach $1509, where resistance at yesterday’s high held.

Gold slips to $1498 as US stocks pare losses into midday

·        Later in the afternoon, some dovish remarks from the Fed’s Powell (will start growing its balance sheet again in response to tightness in overnight lending markets last month, recent job gains may be revised lower, sees no reason why expansion can’t continue, stands committed to supporting the recovery) lifted US stocks further (S&P -13 to 2924), and took the 10-year yield slightly higher to 1.553%.

Gold rallies to $1509.75 on announcement US was placing visa restrictions on Chinese officials

·        Shortly afterward, news that the US was placing visa restrictions on Chinese officials over abuses of Muslims in Xinjiang knocked stocks back down (S&P -34 to 2903) and pushed the 10-year yield down to 1.536%.

·        Open interest was off 5.4k contracts, showing a net of long liquidation from yesterday’s decline.

·        However, some bulls were a bit disappointed that gold couldn’t take out yesterday’s $1509 high – given the weakness in equities and pullback in the US 10-year bond yield

·        Benefitted from the recent escalation of the ongoing trade war between the US and China (US expands blacklist, contemplating limiting Chinese stocks in government funds, blocks visas on Chinese officials; China planning on cutting short its US visit, tones down expectations of the talks, were cutting short its stay by one night, Liu He would not carry the “special envoy” title)

·        Despite Powell and the Fed not projecting as dovish as some would have liked at their last meeting, he was somewhat more dovish today, and markets are still anticipating the Fed is in an easing mode

·        Probabilities of future rate hikes have increased in recent days off of the weak US economic data (especially large misses on both ISM Manufacturing and ISM Services) - Fed Fund Futures show:  86.1% chance of a 25bp cut at the October meeting, a 40.6% probability of two 25bp cuts by the December meeting, and a 18.9% likelihood of three 25bp cuts by the January meeting - and bulls see a rate cutting environment one in which gold can flourish

·        Still concerned with the persistent bargain hunting buying that has cushioned downside moves (bounce from $1487 last night, and $1498 this afternoon)

·        Feel that markets are back to overestimating the probabilities of future Fed rate cuts, feel that the downward pressure on bond yields was also overdone, and that a modest reversal should allow the US dollar to strengthen further against other currencies as they feel the dollar still remains the “cleanest dirty shirt in the laundry basket” with the US as the sole global growth engine. Recent soft data for both Germany and the Eurozone (weak German Factory Orders and Eurozone Sentix yesterday) that drove the German 10-year yield further into negative territory over the past months (German bund yield remains negative and not far from record lows of  -0.743%) underscores this view.

·        Feel a US-China trade deal is in both sides’ best interests, and feel that the recent agreement to resume negotiations this week and future similar conciliatory actions will be viewed as positive steps by markets, which should help equities to continue to rebound and will put downward pressure on the yellow metal.

UBS Schnider – any pullback in gold is a buying opportunity:   https://www.bloomberg.com/news/videos/2019-10-08/any-pullback-in-gold-is-a-buying-opportunity-says-ubs-s-schnider-video 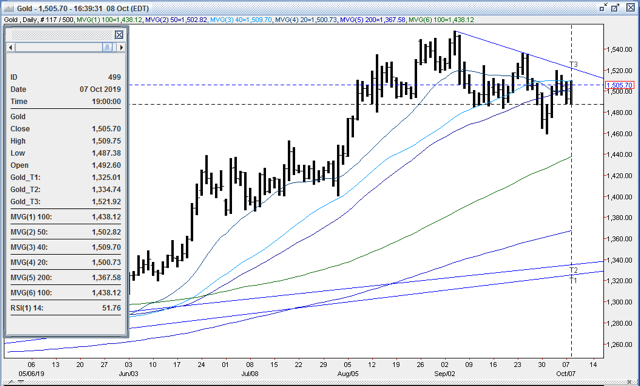 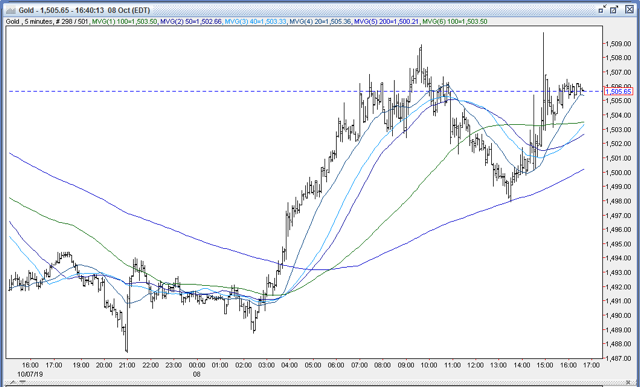 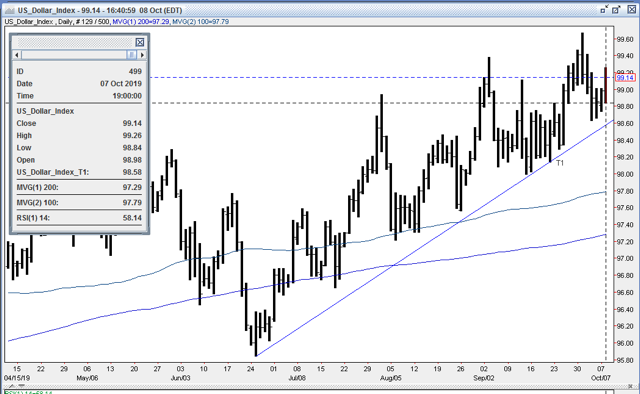 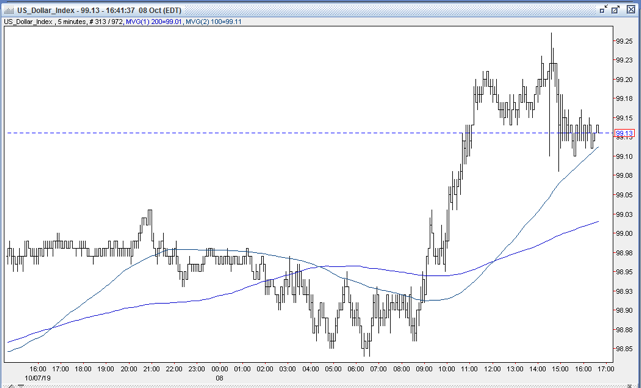