Could it be that for over 40 plus years a 70's-Style Stagflation is back? Do we now have the perfect conditions for it or is this just a flash in the pan? Back in the early seventies and eighties it was high unemployment, an oil embargo and inflation that took it's toll then. 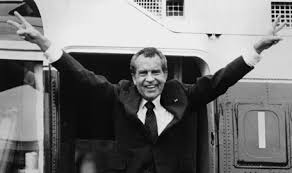 Nixon destroyed the dollar by taking us off the gold standard that was tied to it. He initiated wage-price controls to combat mild inflation which escalated for a decade into stagflation. Needless to say it took over 20 percent interest rates stop the runaway inflation that ultimately resulted Gold prices from $35.00 to $850.00

Is it about to happen again?

Are financial markets about to be hit with the perfect stagflationary cocktail of rising US inflation and slowing economic activity?

Although the US sharemarket continued to march higher overnight on hopes that US President Donald Trump would soon announce his "massive tax plan", some analysts are becoming a little uneasy that the US central bank may soon be forced to raise interest rates to combat rising inflation, even though US economic activity remains patchy.

They warn the latest US consumer price index (CPI) figures show that inflationary pressures are finally stirring, meaning this may be the year when the US Federal Reserve gets its rate hike forecasts right.

US inflation increased at its fastest clip in almost four years in January when the CPI – which measured prices of everything from restaurant meals to housing – jumped 0.6 per cent from a month earlier. Excluding the more volatile food and energy prices, the core CPI was up 0.3 per cent in the month, and was up 2.3 per cent from a year earlier.

US Federal Reserve boss Janet Yellen proudly pointed to the recovery in inflation when she testified before US legislators this week. She noted that US inflation – measured by the Fed's favourite gauge, the personal consumption expenditures (PCE) price index – rose by 1.6 per cent in the 12 months ending December. She noted that, although this was still below the Fed's 2 per cent  target, it was 1 percentage point higher than its pace in 2015.

Yellen also repeated her warning that it would be "unwise" for the Fed to be too tardy in raising rates, because this could force it to make a series of rapid rate hikes that would "risk disrupting financial markets and pushing the economy into recession".

According to Goldman Sachs economists, the latest US CPI figures, combined with the rises in US producer prices, suggest that the January core PCE index is likely to show a jump of 0.33 per cent from the previous month, and a rise of 1.8 per cent from a year earlier.

As a result, they estimate there is now a 30 per cent chance that the Federal Open Market Committee – the US central bank's key policy-making group – will raise rates at its March meeting. Previously, they put a 20 per cent probability on a March rate hike.

According to the economists, "we now think it is a close call whether the committee will hike the funds rate at the next two meetings or wait until June, and we see a very high odds (90 per cent) of at least one rate increase by mid-year".

But this stirring of inflation comes at a time when there are major questions about the robustness of the US economy.

Last week, Larry Fink, who runs BlackRock, the world's biggest fund manager with more than $US5 trillion in assets under management, warned the US economy was in the midst of a slowdown.

"I see a lot of dark shadows", Fink warned. "The markets are probably ahead of themselves."

He added that, although many US and European company bosses were bullish about possible policy changes the Trump administration might introduce, "most business people are not investing today".

Fink's caution appeared to be vindicated by figures released overnight that showed US industrial production – a measure of output at US factories, mines and utilities – dropped by 0.3 per cent in January from the previous month.

Although the drop largely reflected the fact that unseasonably warm weather had reduced demand for heating, causing utility output to fall, some analysts argued it was worrying that overall industrial output was flat compared with January 2016.

They also noted that separate figures released overnight showed that private-sector US workers suffered a 0.4 per cent decline in their inflation-adjusted weekly earnings in January from a month earlier.

Analysts warned that, if wage increases continued to lag behind price rises, US consumers would have little option but to cut back on their spending. Because consumer spending accounted for more than two-thirds of US gross domestic product, any belt-tightening would act as a major drag on US economic activity.