Watching this runaway, debt-fueled colossus be brought to a screeching halt after screaming along at 200MPH on Fed-greased rails is going to be staggering to see.

Corporate America will beget the next wave of financial pain, or even recession, a growing choir of the world’s biggest money managers is warning.

After years of borrowing for stock buybacks and company buyouts at extremely cheap rates, the tide is turning as the Federal Reserve raises its target rate and pulls stimulus. That’ll pressure the swollen ranks of over-leveraged firms and weigh on growth, Guggenheim Partners Global Chief Investment Officer Scott Minerd said. Pacific Investment Management Co. and BlackRock Inc. are among investors curbing purchases or being pickier about what they buy.

Debt levels crept up as central banks suppressed borrowing benchmarks, with the proportion of global highly-leveraged companies -- those with a debt-to-earnings ratio at five times or greater -- hitting 37 percent in 2017 compared with 32 percent in 2007, according to S&P Global Ratings. When that burden collides with rising rates, it could cause a recession in the “late 2019 to mid 2020” window, Minerd wrote. 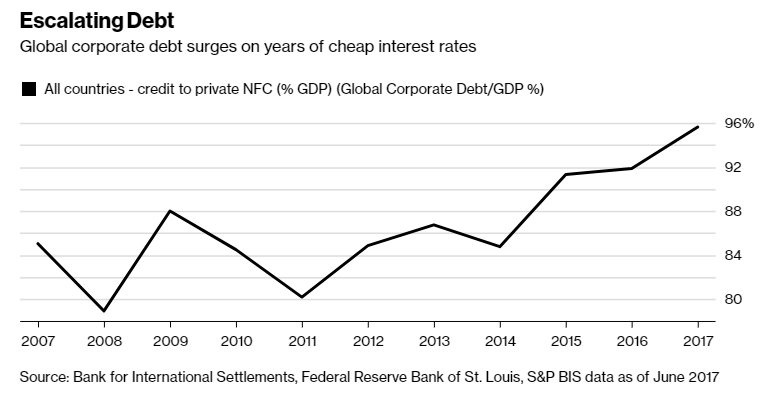 “As funding rates rise, the burden from higher borrowing costs will end up stressing corporate America, which means companies will look for other ways to reduce expenses,” Minerd said. “Layoffs will feed into the labor market, reduced capital expenditures will directly impact GDP growth, and all of this will drive the probability of recession higher.”

“The big loser this year, as we predicted it would be, are corporate bonds,” Jeffrey Gundlach, whose DoubleLine Capital oversees $119 billion, said in a March 13 webcast. “Trouble is here, people.”

ORIGINAL SOURCE: Corporate America Will Bring Next Wave of Pain, Money Managers Warn by John Gittelsohn at Bloomberg on 4/6/18

Gold Futures Gain for the Session

Fed's Harker Says Central Bank Should Be Backstop for Liquidity

Falling Through The Cracks: Peak Prosperity

"Everywhere Euphoria": Bank of America Warns Of "Echoes Of 2000"

Volatility Targeting Funds Leverage Up at Fastest Since ‘18 Rout