Holmes: Commodities Now a "Once in a Generation" Buying Opportunity

Part of living in ZIRP world means the perception that it’s impossible to earn a decent return on your money by investing in anything but stocks.

However, commodities are now priced so cheaply compared to equities that they present a generational buying opportunity, regardless of where the Fed sets rates.

Since the commodities supercycle began unwinding 10 years ago, many investors have been waiting for the right conditions to trigger mean reversion and lift prices. I believe those conditions are either firmly in place right now or, at the very least, in their early stages. 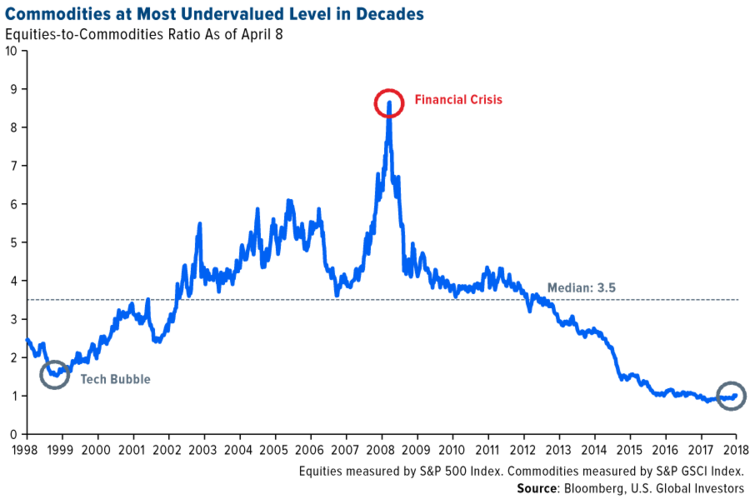 In addition, nearly 60 percent of money managers surveyed by Bank of America Merrill Lynch believe 2018 could be the peak year for stocks. A recent J.P. Morgan survey found that three-quarters of ultra-high net worth individuals forecast a U.S. recession in the next two years.

All of this makes the investment case for commodities, gold, and energy more compelling than at any other time in recent memory.

I still believe gold could hit $1,500 an ounce this year on rising consumer and producer prices, which I think are understated. This is more than apparent when you compare the official U.S. consumer price index (CPI) and alternative measures such as the New York Fed’s Underlying Inflation Gauge (UIG).

And as Dr. Ed Yardeni points out in a recent blog post, the word “inflation” appeared as many as 106 times during the latest Federal Open Market Committee (FOMC) meeting, a sign that Fed members could be getting more and more concerned about mounting inflationary pressures.

Recent reports also suggest gold production is slowing, which could help support prices long-term. Exploration budgets have been declining pretty steadily since 2012 after the price of gold peaked, and fewer and fewer large-deposit mines are being discovered.

Relative to equities, commodities are as cheap right now as they’ve been in decades. This is literally a once-in-a-generation opportunity that investors with a long-term view should seriously consider.