How to Ultimately Destroy a Free Market: Central Bank Interference 101

It’s the gift giver that keeps on giving, even when there’s nothing left to give! It’s the only entity whose sole job is to make sure that free markets are not allowed to function, that believes constant interference will allow us all to enjoy perpetual government-sponsored prosperity without ever experience any downside ever! Ladies and gentlemen, without further ado, your Federal Reserve bank!

Pension plans, both public and private have been ruined. Millions of future retirees and taxpayers will not have trillions of dollars they would and should otherwise have to support them in their later years.

When it comes to repaying the current global debt levels of ~310 % of GDP, we can confidently predict that such a debt load can never be repaid. They can only try to roll it over as long as they can -- which can't go on much longer without real consequence. Mounting losses are certain at this point. 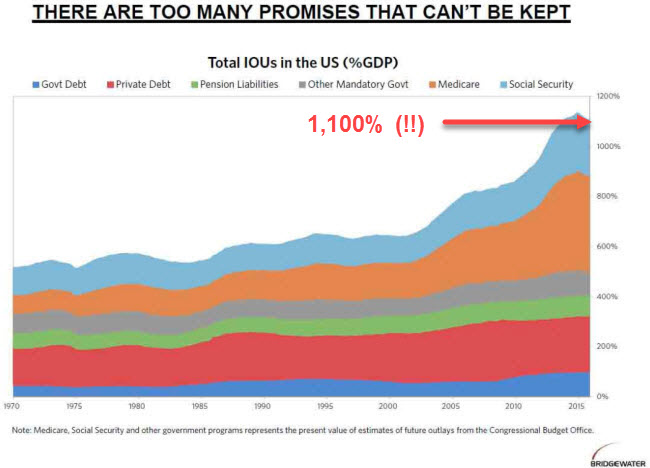 When it comes to underfunded promises and entitlement programs, such as pensions and social security (clocking in at nearly 800% of GDP!), there’s really only one all-important question that matter at this point: Who’s going to eat the losses?

By preventing that which should happen, the central banks have set the stage for an enormously dangerous and disruptive market crash. The kind that forces markets to close for days and weeks on end. The kind that leads to major banking crises punctuated by 'holidays’ where depositors cannot access their money. The kind where disorder and social unrest becomes a real risk.

ORIGINAL SOURCE: The Worst Threat We Face Is Right Here At Home by Chris Martenson at Peak Prosperity on 2/16/18