If History Is Any Guide: The Fed Will Cause the Next Financial Crisis

It’s usually a good thing when something functions “like clockwork.” Reliable results help avoid repeating past mistakes. Which is why the coming likelihood of the Fed raising short-term interest rates above that of the 10-year rate is so maddening.

In the U.S., the Federal Reserve has been the catalyst behind every preceding financial event since they became “active,” monetarily policy-wise, in the late 70’s. As shown in the chart below, when the Fed has lifted the short-term lending rates to a level higher than the 10-year rate, bad “stuff” has historically followed. 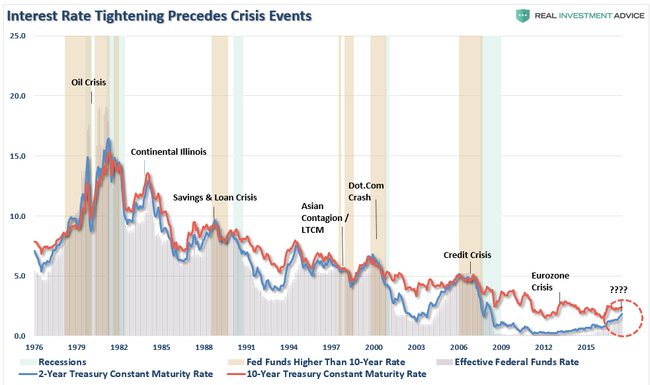 Another iceberg of an issue, one with enormous potential ramifications that almost nobody seems to notice, is the extraordinary shortfall in pension funding.

An April 2016 Moody’s analysis pegged the total 75-year unfunded liability for all state and local pension plans at $3.5 trillion. That’s the amount not covered by current fund assets, future expected contributions, and investment returns at assumed rates ranging from 3.7% to 4.1%. Another calculation from the American Enterprise Institute comes up with $5.2 trillion, presuming that long-term bond yields average 2.6%.

In the larger scheme of things, it is easy to forget that the standard operating procedure of the US economy, at this point, includes the benefit of “emergency measures” like near-zero interest rates.

Debt levered economic cycles are a function of the ability to draw forward future consumption. But there is a finite limit to the “positive” effect of a debt-driven economic cycle. Eventually, the “bill” must be paid. This particular debt-levered economy has been supported by the ongoing, and seemingly never-ending, monetary stimulus being injected by Central Banks.

Since “quantitative easing” programs are the Central Bank’s “emergency measures” for supporting the financial system during crisis events, then why are Central Banks still engaged in these programs nearly a decade later?

ORIGINAL SOURCE: The Fed Will Ignite The Next “Financial Crisis” by Lance Roberts of Real Investment Advice on 1/29/18