Ignoring the Elephant; as Long as Markets Rise, $21T Debt Must Be Okay

The rapidity with which the repetitive issuance of unpayable debt has become standard operating procedure – and the degree to which a complicit market has played along with the idea that this is not somehow extraordinary and ludicrous, cannot be overstated.

The central banks have had their Big Fat Thumb on the supply and demand scales in the money and capital markets so forcefully and so persistently that the reaction function of politicians has been decisively and destructively anesthetized.

Like money managers scrambling into harm's way of risk in their desperate search for yield, democratic politicians have lost all knowledge of and regard for the "crowding out" effect that historically kept their forebears on a reasonably straight and narrow fiscal path during peacetime. 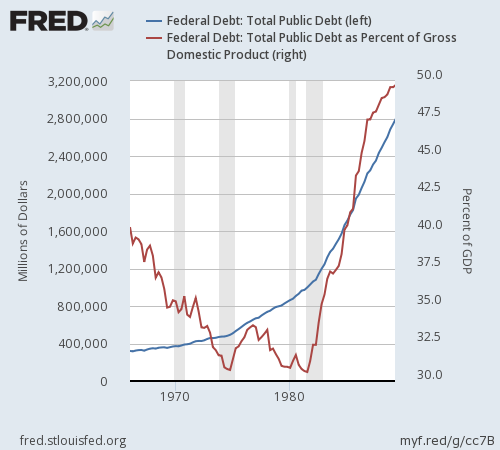 The key to understanding the "yield shock" coming down the pike, therefore, is to recognize the profound truth that what was taken for granted prior to 1987 by players on both ends of the Acela Corridor is not even recognized in either venue---let alone comprehended----in 2018.

So as the Fed pivots to quantitative tightening (QT) for the first time in decades----and at a scale that has never before been imagined because the Fed's balance sheet had never previously approached anything like a quintupling in just six years----the level of complacency on Wall Street and in Washington is staggering.

The fact is, a Fiscal Doomsday machine has now enveloped Washington in the form of a resurgent Warfare State, the demographically driven Welfare State, the fiscal madness of the current Trumpite/GOP ruling party and the outbreak of outright political warfare between the hinterlands and the Deep State.

Accordingly, there is not a snowball's chance in the hot place that the mother of all yield shocks can be avoided.

ORIGINAL SOURCE: $21 Trillion And Counting: Why Deficits Didn't Matter During The Age Of Monetization, 1987-2017 (Part 2) by David Stockman at David Stockman's Contra Corner on 3/20/18