Is Clark Kent Transforming into Superman? The Buildup in Gold Trading Volumes

It was one of the coolest scenes in the Adventures of Superman show: Clark Kent ripping back his business suit to reveal the Superman outfit underneath while he sprints to save the day. Probably millions of people have seen that transformation.

Well, a similar transformation may be underway with gold, one that shows this market may be ready to fly…

I noticed a curious development in a gold chart from my regular readings, one the author only made a passing mention of. I hadn’t seen it highlighted elsewhere either, so I decided to do a little digging.

And sure enough, what I found is that unbeknownst to most investors, gold trading volumes on the COMEX just hit a record high. 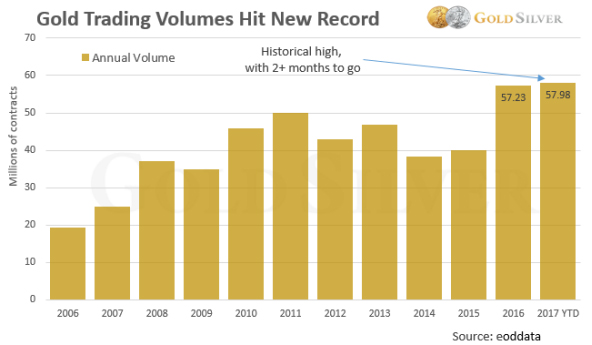 While virtually no one was looking, the amount of annual gold contracts traded on the COMEX reached a new historical high on October 20. With over two months to go.

You see that volumes both this year and last year are higher than 2011, when the gold price soared to an intraday high of $1,921. It was higher when traders dumped their holdings in 2013. And it’s already triple the levels of 2006. In other words, interest in trading gold has never been higher than right now.

To be clear, this data measures “trading” activity, so it includes both buys and sells. But the jump in volume both last year and this year is a bullish sign because prices have been rising. Gold was up 8.1% last year, and is up 11% so far this year. In other words, despite all the fretting about the drop in bullion sales, traders at the world’s biggest futures market are buying more gold contracts than they’re selling, a staunchly bullish indicator.

This dovetails with other bullish signs we’ve recently witnessed in the gold market, namely the spike in worldwide ETF holdings, which continue to hit record highs. The growth in the amount of holdings simply hasn’t let up…

Coin purchases may be down year-to-date, but this data clearly shows a growing buildup in interest for gold, particularly for professional traders and institutional investors since it is they who use these products.

Is the gold market about to shed its Clark Kent suit and turn into Superman? We’ll see, but it sure looks like he’s pulling back that first layer.

Either way, a major shift into the gold market is coming, folks. Don’t worry about the price, because sooner or later financial realities will set in around the globe and remind investors everywhere that gold is the one true monetary asset that can be trusted in times of turmoil.

In the meantime, I can tell you that we all at GoldSilver continue to prepare for the inevitable. Here’s what I just purchased.