Market pundits often think they know which of the millions of threads will be the one that unravels this, arguably the greatest melt-up bull market the US has even known.

But both the economy and equities markets are more complex and confounding than ever; algorithms and machines trade the majority of all stock market volume. In fact, last year JPMorgan estimated that just 10% of trades were by actual humans picking stocks.

So while all the players and prevailing winds bear watching and measuring, it’s hubris to think one can know what the one specific straw will be that breaks the market’s back. Preparing for the eventuality, knowing there will not be time to react when it does, is the key.

The world is full of anomalies. It may seem like a paradox, but financial markets are particularly eventful places. Something happens, some people notice, and most often it goes…nowhere. It’s all the time and a constant part of analysis, trying to identify and separate what is truly contained.

The global eurodollar monetary system grew so far and so fast in large part because of what was perceived as a robust structure. Chock full of redundancies providing boundless options, flexibility was a key dynamic. Money markets operated in seamless fashion so that if you didn’t like one funding channel you could easily switch to another. There was tremendous capacity behind it all to make sure it was normal. 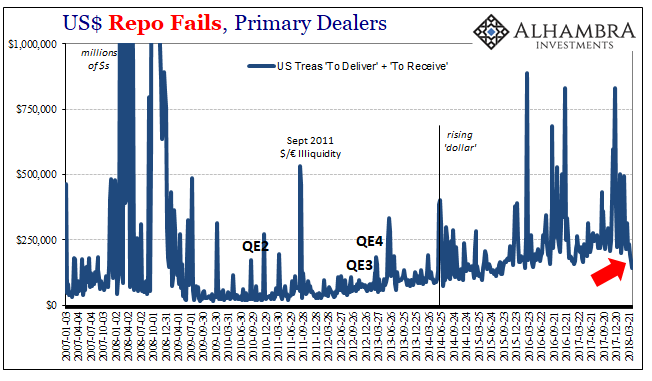 What happened on August 9, 2007, was the fracturing of the monolith. There was no single market for “dollars” any longer because there never was one to begin with. It seemed that way because while growing fast such energy provided the illusion of safety and flexibility. As it turns out, those redundancies proved to be just the opposite, fragile channels for spreading problems rather than containing them. Dysfunction revealed a tendency toward self-reinforcing negatives.

On this side of that divide, it’s not all chaos and contagion. Anomalies still happen, dysfunction is a constant feature, but there continues to be some minimal level of good function. The eurodollar may not work, but it at least keeps the lights on (for the most part).

But with greatly reduced function and resources (balance sheet capacity), there is a greater probability that the smallest thing becomes the proverbial snowball beginning its messy journey down the slope.

To put it into more specific terms, we might look at something like December’s massive spike in repo fails and immediately think that’s it! Something like that couldn’t possibly go unnoticed, and so “it” begins again. Fails spike, the dollar rises, and the next Lehman reveals itself no later than the following day.

These things aren’t one-to-one, however, and even the most violent crash is a lengthy process.

ORIGINAL SOURCE: Is It Over? by Jeffrey Snider at Alhambra Partners on 5/1/18