Ready Player Two: “The Next Crisis Will Be The Last”

Americans have become inured to so-called financial “crises”. How can one not be jaded when the federal government repeatedly hits some supposed “debt ceiling,” which then magically goes away, time and time again.

It will be interesting to see, when The Big One comes down the pike, how long it will take for people to figure out that this time, it’s not a drill.

For the Federal Reserve, the next “financial crisis” is already in the works. All it takes now is a significant decline in asset prices to spark a cascade of events that even monetary interventions may be unable to stem. As stock prices decline: 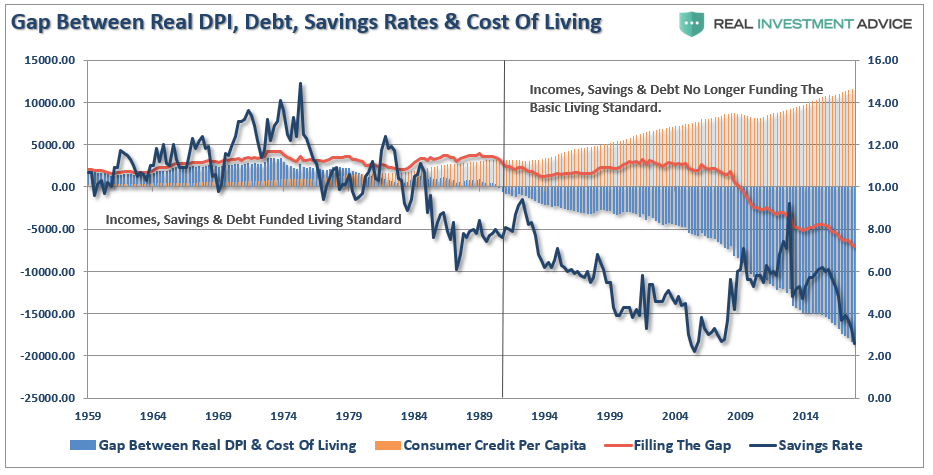 With the Fed tightening monetary policy, and an errant Administration fighting a battle it can’t win, the timing of the next recession has likely been advanced by several months.

The real crisis comes when there is a “run on pensions.” With a large number of pensioners already eligible for their pension, the next decline in the markets will likely spur the “fear” that benefits will be lost entirely.

The combined run on the system, which is grossly underfunded, at a time when asset prices are dropping will cause a debacle of mass proportions. It will require a massive government bailout to resolve it.

As debts and deficits swell in coming years, the negative impact to economic growth will continue. At some point, there will be a realization of the real crisis.

The issue for future politicians won’t be the “breadlines” of the 30’s, but rather the number of individuals collecting benefit checks and the dilemma of how to pay for it all. The good news, if you want to call it that, is that the next “crisis,” will be the “great reset” which will also make it the “last crisis.”

ORIGINAL SOURCE: The Next Crisis Will Be The Last by Lance Roberts at Real Investment Advice on 4/2/18