A compelling article from our friends at Sprott Asset Management, which starts by pointing out that while it's difficult to predict gold's short-term reactions to specific events, "there will be no quick fix for a global economy weaned on emergency liquidity." They believe an extraordinary opportunity has presented itself in precious metals, and as such have been telling their clients to "exploit summer price movements to their maximum advantage."

The weakness in the gold price may be confusing, given its strong fundamentals today, but the reason is tied directly to the US dollar. As emerging market currencies continue to weaken and even collapse, energy has funneled to the dollar, strengthening it and in turn weakening gold. The chart makes the correlation clear: 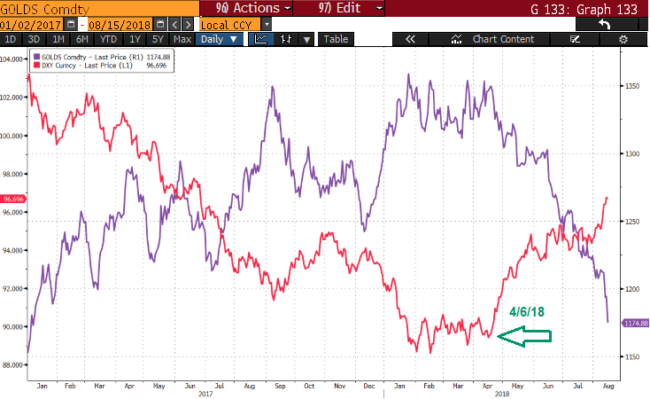 Short-term prices for all commodities are heavily influenced by COMEX trading. And it's no wonder: scant position limits, 4% margin requirements, and no need to pre-borrow collateral to sell short make it available to any and every multi-billion-dollar hedge fund. And gold positioning at the Comex is now unprecedented, as the chart shows: 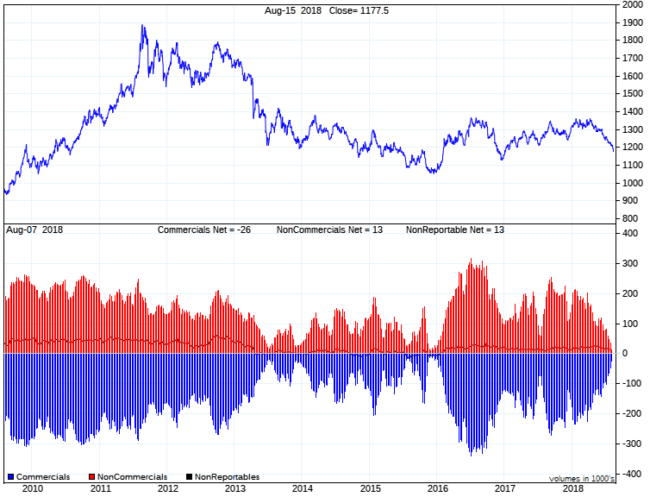 An Explosion in Gold Shorting By Hedge Funds

There are two flaws in being dollar bullish. First, it relies on longstanding relationships between asset classes which hold diminished relevance amid contemporary realities of excessive global debt levels and systemic fragilities. For example, as Sprott states, "why do dollar bulls think U.S. rates are suddenly free to rise without causing collateral damage today, when they have been unable to do so for almost four decades?"

Trump's Outright Weaponization of the US Dollar

Second, bullish dollar arguments turn a blind eye to the rapidly hardening global resentment of the dollar standard system. Look at Russia's reaction, for example: the Russian central bank liquidated $81 billion of Treasuries within weeks. "Are dollar bulls so jingoistic they believe the world has no choice but to accept a global monetary framework subject to borderline blackmail?"

Periphery to Core Accelerating: Turkey in the Headlines

Is Turkey's currency crash contained--or could its contagion spread? The country’s president has hinted that their debt obligations are too onerous to service, especially in the era of free central bank credit. Investors are advised to not confuse their “ability to pay” with their “willingness to pay.” As Sprott points out, "10 years of emergency monetary policies haven’t accomplished a damn thing other than compounding obligations of servitude." And its not just the emerging markets that have absurd debt levels. "The only unknown is how far up the chain the Fed is prepared to drive the process of global debt rationalization."

Domestic Dollar Hurdles: US GDP Not All It's Cracked Up To Be

The "strong" dollar has two hurdles that will keep it from remaining that way: first, US growth prospects are over-hyped; second, the country's fiscal position is rapidly deteriorating. Neither are sustainable. Check out their chart of the US Dollar Index vs. the Economic Surprise Index.

Sprott points to research that shows US real estate is already in recession: housing starts have collapsed at a 39% annual rate, building permits have receded at a 23% annual rate, new home sales have declined at a 22% annual rate, and existing home sales have contracted at a 15% annual rate. Further, there is a growing list of domestic cyclical groups--homebuilding, autos, transports, media and various retailing groups--beginning to signal sharply decelerating growth.

Sprott expects the euphoria over the high GDP number to fade by the end of the year, particularly when the mainstream realizes that "corporate profits have been financed through the zero-sum misdirection of an exploding federal budget deficit."

Sprott concludes with a chart we've not seen elsewhere: the IMF’s five-year forecasts for percentage change in government debt-to-GDP ratios in advanced economies. There is only one nation projected to increase its debt-to-GDP ratio during the next five years. Wanna guess who? 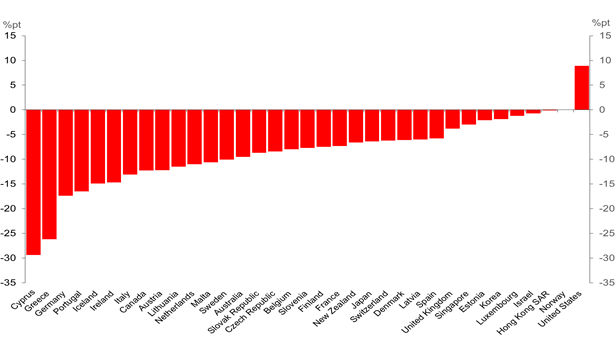 This is definitely not a recipe for relative US dollar strength.

As they sum up, "we still like gold's chances. In fact, an extraordinary opportunity is now presenting itself." We wholeheartedly agree.