That’s Not Liquidity, THIS Is Liquidity: Dotcom vs. Everything Bubble

Jerome Powell is viewed as a less reactionary, longer-term planner versus some of his Fed chair predecessors. Whether this means he will be too hesitant to react to real-time market indicators or has the mettle to see his strategy through (whatever it may be, as misguided as it may be) to its conclusion remains to be seen.

Working with what we do know, let’s pause and take a step back to appreciate this chart. Whereas Greenspan’s liquidity was felt immediately and acutely, this titanic round’s velocity has been much lower; its effects will be felt in full and in ways we haven’t even begun to fully appreciate, just not yet.

I don’t know if the current rate of interest is too high, too low, or just right for today’s economy. I have a guess, but it’s just a guess. But I know one thing. Over the past decade, there has been a huge amount of monetary stimulus applied to the global financial system. One of my favorite charts is the Federal Reserve’s total balance sheet. But what I love to point out is the Greenspan’s Year-2000-liquidity-flooding-stimulus that caused the final manic sprint higher in DotCom stocks. 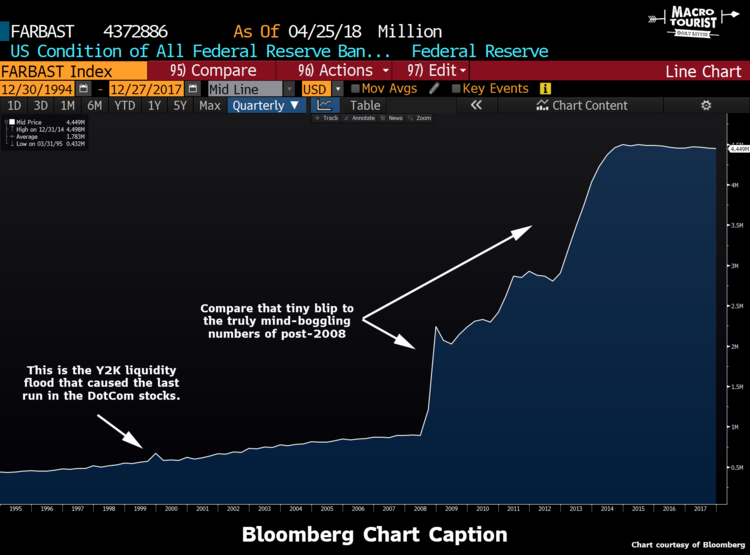 The reason that Greenspan’s Y2K liquidity boost had such a dramatic effect? Velocity of money was at its peak. The extra money went straight into the economy and had an immediate dramatic multiplier effect. This was in contrast to the collapse in the velocity in money since the Great Financial Crisis.

This is the “human element” that economists cannot incorporate into their model.

But what if that decline in the velocity of money has run its course? What if Trump’s pro-business plans, along with maybe even some infrastructure spending, combined with some household formation from the millennials, causes velocity to tick higher? What if this huge pile of monetary stimulus finally ignites and creates a self-reinforcing economic expansion?

Yeah, I know… Robust growth and inflation are never coming back. But then again, housing prices were never supposed to decline on a national level, so a good investor never says never.

ORIGINAL SOURCE: POWELL HAS A PLAN by Kevin Muir at The Macro Tourist on 5/2/18