“The Genie’s Out of the Bottle”: The Inevitable End of the Debt State

The tipping point is passed, even though when you look out your window, it seems like nothing has changed.

Trump’s election was a definitive defeat for the status quo. The fact that he has turned into the sort of don’t-tax-but-still-spend profligate that would make even the most seasoned welfare Democrat blush…well, that’s beside the point.

Despite uber-swamp Trump has created (welcome back, Bolton), votes for him were an attempt to drain that very swamp. There is no going back to the way it was before this reclamation of power by the powerless.

The saying "the worm has turned" refers to the moment when the downtrodden have finally had enough, and turn on their powerful oppressors. The worms have finally turned against the privileged elites -- who have benefited so greatly from globalization, corruption, central bank stimulus and the profiteering of state-enforced cartels. 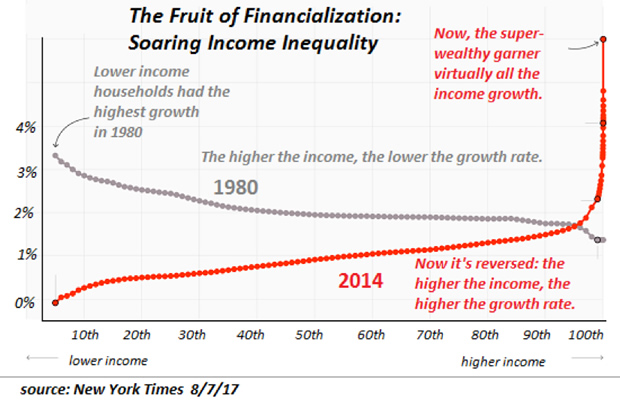 It doesn’t matter as much as the punditry assumes whether they are turning Left or Right; the important thing is that the powerless have finally started challenging their privileged overlords.

Though the Powers That Be will attempt to placate or suppress the Revolt of the Powerless, the genies of political disunity and social disorder cannot be put back in the bottle.

It took a generation of rising inequality, corruption and the erosion of opportunity to create a society of the protected (the haves) and the unprotected (the have-nots), and rubber-stamping more regulations and distributing Universal Basic Income (UBI) will not rebalance a system that is irrevocably out of balance.

But the rise of resistance, as yet nascent, is only half the story: economic trends and cycles are turning as well, and even if the worms remain passively underground, these reversals will disrupt the status quo.

The dominant narrative--the rightness, goodness and sustainability of endless growth of consumption and debt--will unravel, and the internal contradictions of this New Gilded Age (widening wealth/income/power inequality) will finally burst through the thin façade of stability that’s been patched together over the past nine years of “recovery.”

ORIGINAL SOURCE: The Genie's Out of the Bottle: Eight Defining Trends Are Reversing by Charles Hugh Smith at Of Two Minds on 4/11/18