Cheering recent US economy is “growth” is like cheering on a bonfire that is made of charred embers kept aglow only by a constantly poured stream of gasoline. There’s no sustenance underlying the pyrotechnics, no even-burning dry tinder to keep it going if the spigot of dirty, cheap, hot and fast fuel is shut off. 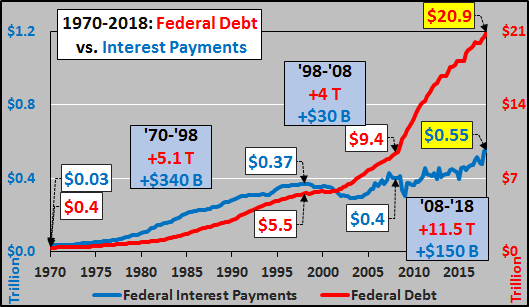 Over the same period, US GDP grew $5 trillion and 169 billion.  Simply put, for every $1 of new federal debt undertaken, the US achieved $0.44 cents of economic activity or "growth".

The US Treasury is telling you that between the federal debt and unfunded liabilities, the US is $70 trillion in the hole and despite record tax revenue, record stock and real estate valuations...the US is bankrupt.