The Machine Is Already in Motion: The Decline of the USD's Dominance

Does anyone at the top levels of the US government understand how far gone the fiat system truly is?

If they do, it’s a plausible argument to say they should get while the getting is good; if you can’t pay back the debt you already have, tack on as much new debt as you can while foreign buyers are still willing to buy it at all.

USDollar will no longer have sole global currency reserve status. As central banks across the globe discharge (dump) a sizeable portion of their USTreasury Bond holdings, they will seek alternatives. In the aftermath, Gold will benefit with more physical demand for bank reserves in direct asset placements without counter-party risk.

USDollar will no longer have sole trade payment status. It is losing its monopoly, led by oil shipments, the sole status lost to the Chinese RMB. The Petro-Yuan contract out of Shanghai is a major game changer. 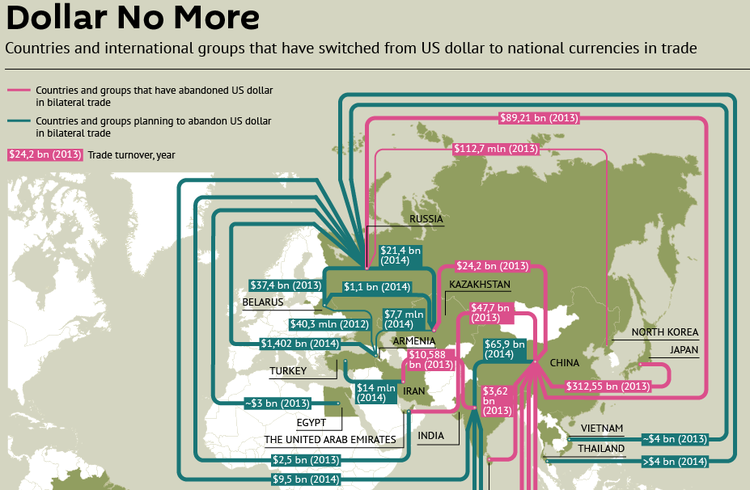 Nations must resolve trade imbalances. Since the abrogated 1971 Bretton Woods Accord, which had set the Gold Standard, the imbalances have grown without bound. The worst offender nation is clearly the United States, which exchanges fraudulent debt securities for finished products and commodity supply.

The USGovt debt will never be repaid, a fact gaining awareness. Thus the payment for ample imports in the form of USTBills and USTBonds is spurious at best, and fraudulent at worst. Nations will be forced to reduce imbalances, namely their trade deficits. In the aftermath, Gold will benefit with more usage in trade imbalance adjustments for bilateral resolution.

They will build their industry if they live beyond their means. The key will be the movements in many nations to build an export trade. Some movements will take on national priority. In the aftermath, Gold will benefit with more usage in trade deficit resolutions.