It’s gotten to the point where reading daily news reports can induce feelings of depression and anxiety. Maybe you have similar reactions when you see a constant barrage of negative headlines. They’re everywhere, and seem like they’ll never end. If you let it get to you, Covid-19 will turn into a Covid-depression.

Having a positive frame of mind is important in times like this, but neither do we want to be blindly optimistic. Sticking your head in the proverbial sand might feel good for a while, but it could be financially devastating if you leave it there.

We can’t change what’s happened, nor can we wish the virus away, but we can decide how we’ll deal with it. We can actively choose solutions that will help us weather the pandemic and its fallout, as well as prepare us for its ending, whenever that may be and however it may look.

There is lots of advice on personal strategies, but when it comes to our finances, there are three key things I am doing to get through this and come out the other side not only intact but with a handsome profit.

My strategies may not surprise you, but they’re important to me and I share them in case you find them useful. And they all stem from a realization of one thing in particular…

The Attack on Our Purchasing Power

Nothing puts the amount of currency printing and dilution into perspective better than the following chart. It compares the amount of quantitative easing in the US and G20 from the Great Financial Crisis (GFC) in 2008 to now. Notice not just the amounts but the timeframes. 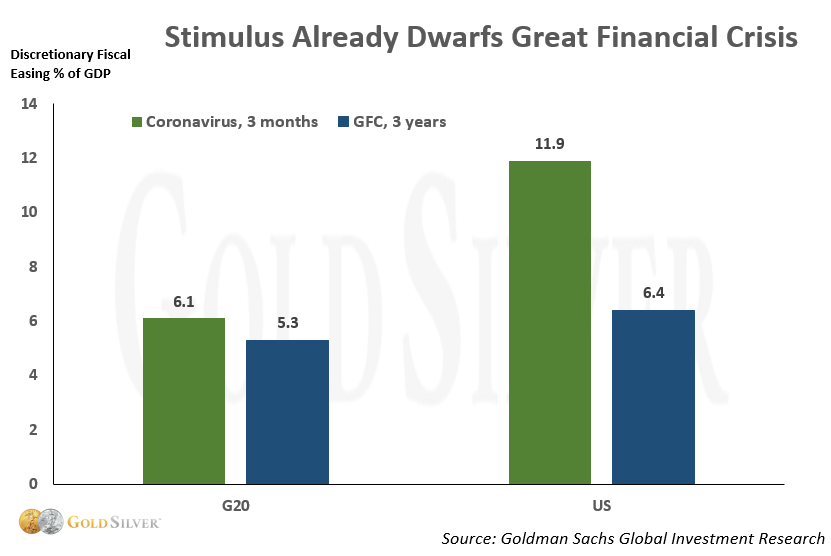 In just three months, as a percent of GDP, both the G20 nations and the United States have already exceeded the amount of QE done over the three full years between 2009 and 2011.

As you probably know, the amount of QE will continue to rise. It’s unlike the GFC when the Fed capped the amounts—this time, they’ve explicitly stated that QE is unlimited.

And it’s not just these easing efforts—it’s anything and everything related to our monetary system. Skim through this list and see what you think the ultimate ramifications could be to your currency…

We can debate whether these extreme measures are necessary or not. But one thing is clear: These actions dilute our currency. They erode our purchasing power. The full effects may not be felt today, but they will tomorrow.

In the midst of this gross monetary negligence, however, there are solutions. Here’s what I’m personally doing about it…

The Fed can print currency, but it can’t print gold.

This is at the core of what makes it, and will continue to make it, so valuable.

The runaway levels of monetary abuse will eventually lead to inflation. That may be tomorrow’s concern, but be careful waiting to buy your inflation insurance… your currency will buy more gold today than it will tomorrow.

There’s little doubt in my mind that the gold price will continue to climb. It will have down days, and yes it could have another mini-crash if the markets tank, but the ultimate direction is higher.

Even Americans in general agree it’s time to buy gold. A recent survey from our friends at Peak Prosperity showed that investors are beginning to favor hard assets and move away from paper assets. This trend is just getting started, and in and of itself could push gold higher.

What I don’t want in this environment is paper gold. We’ve pointed out their risks before, and now those risks have risen. Did you know there were days in March where GDX and GDXJ (mining ETFs) didn’t track their underlying assets? I could easily see this happening with bullion ETFs, too.

In my view, physical gold is likely to come in very handy in the environment ahead. We need gold for portfolio insurance, but we need physical gold for household insurance. An alternate currency that can’t be diluted and can be easily liquidated if the need arises. An asset that can serve more personal and direct needs beyond just a portfolio hedge.

When it comes to my finances, I sleep better owning real physical gold. So does Mike.

My father knew someone with a home safe full of gold that got robbed. The thing is, he had one of the best safes in the industry—but all it took was someone hearing about it and he and his wife were visited by two thieves. The end of the story is very unpleasant: his wife was tortured and he was killed, and the thieves made off with over half a million in bullion. Their kids had no recourse and no parents.

I bring this up because if this crisis does indeed go long and deep, social unrest is likely to grow. Which means if anyone knows you own gold, or heard that you own gold, or knows you have a home safe, or has heard you talking about gold, or sees pro-gold messages on your social media, and they’re having a hard time finding food to eat…

Even if you have the best safe on the market, ask yourself this question: what will I do if thieves demand I open it while they hold a gun or knife to my sweetie’s head? It’s a very unpleasant thought, but it’s worth discussing with your partner. Like I said, it happened to a friend of my father’s.

I’m not trying to scare you into using GoldSilver’s storage program. Some of you have heard my story of gold being stolen from my home, so this is personal with me.

What I am trying to do is encourage everyone to think about the risks of keeping all your gold and silver in the house. We should all have some bullion nearby, within easy grasp, but I’m not about to jeopardize my entire bullion nest egg by storing it all under the floorboards. Remember, it’s not just the loss of your purchasing power, but of the people around you who don’t know what to do and get desperate.

I hope I’m wrong about an increase in social unrest. But if it does grow, the importance of bullion security grows right along with it. I want to be prepared before it happens. You can too by storing your gold and silver in the same vault as Mike.

For me personally, debt reduction is a priority. A long-lasting recession or depression is trying enough, and carrying debt, even low-rate debt, could be an albatross and reduce your financial flexibility. I don’t want debt, I want options.

Like Mike, it’s also a good idea to keep some physical cash handy. He said he keeps a couple months of expenses—not because we think dollars are great, but that’s how commerce is conducted in our country. I like how President Alex Daley puts it: we spend in fiat, we save in gold and silver. That’s probably a good motto to live by right now.

There are other ways we can prepare. One resource I’ve found helpful is Peak Prosperity. They have a lot of useful ideas, and have an entire series devoted to how to build a resilient lifestyle.

The interesting thing about all these strategies is that you’re really no worse off if you never need them. Maybe a paper ETF doesn’t implode, maybe gold doesn’t pop to five figures, maybe I don’t get robbed, maybe social unrest doesn’t spread, and maybe the food chain doesn’t get interrupted.

But that’s too many maybes for me. How many of those can you live with?

Hang in there, my friends. There are probably rocky times ahead, but owning a meaningful amount of physical metal and storing it safely will go a long way toward getting through the crisis not only intact but profitable. Remember, more people became millionaires during the Great Depression than any other time in American history. Let’s be one of them so we can help the world in our own individual ways.

The Next Decade Will Likely Foil Most Financial Plans: Lance Roberts
More News