When the topic of a stock market crash comes up, the #1 question we get from gold and silver investors is this: won’t gold and silver crash, too? And if so, should I sell my bullion now and rebuy after the crash?

It’s an important topic, because while Mike and I are convinced gold and silver are headed much higher, one’s strategy can impact how much they profit. Or how little.

We don’t know how big a crash might be, and we don’t pretend to know the timing, but let’s look at the best ways for gold and silver investors to prepare for this likelihood.

The best place to start is by asking this question…

While no two selloffs are identical, the best clue we have about how gold and silver might perform in the next crash is how they’ve performed in past crashes.

Here are the S&P 500’s nine biggest crashes since the mid-1970s, and how gold and silver performed during each. The green boxes mean they rose, yellow means they fell but less than stocks, and red signifies they fell more than stocks. 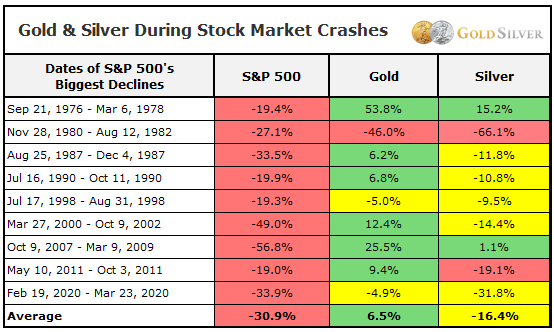 On average, gold has risen during stock market crashes. Twice it fell but less than stocks, and only once did it fall more than stocks, though I’ll point out this was immediately after gold’s biggest bubble in history.

Gold even climbed in the biggest stock crash of all: the 56% decline that lasted two full years in the early 2000s. And during the sharp decline last March, where stocks fell by a third, gold declined less than 5%.

The historical record suggests that one can’t assume gold will fall in a stock market crash—the exact opposite has occurred much more often.

Silver, on the other hand, has not fared as well. In fact, silver rose in only one of the S&P selloffs and was basically flat in another one.

This is the result of silver’s high industrial use (about 55% of total supply) and that stock market selloffs are usually associated with a poor or deteriorating economy.

However, you’ll see that silver fell less than the S&P in all but one crash. This is significant when you consider how volatile silver can be.

There’s been other research on this topic, too…

The World Gold Council did a correlation study on the degree of stock market selloffs and gold’s response. 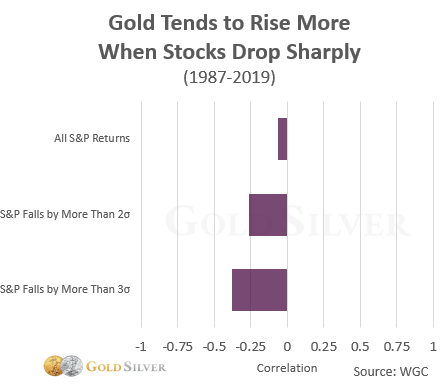 This study found that the bigger the stock market crash, the more gold rises!

By the way, given the mainstream’s obsession with stocks, I’m not sure I’d rely on them to provide the best strategies against a stock market crash… in one bizarre example, Money Magazine’s article said a couple years ago that if one is afraid of a stock market crash, then the solution is to—I kid you not—buy more stocks! You can judge it for yourself, but it elicited some snarky remarks from me: The Modern Day Nincompoop—Money Magazine’s Advice on How to Survive a Stock Market Crash.

There are many great benefits to physical gold and silver, and one of those is that they’re largely uncorrelated to other investments.

In other words, when one goes up, the other tends to go down.

This makes sense when you think about it. Stocks benefit from economic growth and stability, while gold benefits from economic distress and crisis. If the stock market falls, fear is usually high, and investors typically seek out the safe haven of gold.

This doesn’t mean gold will automatically rise with every downtick in the stock market. In the biggest crashes, though, history says gold is more likely to be sought as a safe haven.

A common frustration of us bullion buyers is that when metals prices fall, our purchase price is not always as low as we expect it to be.

That’s because demand tends to jump when spot prices dip—and that drives premiums higher. So even if prices are lower, your total savings may not be all that significant, especially on popular products.

Mike and I noticed this during the stock market crash in late 2008 and 2009. Premiums on gold and silver spiked so high that investors only saved a total of about 10% on Silver Eagles... the silver price was a lot lower, but premiums skyrocketed and the net savings for most investors at the time was minimal. And they had to wait weeks or months for delivery.

And as many of you know, the same thing happened last year. In fact, premiums still haven’t normalized that much. If a crash came now it would likely lead to another surge in demand—and a further spike in premiums.

My goal here is not to convince you to not sell your metal, or even guarantee you they won’t fall in the next stock market decline. I simply want to make sure investors are aware of these factors before they make any decisions.

So What Do We Actually Do?!

How can the gold and silver investor prepare for a stock market crash?

There are three options you can consider. I employ all of them…

Hold. In other words, don’t sell in anticipation of a stock market crash. Hold through it.

Plus, what if you sell and the stock market doesn’t crash for another year? You could lose out on potential gains from your metals.

Another reason to consider holding is that numerous studies have shown that 90% of traders ultimately lose. What makes it tough is the timing; even with lots of fancy tools available one never really knows when to pull the trigger. Are you confident in your market timing abilities?

I look at it this way: I’m holding for a bigger payday, even if there’s a temporary downdraft. By focusing on the big picture I have less concern about a selloff in gold and silver becoming permanent. I thus plan to hold what I have through any stock market crash. So does Mike.

Build Cash. A selloff in gold and silver is always possible, even without a stock market crash.

One way to blunt any pullback is having a healthy stash of cash.

Since I’ve concluded that silver and gold prices have further to rise, cash empowers me. Cash gives me the ability to power through any correction that might come, as well as the ammunition to take advantage of it if I wish. If you’re someone who worries about price corrections, having a meaningful amount of cash set aside might help.

How much cash? My personal answer is this: enough to buffer my portfolio if a crash does come, but not so much that I don’t profit if there isn’t one.

Holding my bullion and building cash is my two-pronged strategy: cash allows me to buy more if we do get another big decline in gold and silver, but also be positioned with my existing stash of bullion in case the next crisis sends them off to the races.

Dollar Cost Average. Get your paycheck at the end of the month? Put a little in some real money each payday. Automatically buying when you get paid is a great way to build up your ounces and worry less about the price.

Dollar cost averaging is a proven strategy. It takes emotion out of the equation, and it avoids “bad luck” timing—if you buy all at once and the price falls, you’re stuck. But if you buy in tranches you automatically take advantage of downdrafts.

There’s an easy way to dollar cost average, too…

GoldSilver.com’s new InstaVault program is an easy way to instantly buy or sell directly from the vault.

You’re still buying real physical gold and silver, but now you get the low premium that only comes with large bulk bars. It’s probably the most flexible and cost-effective way to invest in physical precious metals. And as always you can take delivery or sell at any time.

There are a number of advantages, check them out here for gold and here for silver.

When Will the Stock Market Crash?

Nobody knows that answer. The Fed and other central bankers remain highly accommodative, but there’s no denying the market is overvalued, and nothing goes up forever.

Perhaps the wisdom of Pericles applies here: "The key is not to predict the future, but to prepare for it.”

We can’t predict when a crash might come or how big it might be, so the best strategy is to just prepare. I hope this article helps with your preparations.

Long-Term Relationship Between Gold and Stock Market
Russia’s Intentions Are Clarifying: Alasdair Macleod
Longtime Gold Market Crook Deutsche Bank Wants Back in the LBMA: Ronan Manly
More Lies in the CPI
After the Boom Must Come the Bust
Price Inflation Slows, But the Economy Keeps Getting Worse
What Do Initial and Continued Claims Suggest About Timing of a Recession?
Kansas City Fed Services Survey Tanks To -11 In January As Fed Withdraws Monetary Pu...
China and the US at Sovereign Debt War
World War III: Has It Begun?: Rickards
"The Bot Is Out There. It Doesn’t Feel Pity, Or Remorse, Or Fear, And It Absolutely...
Labor Shortage Talk Turns to Job Cuts
IRS Alerts Taxpayers They Must Answer a New Question On Tax Forms Or Face Consequenc...
Americans Fall Behind on Car Payments at Higher Rate Than in 2009: Bloomberg
Pending Home Sales Suffered Worst Annual Decline Ever In 2022, Despite December Surg...
More News