This is the best chart you will see all day, and dramatically encapsulates the extremity of the market’s current overvaluation.

The die is set. The cake is baked. The pigeon has flown the coop: This market is extended to never-seen-before overvaluation levels. Of course, once a market is this unhinged, this separated from reality, trying to quantify exactly how crazy the crazy will get is a fool’s errand. It’s anyone’s guess.

But the fact remains: Market valuations have never, ever been this overstretched without crashing more than 50%. 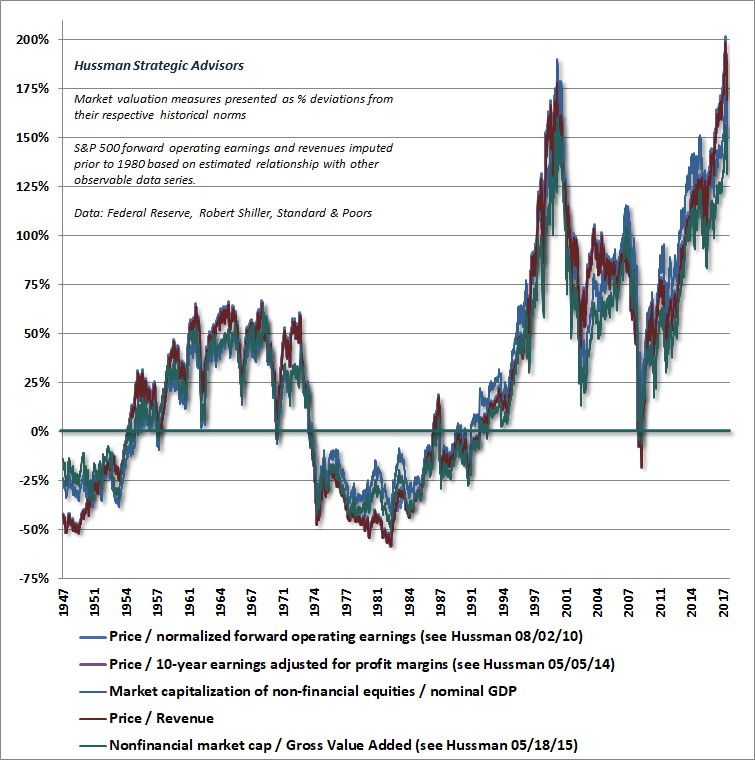 This chart presents several valuation measures we find most strongly correlated with actual subsequent S&P 500 total returns in market cycles across history. They are presented as percentage deviations from their historical norms.

At the January peak, these measures extended about 200% above (three times) historical norms that we associate with average, run-of-the-mill prospects for long-term market returns.

No market cycle in history – not even those of recent decades, nor those associated with low interest rates – has ended without taking our most reliable measures of valuation to less than half of their late-January levels.

Don’t imagine that a market advance “disproves” concerns about overvaluation. In a steeply overvalued market, further advances typically magnify the losses that follow, ultimately wiping out years, and sometimes more than a decade, of what the market has gained relative to risk-free cash.

Imagine the error of skating on thin ice and plunging through. While we might examine the hole in the ice in hindsight, and find some particular fracture that contributed to the collapse, this is much like looking for the particular pebble of sand that triggers an avalanche, or the specific vibration that triggers an earthquake.

In each case, the collapse actually reflects the expression of sub-surface conditions that were already in place long before the collapse – the realization of previously latent risks.

Finding the specific trigger that causes the skaters to plunge through the ice isn’t particularly informative. The fact is that catastrophe is inevitable the moment the skaters ignore the latent risk, or rely on faulty evidence to conclude that the ice is stable.

The fracture in some particular span of ice is just one of numerous other spots that might have otherwise given way if the skaters had chosen a different course. Hitting that spot creates the specific occasion for the underlying risk to be expressed, but an unfortunate outcome was already inevitable much earlier.

A Bear Market in Bonds Is Beckoning