These Headlines Say Gold is Building a Base for Something Big

It may be frustrating to watch the gold price remain dormant as stock markets continue to push higher. But while cryptos and Trump grab a lot of the headlines, you might be surprised to know there are significant forces behind the scenes that signal the gold market is not only strong but suggest something big is coming.

Demand for coins and bars in North America may be low, but that’s not the whole market. Check out what occurred around the world last quarter…

Chinese coin and bar demand hit the second highest volume on record. In the third quarter, demand for physical metal rose an incredible 57% over the same period last year.

South Korea demand jumped 42%. It’s admittedly a small market, but this shows once again that investors turn to gold when geopolitical tensions rise.

It’s clear that demand for physical metal is surging in many areas around the globe.

The Central Bank of Russia bought 63 tonnes, pushing their gold reserves to 1,778.9 tonnes. I like this quote from Russian newspaper Kommersant: “If US sanctions are expanded to block Russia’s assets invested in US Treasuries, gold will be a magic wand." The trend is expected to continue, says Alexander Losev of Sputnik Asset Management: “The regulator will continue to amass gold in its reserves, decreasing the share of US Treasuries.”

The Central Bank of Turkey has gone bonkers for gold, its reserves now more than 50 tonnes higher than April 2016. Here’s what Turkey’s gold imports look like so far, from our friend Nick Laird of goldchartsrus.com: 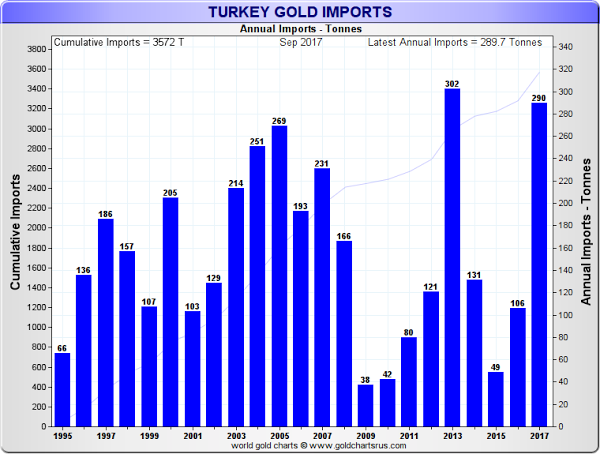 You can see that a new record will almost certainly be set by the end of the year.

Other central banks increased their gold reserves last quarter, too…

While these increases are small in the big picture, it demonstrates that central bankers in emerging markets continue to see the need to add gold to their reserves.

Why are so many central bankers buying so much gold? They clearly see the need to denominate their reserves in physical metal.

Technology demand for gold rose 2% over the same period of 2016, reports the World Gold Council in its Q3 report:

Kuwait Plans to Build a $112.5 Billion 'Gold City.' The Ministry of Commerce and Industry asked Kuwait Municipality to allocate a plot to build a special “gold and jewelry city” over a 100,000 square meter area, which would make it the largest of its kind in the region.

The new “Gold Connect” exchange links the gold markets of Hong Kong and Shenzhen, and on the first day over nine hundred kilos of gold traded, worth 300 billion yuan, or $38.45 billion in US dollars. That’s not exactly chump change.

Hedge funds and money managers cut their long positions the past couple months, but their net positions are still higher than the start of the year.

According to Zero Hedge, Ray Dalio went on a gold buying spree last quarter: he increased his GLD holdings by a whopping 575% and became the 8th largest holder.

New Gold Supply Is About to Start a Long-Term Decline

If they’re right, new gold supply will fall by almost one-third by 2025. There’s no way that doesn’t have an enormous impact on the market and prices. Read our original article to see how you could be impacted.

“The low-hanging fruit has likely already been picked” says Frank Holmes of US Global Investors. Explorers have to dig deeper… they have to venture further into more extreme environments to find economically viable deposits… regulations are tougher… production costs are higher… and no new method has been invented to extract gold from hard-to-reach areas.

“Silver’s role in the auto industry will continue to grow due to safety upgrades in both human-powered and driverless autos, rear cameras, night vision, rear-object detection, and lane departure,” reports Steve Gehring, VP of safety and connected automation at trade group Global Automakers.

“Silver’s use in solar panels will increase at least through 2020,” says Larry Wang of Heraeus Photovoltaics. This despite panel manufacturers actively working on ways to reduce silver loadings per cell.

Silver paste is used in solar panels, and this chart shows the dramatic increase expected in demand over the next few years.

New Silver Supply Is Falling, Too

Gold Says, “The Future is Mine”

Add all this up and it’s hard to ignore that something seems to be gelling in the gold and silver markets. Future headlines will someday soon have a different tone, which will richly reward those who have stayed the course. Don’t be fooled by flat gold and silver prices—many investors around the world continue to add to their holdings, and new supply for both metals is about to start a long-term downtrend

In the meantime, I continue to use the current soft environment to add physical metals to my portfolio. Check out the brand new Canadian Maple Leaf, both gold and silver, what are widely considered to be the most secure sovereign coins in the world.