In another riff on an all-too-familiar theme, we see the dawning recognition that an extremely obvious, unsustainable debt situation will only be dealt with at the very last possible moment. Once it’s reached full-blown, point-of-no-return crisis mode.

Until then? Some other politician’s problem.

Unfunded pension obligations have been a slow-burning forest fire for years. Existing in plain sight, clear to all who cared to take even a passing glance. But so long as there were still a few more trees not yet burning, as long as this month’s check still cashes, who cares, really?

Warnings about looming public pension disasters have regularly cropped up since the 1950s, pointing to problems 25 years or more down the line. To politicians and union leaders, the troubles were someone else's predicament. Then crisis fatigue set in as the big problem remained down the road.

Today, the hard stop is five to 10 years away, within the career plans of current officials. In the next decade, and probably within five years, some large states are going to face insolvency due to pensions, absent major changes. 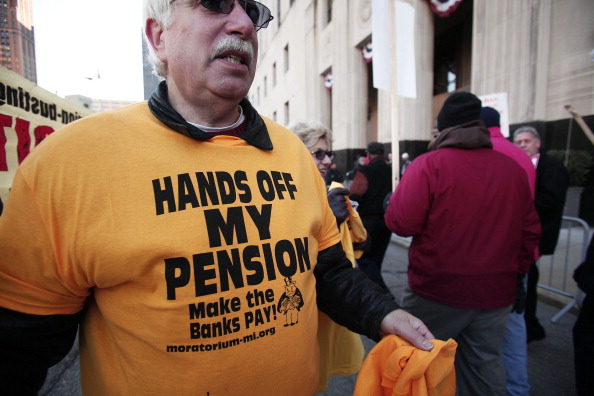 The next phase of public pension reform will likely be touched off by a stock market decline that creates the real possibility of at least one state fund running out of cash within a couple of years.

The math says that tax increases and spending cuts cannot do much. For one thing, as we learned from Detroit, at a certain point high taxes and poor services force people and businesses out.

The numbers are just too big in some states to come out of the budgets. For another, voters won't stand for it. The voters in these states have refused for decades to pay the full costs of the services they were already enjoying; they're not going to have sudden conversions to paying full costs, plus the accumulated costs from the past.

State constitutions will be amended if necessary and big legal battles will be fought. I cannot see any plausible scenario in which full promised benefits are paid.

ORIGINAL SOURCE: The Collapse of Public Pension Funds Is No Longer a Distant Prospect by Aaron Brown at Bloomberg on 4/18/18