Gold in 2021: A Fed Pivot and Stubborn Inflation Give Hints About 2022

Our quarterly report—what we prepare for institutional investors—examines the performance of gold and silver vs. other major asset classes during the fourth quarter and full year of 2021. We also review the conditions that could ignite their prices in 2022.

The big story in 2021 was the jump in inflation. And then the Fed’s announcement in Q4 that it plans to raise interest rates multiple times in 2022. Gold and silver ended last year slightly lower, but with new policy and economic shifts emerging, are they poised for a reversal to the upside? Let’s start by looking at their context…

Gold and Silver Rebound in Q4 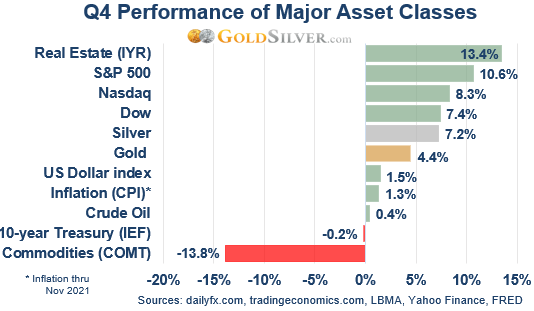 2021 ushered in some long-desired optimism on the part of investors and consumers, despite lingering effects of the pandemic. The economy rebounded and markets soared. 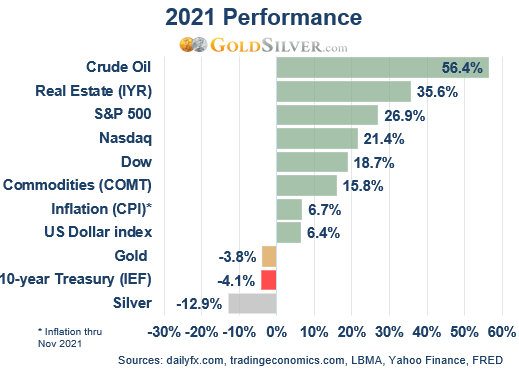 Oil and real estate were clear winners last year, along with the broad stock market.

Which begs the question…

Why Were Gold & Silver Down With Inflation Spiking?

It’s confusing that gold and silver would be weak in a year that saw inflation rise both abruptly and significantly. A deeper analysis provides some answers:

The question in front of investors now is, do these trends continue—or do they reverse and unleash the next uptrend in gold and silver prices?

While market and economic risks are always present, it’s hard to overstate the number of potholes in the road as we enter the near year. The following factors could serve as a catalyst for gold and silver in 2022.

Pandemic Persistence. Omicron appears less virulent than previous variants but is more contagious, which means that hospitalizations could remain high. Omicron was responsible for at least 41% of all U.S. Covid cases in December. Its spread could suppress consumer demand and exacerbate supply-chain bottlenecks.

Stubborn Inflation. According to research firm IRI, food prices are expected to rise 5% in the first six months of 2022. Wheat and corn were each up over 20% in 2021, while soybeans hit a third consecutive year of rises. Will they stay elevated? According to the CEO of fertilizer giant Yara International, that answer is a resounding yes. “I want to say this loud and clear right now: we risk a very low crop in the next harvest. I'm afraid we're going to have a food crisis.” Consumer analyst Julie Ramhold at DealNews.com was equally bleak about higher food costs: “I really don’t think there’s any way to escape.”

And it’s global. UK inflation is already over 5% and is expected to hit 6% in 2022, what would be a 30-year high. Alcoa in Spain halted aluminum production for two years due to soaring energy costs, Europe's second-largest aluminum plant, and the biggest aluminum smelter had cut output the week before. India's market regulator suspended futures trading in farm commodities to fight inflation. And of course Turkey has runaway inflation, its annual rate recently hitting 36%.

Citizens feel it, too. According to a Bankrate survey, 26% of Americans believe their financial situation will be worse in 2022, and of those 70% blame inflation. “People are getting worried about inflation continuing to rise,” reports Forbes.

It’s true that some parts of the current inflation spike probably are transitory—but now wages are rising, which could keep inflation elevated for years. If so, the Fed will be under increasing pressure to raise interest rates. Which ushers in problems of its own…

Interest Rate Increases. The Federal Reserve announced it will raise interest rates multiple times in 2022. “It’s going to be the first time in almost two years that the Fed’s incremental decisions might force investors or consumers to become a little more wary,” says David Schawel, CIO at Family Management Corp.

To the surprise of many investors, gold and silver have historically risen during rate hike cycles. They tend to fall at the initial hike, but in the last four periods they both ended higher by double digits.

The bigger question is, will rate increases take some air out of the economy or stock market? When combined with a reversal in the Fed’s emergency asset purchases, it’s hard to imagine there being no impact.

Growing Gold Demand. Comex gold deliveries in 2021 were more than triple the 15-year average. U.S. Mint gold coin sales hit their highest level, over 1.25 million ounces, the most since 2009. In China, retail gold sales have rebounded, with the strongest sales surprisingly coming from 20- and 30-year olds. In India, gold imports hit a record $55.7 billion in 2021, surpassing 2019’s high and more than double 2020.

Meanwhile, central banks continue to buy gold, with global reserves now at a 31-year high. As a group they’ve been net buyers since 2010, and this shows no signs of letting up. According to a survey by the World Gold Council, for the first time in years the #1 reason emerging market central banks bought gold is its “performance during crisis situations.”

Fed Watch and Debt. In addition to the normal rotation of voting members, the Biden administration will fill three vacant seats on the Fed’s Board of Governors. Public comments from the other three Federal Reserve Bank presidents suggests that the 2022 committee will be more “hawkish.”

Meanwhile, the Fed's commitment to phase out Libor isn’t completed (as was projected to end last month). According to the Financial Times, there are still $230 trillion in existing contracts that rely on the benchmark. This is the moment when the past four years of preparation to live without it goes into effect. Dixit Joshi, group treasurer at Deutsche Bank, said “It’s one of the biggest transitions in financial markets in decades. This is a milestone for the regulators.”

Last, US debt continues to not only grow, but according to Treasury data it increased in December by 50% of what had been seen in all of 2021.

Frothy Investment Markets. By almost any measure, financial markets remain frothy, if not outright bubbly. Stocks are expensive, real estate prices are far above their mean in most advanced economies, meme stocks and crypto assets are still arguably in a craze, and government bond yields remain ultra-low. Any sort of “normalization” process could deflate asset prices—and drive investors to gold.

Midterm Elections. While not until November, it goes without saying that the US is experiencing an elevated level of political polarization. Democrats have a minor advantage in the House and a thin majority in the Senate; with President Biden’s low approval rating, Republicans would be able to block any legislative move by winning one chamber. This will likely push Democrats to make big changes before the election, including finally passing their social spending bill and perhaps higher taxes, the latter of which could hurt stocks.

U.S. Dollar Weakness? Most analysts seem to agree that the first couple months of 2022 could be kind to the dollar. However, a number of them see it as vulnerable, based on a positive climate for risk and commodities, along with simple overvaluation. Also, some chartists say the dollar has broken down through support.

Military Interventions? President Biden has repeatedly warned Russian President Vladimir Putin that he is prepared to “respond decisively” if Russia invades Ukraine. Some argue the Russian economy has become more resilient to sanctions than it was in the past, so such threats may be less of a detriment, perhaps increasing the likelihood of an invasion.

Meanwhile, China has increased its military pressure on Taiwan and in the South China Sea, where territorial disputes continue to brew. And Iran is now on the threshold of becoming a nuclear state, with negotiations basically going nowhere. In response, Israel has openly stated it is considering strikes against Iranian nuclear facilities.

I think Hilary Allen, law professor at American University, asks a good question. “Is the current moment the dot-com bubble—or the lead-up to the 2008 financial crisis? If it’s just a dot-com bubble, it sucks for investors. But if it’s 2008, then we’re all screwed, even those of us who aren’t investing.” Either answer argues for investors to be prepared.

And there’s perhaps no better way to get you and your portfolio ready than by attending the Wealthion online conference on January 22.

I’ll be presenting along with a panel of 14 of the sharpest financial experts who will give their strategies for navigating the year ahead.

Precious metals investors will enjoy the mix of macro insights, commodity and hard asset specific investment presentations, and as well as the chance to interact with like-minded speakers and attendees.

Here are all the details of the online conference including the full line-up of speakers and the agenda.

The other way you can prepare today is to check your physical gold and silver holdings to make sure you have the ounces you need for the road ahead.

The circumstance of stubborn inflation, elevated political conflicts, and overpriced stock and real estate markets creates an ideal scenario for gold and silver.

Based on the number and potential severity of the risks entering 2022, it would not be surprising to see the gold price achieve new record highs this year. And silver to outperform if gold takes off.