Gold in Q3: Attack of the US Dollar!

As Federal Reserve Chairman Jerome Powell made clear last month, the US central bank will be “resolute” in fighting inflation. That translated into sharply higher interest rates, and as a result a soaring US dollar.

The Fed approved a third consecutive 75-basis-point hike in September, the fifth raise this year. This is the most aggressive move since the 1980s. The US dollar soared in response, pressuring many assets including gold and silver since they’re priced universally in dollars.

Our quarterly update looks at the performance of gold and other major asset classes in the third period of 2022, along with year-to-date. We also highlight the conditions that will likely impact gold and silver in the final quarter of the year.

Q3: All Hail the USD

Interest rate hikes and the unrelenting rise in the US dollar wreaked havoc on most asset classes last quarter. 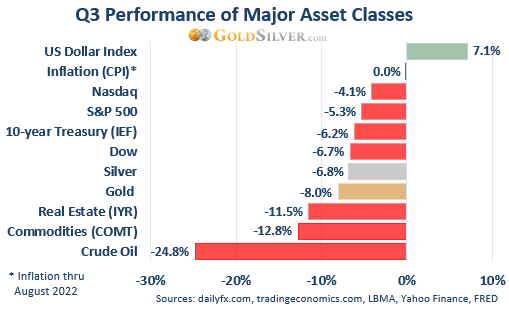 Silver continued to struggle, down 6.8% on the quarter.

The US dollar rose over 7%, a strong move for a currency in a short period of time. Its unabated rise pressured stocks, Treasuries, commodities, real estate, and gold and silver.

Inflation showed signs of leveling out, but we’re not holding our breath that the Fed gets it back down to their 2% target. The pullback in crude oil was significant, though not surprising given the extent of its recent run.

Gold is down 8.2% YTD, but that performance is a significant improvement over stocks, Treasuries, and real estate. 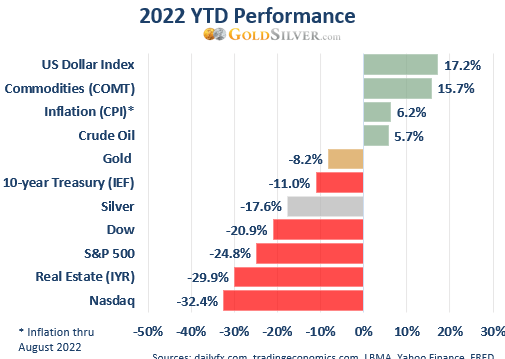 Silver is now down over 17% on the year. It’s been gradually falling since hitting $30 in August 2020, with some short-lived rallies along the way, like Monday’s nearly 9% climb.

To state the obvious, common stocks have not fared well in 2022. The Nasdaq is down by a third, and the S&P 500 has now posted a rare third straight quarterly loss. Crude oil has fallen back to small gain on the year.

What Does Q4 Bring?

It’s hard to imagine a rockier environment for the final quarter of the year.

Interest Rate Aggression: The Fed’s benchmark lending rate is now in the range of 3%-3.25%, the highest level since the global financial crisis in 2008 and the toughest policy move since the 1980s.

Will it get inflation down to the Fed’s 2% goal? Most economists point out that the elevated CPI is more about supply chain issues, not overheated demand, and thus may not be helped by higher rates.

They can debate it all they want, but history shows higher interest rates are no free lunch. They’ll likely slam businesses and households hard, since borrowing costs are now significantly higher on homes, cars, and credit cards. History also shows that rate hike cycles have led to higher unemployment and lower government revenue, due to lower personal income and corporate taxes.

When will the Fed pivot? The answer to that question likely signals when many assets, including gold, reverse and turn higher.

Recession Watch: The claims made by some in the mainstream that GDP was too strong for the US to experience a recession now seem particularly short-sighted. As one example, the Chicago PMI survey plunged unexpectedly into contraction in September, its lowest level since June 2020. In fact, every underlying component fell from the prior month.

And as Mike Maloney showed, the yield curve (10-year Treasury yield minus 2-year) also turned negative last quarter, an event that has predicted the last 6 recessions.

Meanwhile, both the International Monetary Fund and the World Trade Organization warned that countries around the world are sliding into a global recession. World Bank President David Malpass said developed countries should equally prepare for an economic slowdown. “A series of harsh events and unprecedented macroeconomic policies are threatening to throw development into crisis… This has consequences for all of us due to the interlinked nature of the global economy and civilizations around the world.”

Stock Market Vulnerability: 2022 has so far been the worst year for markets in five decades. Both bonds and stocks sold off in unison, so traditional 60-40 portfolios had nowhere to hide, a fact that highlights the advantage of gold.

According to Bloomberg, a whopping $32 trillion in global stock market value has been lost since November 2021. Many economists state the market remains vulnerable until the Fed reverses course, a fact history bears out.

Affordability is now the name of the game in housing. With mortgage rate climbing and rents stubbornly high, demand is likely to ease, bringing down prices.

European Headwinds: Europe’s energy crisis is growing serious. Energy prices are 44% higher than a year ago, largely a result of Russia bringing gas exports to a standstill. As a result, Germany announced a €200 billion ($195B) bailout plan. Combined with a 19% rise in food prices, inflation is now 10%, the highest level since reunification in 1990. In response some ministers have caped gasoline prices.

Protests also erupted in Germany, the Czech Republic and other European countries. Then the NordStream II pipeline was blown up.

Meanwhile, the Bank of England pledged unlimited bond-buying to avert what some view as an imminent gilts crash. Its 30-year yield fell the most on record last month.

Debts and Deficits: Deficit spending in the US continues at near-record levels, with Biden’s student loan forgiveness plan still in the works, passage of which would likely lead to higher taxes and/or more deficit spending.

The US ended the fiscal year with $30.928 trillion in debt, an increase of $2.5 trillion over the prior fiscal year.

The issue with such elevated levels of debt is that higher rates make interest payments an increasingly bigger part of the government’s budget.

US Elections: US midterm elections are next month, with the country as polarized as ever. The Stock Trader’s Almanac reported that since 1946, the second year of a new Democratic president has ended with the S&P 500 losing an average of 2.3%.

Crypto Weakness: Bitcoin and other cryptos remain weak, the industry getting far less attention from investors and speculators than it did a year ago. It seems apparent cryptos are now largely viewed as a risk-on asset class.