Here’s Every Gold & Silver Correction in Their Two Biggest Runs, vs. Today

If you’re familiar with Mike Maloney, you probably know he (and I) actually like it when gold and silver prices correct. It gives us an opportunity to add more ounces at a better price.

But not every investor likes corrections. For some it’s worrisome. Others want to know why the price is falling. Still others wonder if the correction is over and a good time to buy.

The recent drop in gold and silver brought up these concerns again. So I thought it was time to examine that abrupt selloff and compare it to other corrections during similar periods. By viewing corrections in context, and through the lens of history, I think you’ll see that yes indeed, corrections are nothing buy buying opportunities in bull markets.

Let’s look at the two biggest gold and silver bull markets and compare them to today, starting with the granddaddy of them all, the late 1970s…

Most of the gains from the 1970s bull market occurred in the final year. And yet during that runaway surge, there were numerous corrections in a relatively short time frame.

Here were gold’s corrections of greater than 3%, along with the total percentage gain made during that final 13 month-period. 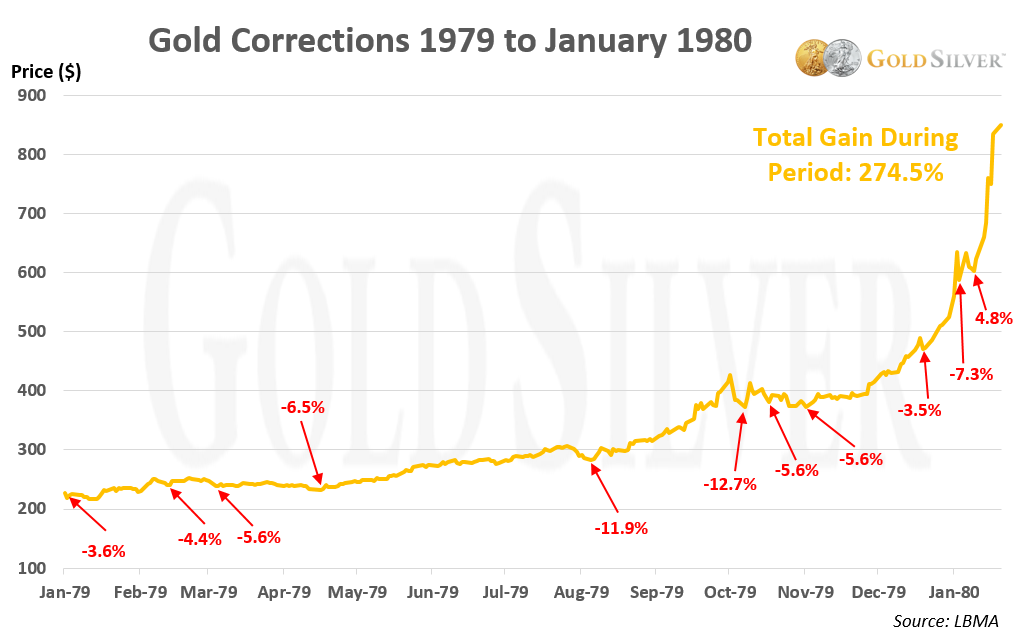 The gold price fell more than 3% a total of 11 times during that final year. That’s almost once a month. Two were double-digit declines. All this while the price shot up 274.5%.

Now check out silver’s corrections during the same period, in this case those of 5% or greater. 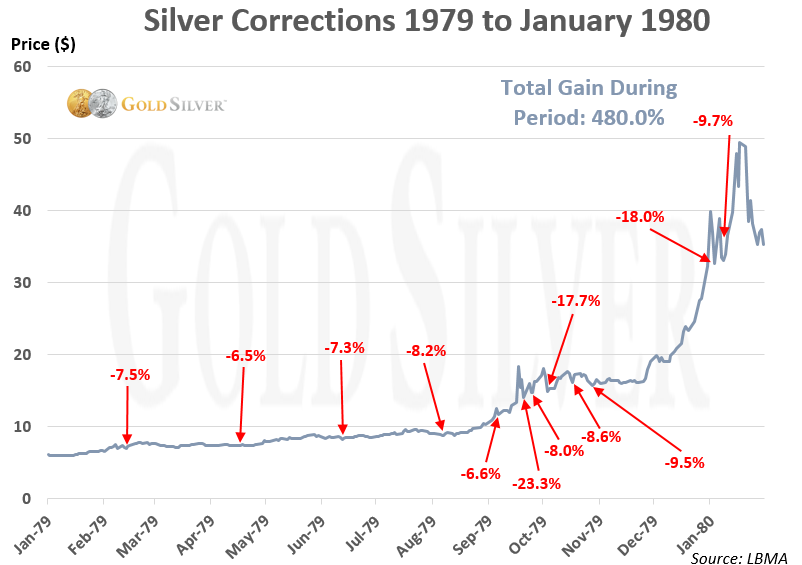 The silver price corrected 12 times before it reached its all-time high of $50. Three of those declines were double-digits. This much selling while the price was on its way to a 480% gain.

The message from gold and silver’s biggest one-year gain in modern history is this: corrections always occur, and sometimes they can be big. And in this bull market they were indeed buying opportunities.

After the 2008 meltdown in all assets, gold and silver began an earnest climb. From January 2009 to its high in September 2011, the gold price more than doubled.

And yet during this relentless march upward, there were 17 corrections of greater than 3%. 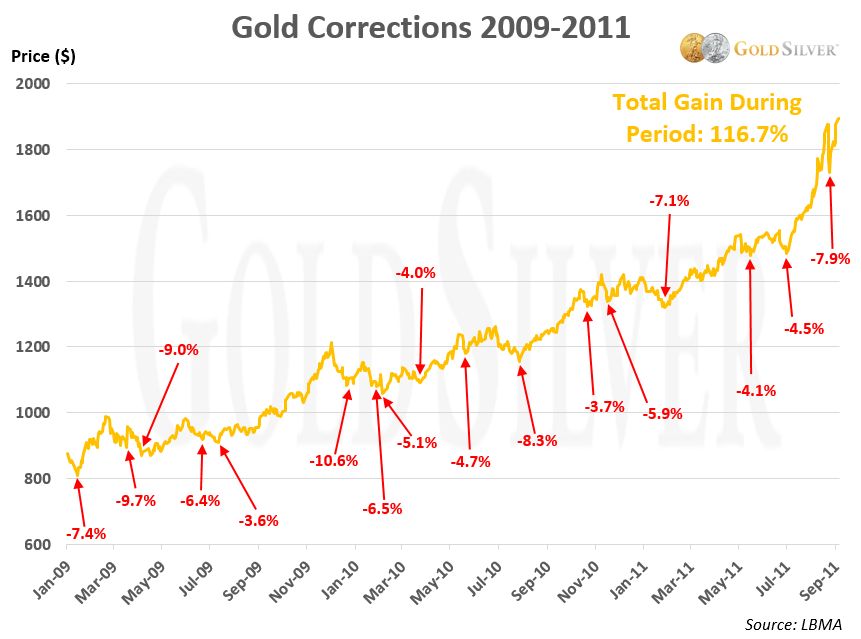 Corrections averaged one every two months during this period. Only one was over 10%, but the selloffs didn’t signal the end of the bull market; they were ultimately just a healthy breather.

Here are silver’s corrections of greater than 5%—check out all the red during this monster run-up. 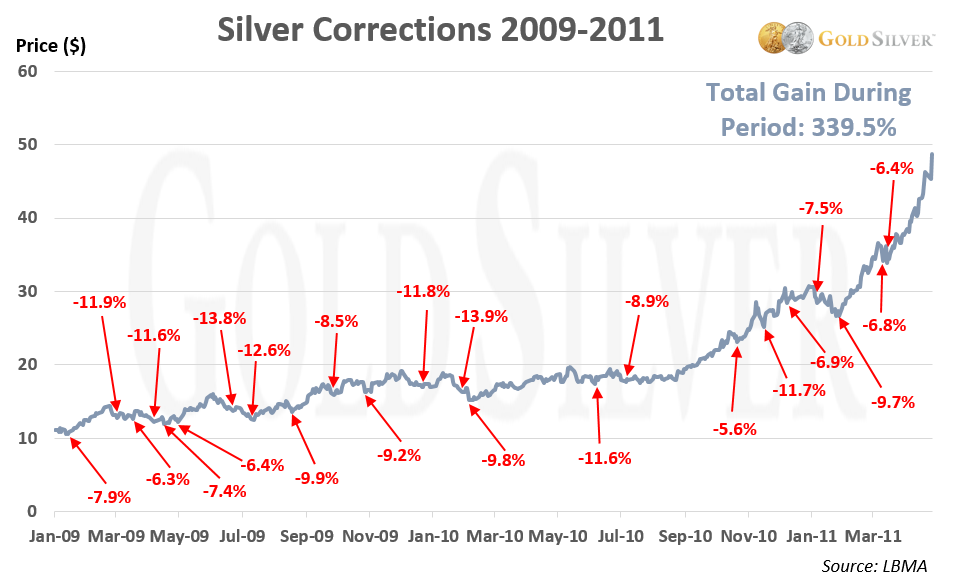 While silver was in the process of climbing nearly 340%, there were a whopping 23 selloffs of more than 5%. Eight were bigger than 10%.

The message here is similar to the one from the late 1970s: bull markets experience lots of corrections, and some of them are big. Huge run-ups don’t last forever, but if it’s a bull market you can’t let the bull shake you off.

With that historical context, now let’s look at our current market…

Gold has risen every year since 2016, but things really started heating up last year. From when we popped the champagne cork on New Year’s Ever 2018, gold has risen has much as 61.3% (through August 6).

And yes, there have been plenty of corrections. 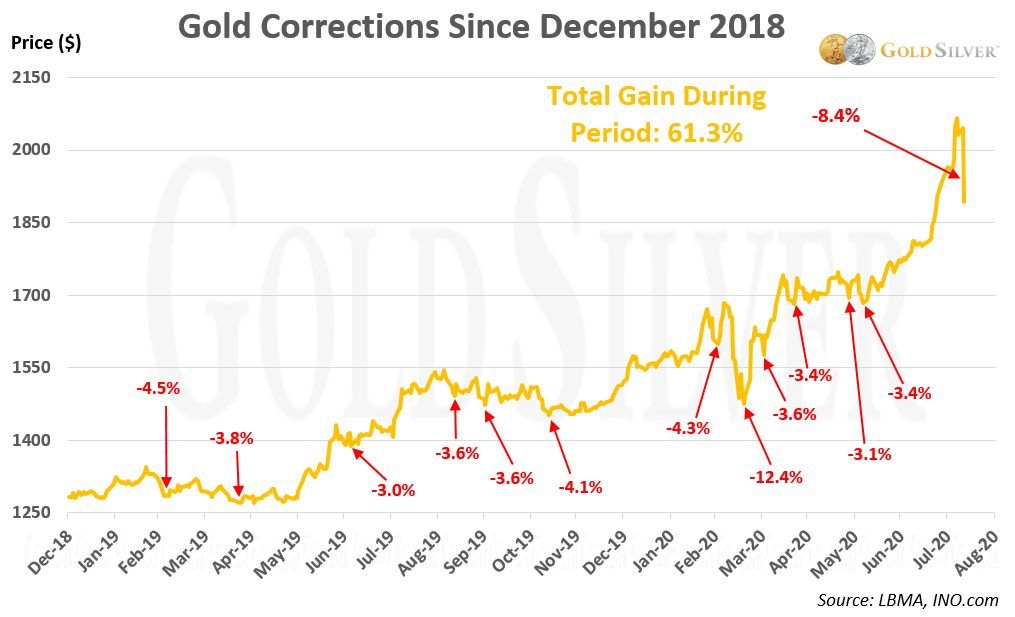 The gold price has seen 13 pullbacks of greater than 3%. The one last week that had some investors worried wasn’t even the biggest. And it wasn’t exactly surprising, since the price had risen 15 consecutive trading days, a rare feat. 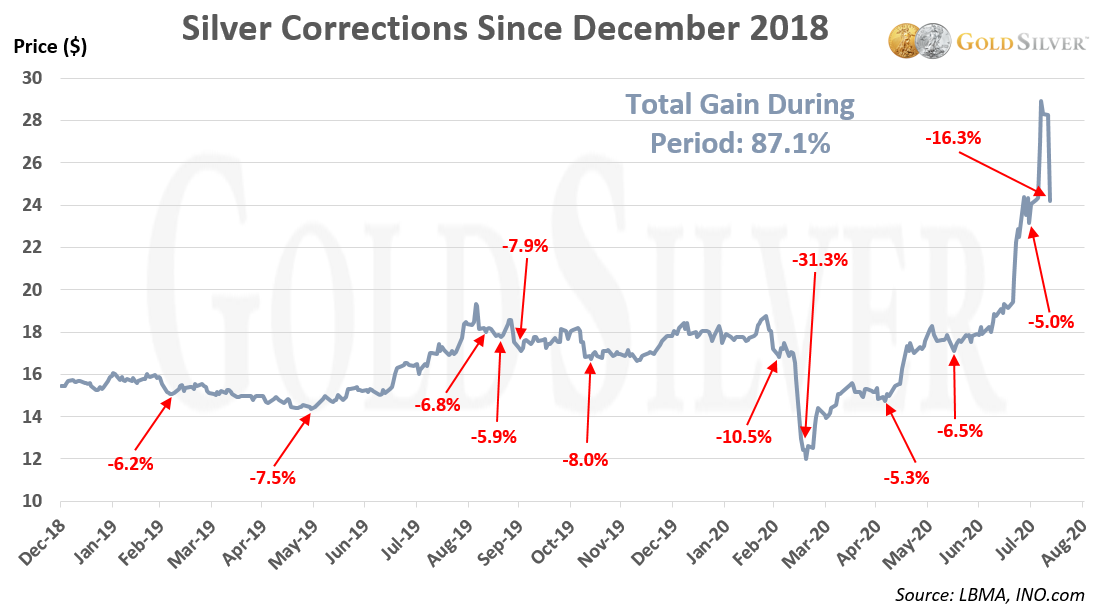 The price has had a dozen declines in the past 20 months. Like gold, the recent one was big, but not the biggest.

History shows that corrections are normal, even during huge run-ups in price. They’re actually a healthy market phenomenon. They shake off the weak investors, and give the market a chance to catch its breath.

And for those of us who see the same big picture as Mike, corrections are also buying opportunities. They’re an invitation, regardless of how you might feel about them.

We don’t know how deep a correction will be, but the point is to buy during the downdrafts, not when the price is running hot.

Unless one thinks the monetary, economic, market, fiscal and geopolitical risks have all been resolved, and that there is no longer any need to hold physical gold and silver, then shun any worry you might have at the next correction and accept the invitation.

Your future self will thank you.