We all know silver is a small market and therefore volatile. We also know it outperforms gold. And if you’ve participated in one of its spikes, you know the gains can be both quick and breathtaking.

But what some investors may not be aware of is that those spikes have historically not lasted long. The bull market may last a long time, but the big spikes are usually short-lived.

Silver can be a lot of fun when it goes vertical, but those vertical slingshots have typically not lasted long. I think this “DNA” aspect of silver is important for investors to be aware of.

Here are all of silver’s biggest spikes since 1970, as measured from when it first broke out to its peak. I also added how long each of those runs lasted. 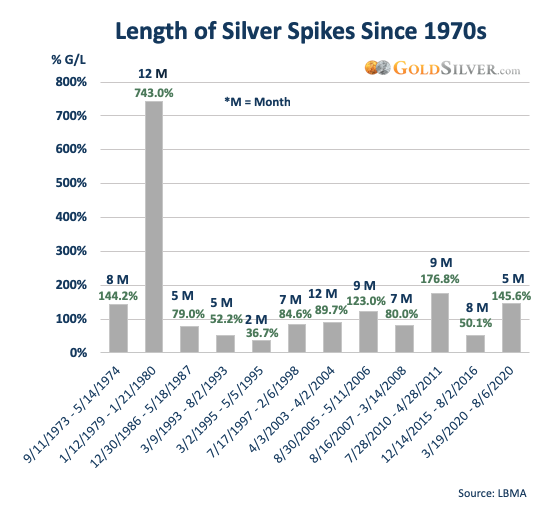 In almost every case silver’s big run-up can be measured in months. None last more than a year.

Again, this is not measuring bull markets, just the spikes. However, in many cases the silver price didn’t move all that much prior to the spike—and usually trailed gold—but when it took off, it rose like a rocket.

There’s another observation to be aware of. Silver’s volatility works both ways: in most cases the price deflated after it peaked, handing back much of those gains.

The pattern is almost predictable: ignite, spike, deflate. Many times in the middle of a bull market.

Pulling all this data together tells us investors three important things:

Perhaps the biggest message to investors is that one must buy before the spike kicks in. Once it erupts, you’ll be chasing a train that’s already rolling down the tracks. You’ll not only pay a higher price but a higher premium as well, since demand usually jumps when prices do.

Are there exceptions to this behavior?

If Mike is right, silver investors should prepare for the run of their lifetimes.

If interested, here’s the way I’ve been buying silver recently to keep costs down.