History Says Gold and Silver Could Bubble Off the Charts

Mike has made a strong case for gold and silver being the next big asset bubbles. What does history show about his claim?

I looked at the biggest bubbles from history, because I wanted to see if there was historical precedence for the gold price exploding into a big bubble. If it has, it could do so again. If it never did, on the other hand, the claim might be harder to prove.

Here are the biggest financial bubbles from the modern era. Notice which one was the biggest. 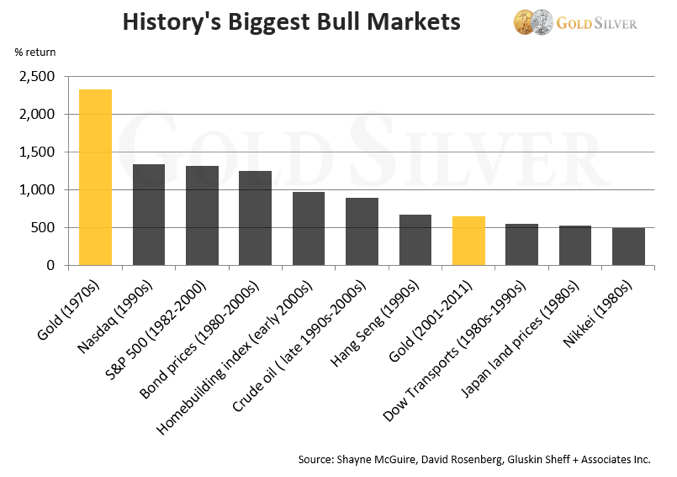 The tech bubble, real estate bubble, and even an 18-year run-up in the S&P came nowhere close to the gold mania of the 1970s.

Even today’s US stock market—which has basically tripled since its 2009 low—pales in comparison to the gold bubble of the late ‘70s.

It’s really true: there’s no rush like a gold rush.

There were some big bubbles from long ago, too…

South Sea Bubble, UK, 1711. Stocks in the South Sea Company traded for 1,000 British pounds at their peak. After they crashed, they were worth ZERO.

Florida Real Estate Craze, 1926. Land in Florida priced at $800,000 could one year later be sold for $4 million. Property prices quadrupled in less than a year. After the crash, all gains were erased, and real estate sold for what it did before the craze.

And actually, I did find one bubble bigger than gold’s…

Tulip Mania, Holland, 1634-1637. At the peak of the tulip mania, a single tulip could be exchanged for an entire estate. After the crash, however, the price of one tulip was the same as an onion!

And let’s not forget about silver, which also bubbled bigger than gold… it rose a whopping 3,105% by the end of the 1970s mania!

You history buffs may know of more investment bubbles. But there’s no denying that gold and silver have bubbled off the charts before.

And here’s something you may find interesting…

I’m NOT saying that will happen—and frankly, let’s hope it doesn’t, because it would imply we’d been living in a very ugly world. But clearly there is a lot of room to the upside for gold and silver.

The bottom line is that this historical data shows Mike could be right: the next great asset bubble could again be gold and silver.

The Implication for Buyers

As an investor, it’s tempting to focus on the price of gold and silver. Have you found yourself asking any of these questions?

Could I get it cheaper in a few days?

Will it fall to XX price on a chart?

What if I buy and then the price drops?

But if gold and silver are indeed the next big bubbles, these questions become almost irrelevant. How upset can you really get if gold rises, say, 900%, but your profit was only 890%?

If Mike is even half right about what’s coming, worrying over a few dollars for gold or a few cents for silver will be meaningless and long forgotten.

Instead, focus on how you and your family would be impacted in a crisis, and how you will financially deal with that crisis. Any reasonable assessment of global financial affairs points to the need to have a lot of bullion at this point in history.

Because if we get a big bubble in gold and silver, the world around us could be pretty nasty.

You could save a few dollars if your timing is perfect—but the next crisis will make you forget all about it.