How Much Silver You'll Need to Buy a Vacation Home

If all the research GoldSilver has done over the years proves correct, gold and silver owners will have some dinero to spend when we exit the sector.

How about a vacation home?

There will probably be lots of things you want to spend your proceeds on by the time the wealth transfer is complete. But perhaps the pinnacle of financial success would be to own a vacation home. Even better would be paying cash for it.

The formula for doing so is pretty straightforward:

1. Buy enough silver, outlined in the chart below,

4. Sell when the mania hits and pick out your getaway chateau.

Could it really be that simple?

It relies on two trends, but yes, if history repeats, it will be. Not only that, it’ll happen within a few years. Here’s how…

First, real estate. Home values have been rising relentlessly and are nearing the runaway peak of 10 years ago. 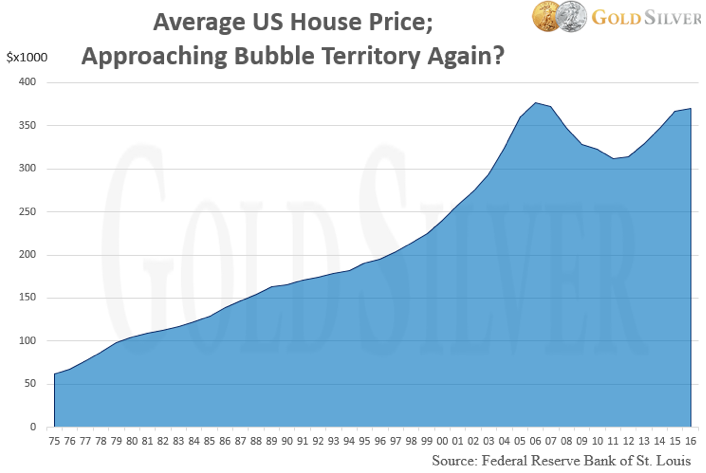 Since the beginning of 2012, the average home price has risen 18.5%. This pace is above historical averages—except during the mid-2000s bubble.

My home in California recently appraised just shy of its 2005 value. Some homes in the San Francisco bay area have been going for above asking price for a year. It seems clear that real estate values are getting a tad frothy again.

And don’t forget the eventuality of rising interest rates, which will make home-buying less affordable. This would lower demand, and as a result, prices. I think rates will likely stay low for a while yet, but no trend lasts forever. Even if the Fed doesn’t raise rates, the market could force them up when inflation kicks in. Real estate values may not rise in an inflationary period like most investors presume, if rates are marching higher.

Last, the timing could correspond with the market crash Mike has repeatedly warned about. It could be a nasty perfect storm for real estate.

Bottom line, home values are likely to be lower a few years from now, not higher.

The Next Great Bubble

By any account, gold and silver have entered another bull market. And bull markets in precious metals last for several years at a time.

As Mike has stated numerous times, sooner or later an accounting will be made for all the excess currency that’s been printed. Given that excess is at an unprecedented level in history—and still ongoing—gold and silver prices are likely to be the next great financial bubbles.

Silver’s upside could be tremendous this time around. It very well could be life-changing.

Here’s how many ounces of silver have been needed to buy a median-priced house in the US. Notice the amount when silver peaked in January, 1980. 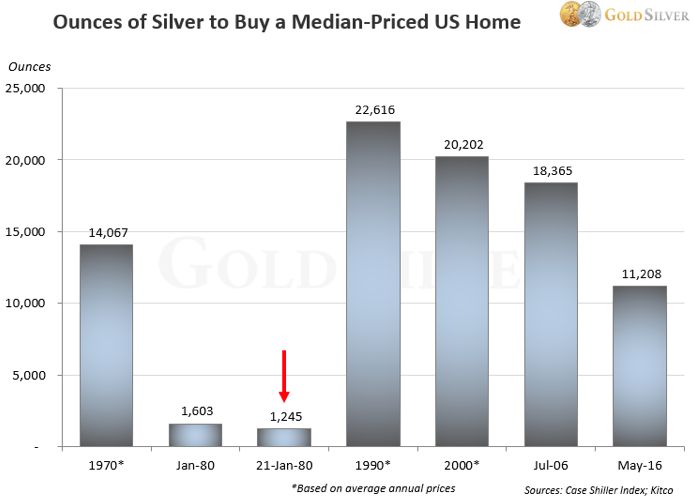 (The Case-Shiller Home Price Index was used for this chart, as it is adjusted for regional and seasonal pricing impacts and is thus more realistic. The FRED data used above is a raw snapshot of median prices.)

If you didn’t sell at the exact peak but managed to get silver's average price of $38.80 that month, 1,603 ounces of silver were needed to buy the average-priced home.

Compare these amounts to what was needed in 1990 and 2000. Even a modest income could find 1,245 ounces attainable—just keep accumulating.

And here’s something else you’ll find interesting, especially if you’re a real estate bull… the median-priced home in 1970 was $23,000. Real estate values soared that decade, and by January 1980 the average home sold for $62,200. Yet look what happened to the ratio… it still fell dramatically, even though home values had nearly tripled!

This means real estate doesn’t even have to decline for the ratio to return to its 1980 low. The next mania in silver prices could take care of it.

Also notice how the ratio has been falling since 1990. Even at the peak of the real estate bubble in July 2006, the ratio was falling because silver prices were rising much faster. Further proof that home prices don’t have to decline for the trend to work in our favor.

Add it all up and it is quite possible that you and I could buy a vacation home for as little as 1,245 ounces of silver at some point in the not-too-distant future. This is the perfect example of what a wealth transfer looks like.

Of course the fine print here is that you actually sell near silver’s peak, and that you pay the tax on the gain from another source. Do those two things, though, and the home is free and clear.