How Would Gold Perform In a Second Stock Market Crash?

In the biggest stock bear markets over the past nine decades, there was an initial crash… followed by a big bounce… and then a more severe selloff, a “second leg down” if you will.

Could it happen again?

As Mark Twain said, “history doesn’t repeat itself but it often rhymes.”

With trillions of stimulus flooding the market, I don’t know if we’re looking over the cliff at another crash in the stock market or not. Even Mike Maloney mentioned that stocks could just as easily melt up as they could melt down.

But if we do get another leg down, I wanted to know… what happens to gold in the “crash after the crash”?

I examined the four biggest bear markets in US stocks, ones that included a bounce and then a “second” leg down, and measured gold’s performance during each of those second selloffs. I had an idea of what I might find, but even I was surprised at the results. If you own gold I think you will be, too…

The stock market crash of 1929 kicked off the Great Depression. After that initial selloff, stocks bounced over 20%, but then proceeded to fall an incredible 84.5% over the next two years.

As most of you know the gold price was fixed during this time, and President Roosevelt nationalized it in 1933 anyway. But investors could own gold stocks as a proxy. Gold equities saw huge buy volumes during the Great Depression.

Here’s how the largest gold producer in the US at the time, Homestake Mining, performed during the Dow’s second leg down. 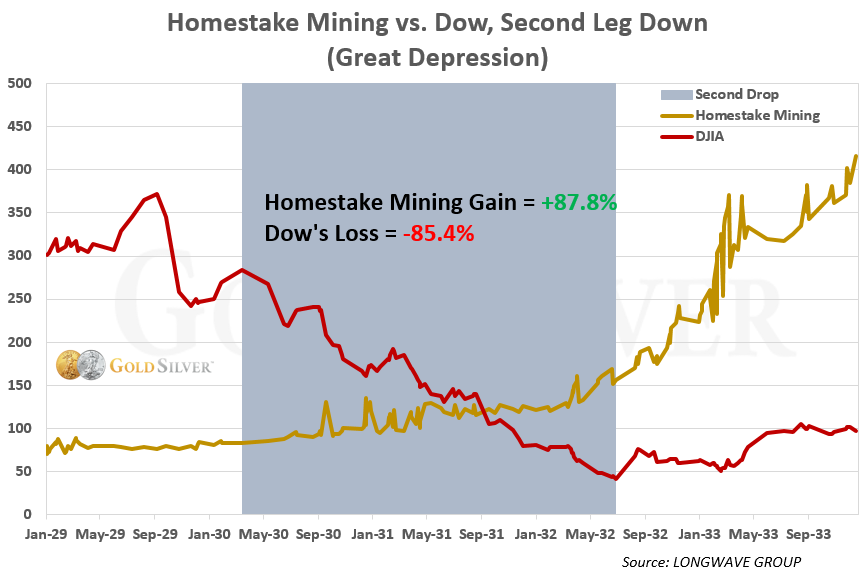 Homestake Mining—what some investors bought since they couldn’t own gold—ROSE 87.5% during this period. You can see it went on to rise much further, but from the beginning of the Dow’s second leg down to its eventual bottom, this proxy for gold ownership soared.

Here’s how gold did during that second leg down. 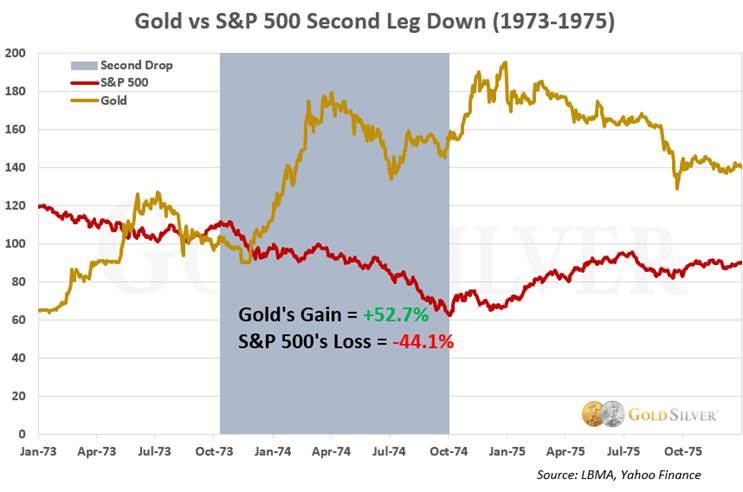 Gold ROSE 52.7% in that second leg down. It eventually eased off when stocks started to climb again, but during the dark days of the second crash, it once again soared.

Here’s how gold did during that second leg down. 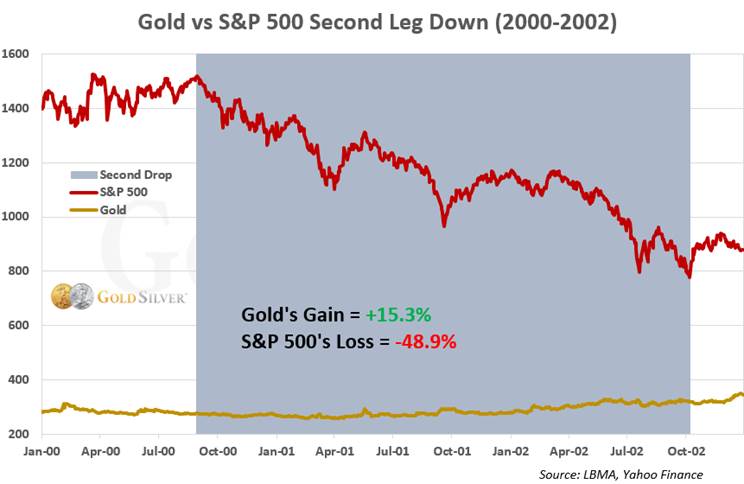 Keep in mind this was during the “tech wreck” when the Nasdaq fell 66%.

You could talk me into starting the “second” leg down later, and if so the S&P’s loss would’ve been lower, but the gain in gold would’ve been higher.

Either way, the message is the same: gold once again rose during the second leg down for the broad stock market.

We all remember the Great Financial Crisis that started in 2008. Stocks starting falling in late 2007, the S&P dropping 16% in five months. It bounced about 10%, then began a second leg down and fell 52.5% over the next 10 months.

Here’s how gold performed during that second ugly downdraft. 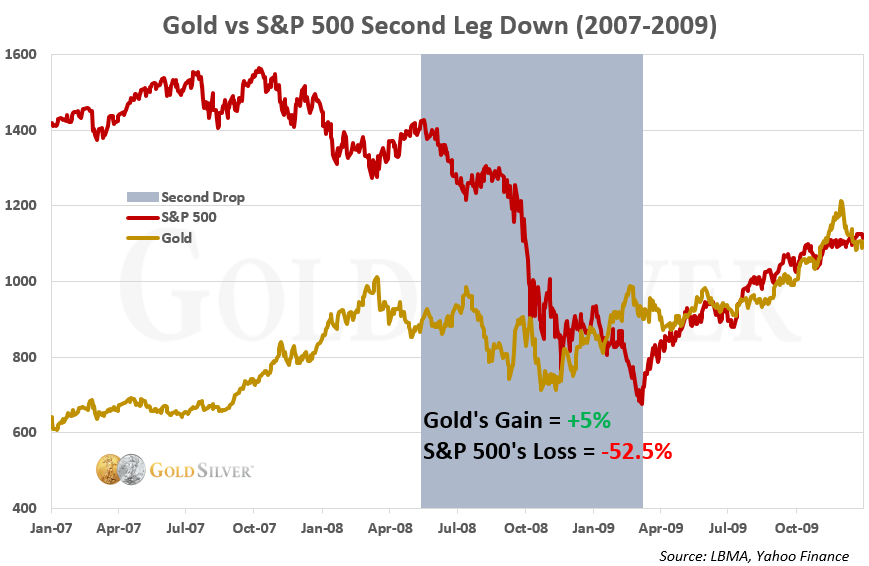 The gold price ROSE 5%. That’s not as much as the prior ones, but it logged a gain during the period when stocks lost over half their value.

So, what do we conclude from this?

Gold Has Risen in Major Second Down Legs

In the stock market’s four worst bear markets, ones that included a major second leg down, the gold price has risen every time. It may suffer in the initial crash that kick-starts a bear market, but in these worst cases the demand for gold—and the price—surged when stocks started a second leg down.

Is that what gold will do if stocks crash again today? History is on our side, but whatever is ahead it’s reassuring to know that gold doesn’t follow stocks, and instead does what it’s done for centuries: serve as a hedge, as a store of wealth, and as the strongest form of money mankind has ever had.

Why Fed Insider Zoltan Pozsar Is Bullish On Gold And More

It's Not Just the USA: The Economic Instability Is Global

Conditions Are Ripe for a Deep Bear Market: WSJ

What's Next for Russia's War in Ukraine?

A Reset that Serves the People

How The Fed Killed Mortgage Current Coupon Rate – MBS Index, Back To 1985 Levels