It was a fight!

My keynote presentation at the New Orleans Investment Conference pitted the Fed against gold, me playing both parts by using different caps when one or the other was talking. I wanted to do this because I’m continually flabbergasted by how much faith mainstream economists and investors put in what the Fed says, what I view as nothing much more than marketing.

So, I decided I would go through 5 major claims from the Fed, and then have gold refute each one of them—using the Fed’s own data. It was both fun and useful, and we’ll post the video once it’s available.

One of those claims is the Fed’s public statement that they’ll lower the CPI to 2% by “late 2023.” This is a joke on its face. Here’s the proof, right from the Fed’s own data…

The Ghost of Paul Volker

Fed Chair Jerome Powell said last month that they are “resolute” in bringing down inflation. They “have the tools” and “it’s been done before,” referring to the Paul Volker days when inflation was in runaway mode and he brought it down.

This chart shows the CPI (bars) and the Fed Funds Effective Rate (line) from the time Paul Volker was hired in 1979. Look how long it took for him and his team to get inflation below 5%. 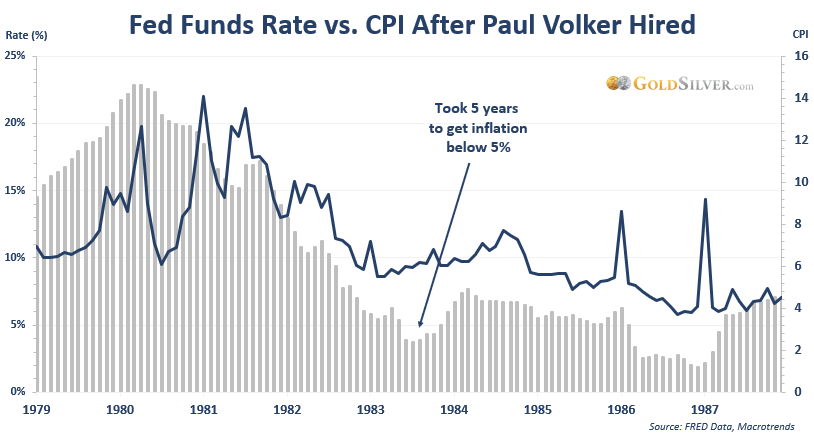 After Paul Volker was hired, the CPI continued to rise for over a year. In other words, the tools the Fed used at the time took a substantial amount of time to begin to work.

Further, it took the Fed almost 5 years to push inflation below 5%. Those counting on inflation to cool had a long wait.

And then look what happened… the CPI popped back up to 7% almost right away and didn’t fall below 5% again for another two years.

You might claim that inflation today is nowhere near the lofty levels of the 1980s. True—but it’s all relative. Reducing inflation from 22% to 5% is the rough equivalent of reducing it today from the 8% range to 2%. Both require the CPI to fall by over 70%.

The Fed proclaiming they’ll do it a year is poppycock. You can believe them if you want, but history shows it is quite different than the lofty proclamations they’re making. More likely is that it’ll take years. With the added bonus that it doesn’t stay down but pops back up again.

The consensus of most analysts is that the Fed will stop raising rates once they “break something.”

That could be any number of things:

Most analysts are focused on when the Fed might “pause.” But what many are not expecting is a full-blown pivot, where they begin to lower rates again. It could come quicker than most realize.

You want to guess how long it takes the Fed to lower rates after the last time they hike them? Most people are shocked when they see this data. 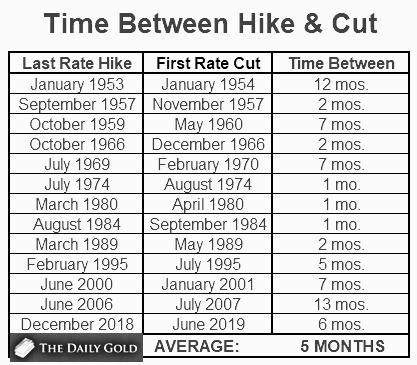 Looking at all rate hike cycles since the 1950s, the average time from the last rate hike to the first rate cut is a measly 5 months!

This is an abrupt reversal from a governing board that just 5 months earlier was raising rates. Not only does this question their acumen and foresight, but it also means we can reasonably expect the Fed to begin lowering rates not long after they pause.

I shy away from making predictions, but I would be surprised if we don’t see the first rate cut from the Fed by this time next year. I just don’t see them going that long without “breaking” something, with history showing they’re likely to cut rates within mere months afterward.

Either way, I’m calling the Fed’s bluff. They’ll pivot long before inflation is 2%. It could be years before we see the CPI that low again. Just ask Paul Volker.