Is Silver the Next Tesla?

It’s no secret that one of the Nasdaq’s best performing stocks this year has been Tesla. Its meteoric rise, until recently, flashed dollar signs in the dreams of its investors.

Given silver’s historical volatility, a question dawned on me: could silver log a similar runaway price advance in the not-too-distant future?

It’s a fair question. Not only can silver be highly volatile, but potentially life-changing catalysts are staring us in the face. So let’s have a little fun and see if silver could have a comparable parabolic run…

The Core Reason for Silver’s Volatility

Long-time silver investors already know this, but the primary reason the silver price is so volatile is because it’s a teeny tiny market. It takes less cash coming in to impact its price than it does other assets, including gold.

And when we look at just the investment market for silver, it’s even smaller. 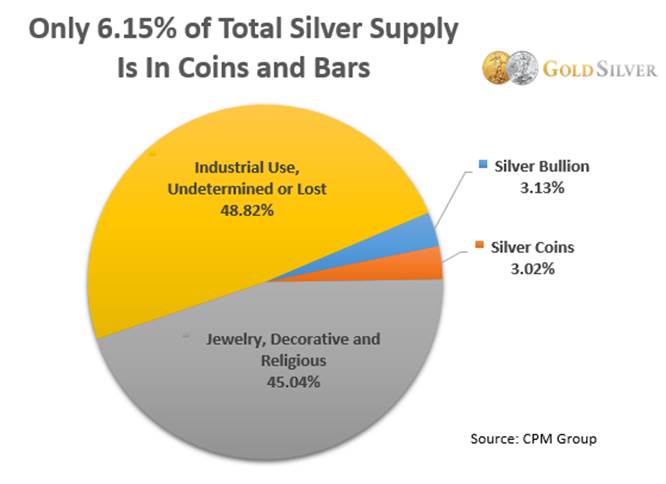 While the amount of silver that is refined into coins and bars fluctuates every year, only 6.15% of total above-ground holdings are estimated to be in investment form.

Last year 36.2 million ounces of silver went to coins and bars, below its long-term average, and the price rose a modest 15%. Investment demand has changed in a big way this year, and the spike sent silver on a relentless surge, rising 145% from its March low to August high.

And yet, Tesla stock has trounced silver this year. Here’s how it’s performed year-to-date, vs. silver. 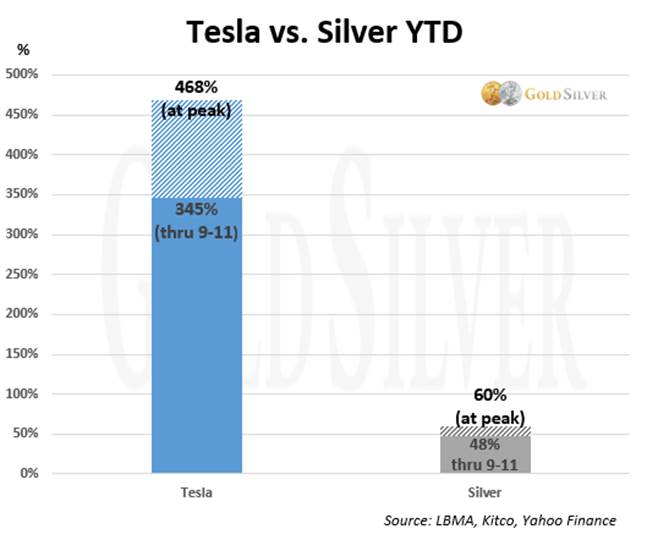 Tesla stock rose as much as 468% at its peak last month, vs. silver’s advance of 60%. Both have since pulled back, but despite silver’s strong performance this year, Tesla has gained almost eight times more in price.

That’s reflected in the growth of their market capitalizations, too… using the figure of 3.512 billion ounces of above-ground investment silver (CPM Group’s estimate), you can see how silver’s “market cap” has grown this year as the price has risen (right bars). But Tesla’s market cap has exploded (left bars). 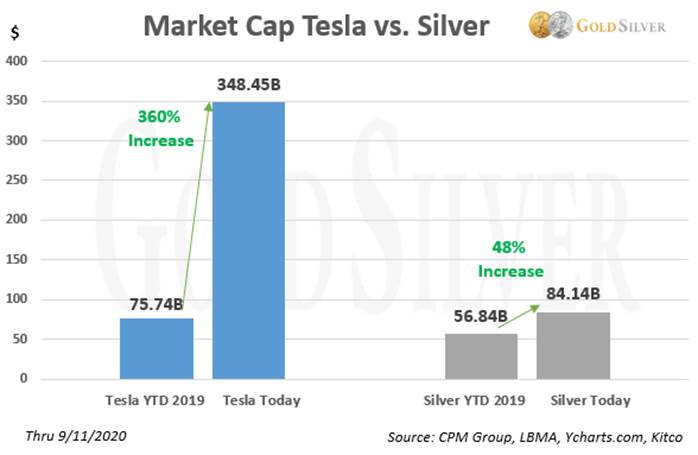 Even with the recent big pullback in its share price, Tesla’s market cap is 360% higher now than when the year began. That’s a huge jump for an individual stock in less than nine months.

And let’s not forget that this is ONE company… all above-ground investment silver (at $26) is currently one-quarter the value of Tesla.

This again highlights just how small this market is, and why it can be so volatile.

With that context, let’s get to the big question…

Is Silver the Next Tesla?

How can I state that so confidently? For starters, because it’s already matched Tesla’s performance in the past. And exceeded it. 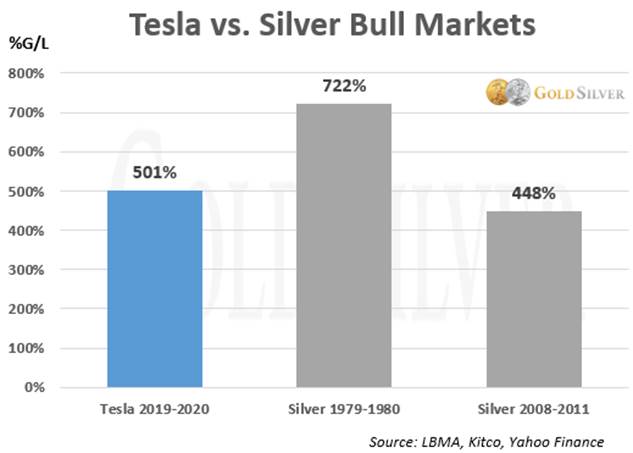 Silver’s run from its 2008 low to 2011 high comes close to Tesla’s performance over the past year. But silver’s parabolic move from January 1970 to its peak in January 1980 exceeded Tesla’s run by 221 percentage points.

Yes, the tiny silver market, largely ignored by Wall Street, provided investors a greater return in 1979-1980 than Tesla has this year.

Will silver see another run that rivals Tesla’s performance? Or even exceed it?

And while I don’t like to count my eggs before they hatch, Mike lays out a case for how silver could even reach as much as $700.

There are certainly no guarantees, and everyone has to make their own investment decisions, but I can tell you that Mike and I are investing heavily in silver because we believe it will be a direct beneficiary of the monetary fallout that at this point is inescapable. And if that fallout includes inflation, look out above.

So my answer is yes, silver will be the next Tesla.