Jeff Clark: Which Luxury Items Priced in Silver Will Get Cheaper in 2023?

Something fun to think about as you break for the holidays…

Ever thought about what you might buy with your proceeds from silver?

It’s too early to do that now, and we’ll have to briefly swap for currency to do it, but if we’re right about where the silver price is headed—and simultaneously where the economy and markets are headed—many big-ticket items in life will get cheaper IF we use the proceeds from our silver to buy them.

The following charts are things you someday might want to buy, priced in silver. The metal is undervalued in all of them, some more than others, but which do you think improves the most in 2023, and in the next few years? Meaning, which items will become more affordable if bought with silver?

Here are the candidates…

The average price of a new car in the US has steadily risen over time. And it’s spiked the past couple of years.

Kelley Blue Book data from December 12 says the average price of a new car is now $48,681 and a new record high.

Here’s how many ounces of silver it takes to buy a new car, from 1980 to last week. 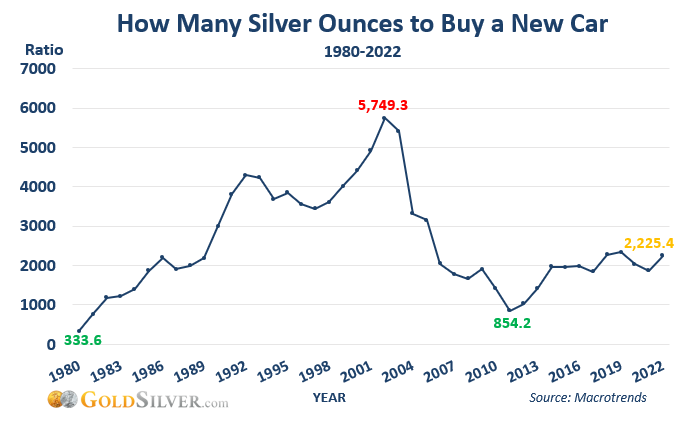 This ratio is based on an index from the Fed, so does not represent powerboat prices per se, though of course is tied directly to prices.

At 14.4, even with persistent high inflation, that ratio is likely to fall a lot in the next silver run.

Give me a good Caymus Napa Cabernet and I’m happy on a Saturday night. This data from the Fed of the average price of a bottle of wine sold in the US shows it only took 2.7 ounces of silver to buy in 2011.

It’s currently 7.3. My modest wine cellar thinks it will take fewer ounces of silver to buy my favorite bottle in the near future, even if wine prices rise.

This data is from Ronni Stoeferle of Incrementum AG and shows how many ounces of silver—priced in euros—it takes to buy the average priced beer.

It takes a half ounce now, but in 2011 it only took a third of an ounce. I’ll let you determine if a future Oktoberfest will be cheaper—for those that use silver.

Need a vacation with your sweetie? It just might get cheaper for those that fund it with the proceeds from selling some silver…

This index from the Fed reflects the average night’s cost at a resort in the US. It’s not the price itself but is tied to prices.

The ratio was only 4.4 ounces of silver in 2011. It currently takes almost 12, so start saving in silver now so you can buy more hot summer nights with your honey.

And to get to that resort, you might need to fly…

The average plane ticket in America last month cost $280.49. It was the equivalent of 14 ounces of silver—but it took less than half of that in 2011.

We don’t have data going back to 1980, but given silver’s record-setting run then, it almost certainly took less than 6 ounces to buy a plane ticket at the time.

And here’s my favorite: buying a beachfront condo!

This index from the Fed is tied to the average purchase price of a beachfront condo in West Palm Beach/Boca Raton, Florida.

It’s hard to believe, but if the 1980 ratio were to repeat, a beachfront condo in an upscale Florida community would fall by 17 TIMES! Even if it doesn’t go that low, the next spike in silver will make it a whole lot more affordable.

So, what do you think—which ratio falls the most in 2023?

Perhaps a better question is, how low do each of these ratios get when silver ignites on the next spike?

Yes, we’ll have to pay taxes on the proceeds, but we can do that by owning a few more ounces or covering it from another source. Either way, silver will get us a whole lot more than deteriorating fiat dollars.

Which do I think falls the most? It might be a cop-out to say, “all of them,” but the silver price is so darn spiky that all these ratios will change abruptly—and drop precipitously—when the price ignites on its next run.

It could indeed be very fun for those of us that are saving in silver.

Are you preparing for it? I know I am.