Platinum vs. Palladium: Should You Invest?

When people think about investing in precious metals, they typically think gold and silver, but there are other elements in this group that may also deserve your consideration. Platinum and palladium are two in particular which have gained popularity as an investment option for precious metals enthusiasts. Both are classified as precious white metals due to their rarity in the earth’s crust. These white metals also have a striking appearance, are highly durable, and have strong industrial uses.

In our introduction to platinum and palladium, we give you the rundown on all the basics, including:

Platinum has been documented as far back as the 16th century when Spanish conquistadors stumbled upon mines of platinum in South and Central America. Platinum derives its name from the Spanish word platina, which roughly translates to “little silver.” Originally considered a nuisance in the search for gold, it was later discovered that this new white metal was actually even rarer than the gold for which they were searching. Platinum is corrosion-resistant, extremely durable and appealing from an aesthetic standpoint.

The most common use for platinum is in the automotive industry, where it is used in catalytic converters for primarily diesel engines. It is also used in oxygen sensors and other electronic devices which require a hard, corrosion-resistant conductor. Platinum is also commonly used in jewelry. It is used in the field of dentistry, as well, where it’s density and durability are ideal for tooth repair. In recent years, platinum has become increasingly popular as a bullion product for investment, garnering demand for platinum bars and rounds.

3. How Much Does Platinum Cost?

Platinum is currently one of the rarest metals on the planet, although there is speculation that it may exist in more abundance on the moon and other planets in our solar system. Per unit of mass, platinum far exceeds the price you’ll pay for silver. But in the comparison of gold vs. platinum, has not yet surpassed gold as the most valued metal in the marketplace, despite being rarer. While the price of platinum at any given time is more unstable than gold or silver, it has still increased roughly 5-fold over the last half-century 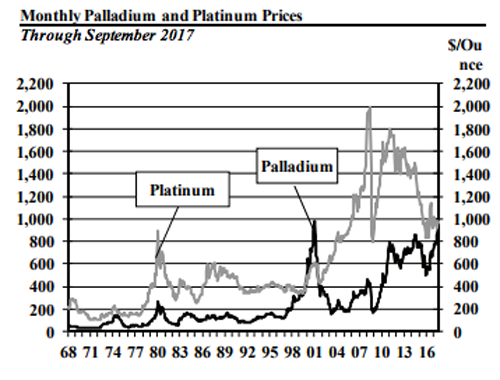 Palladium was discovered in the early 1800s. Its name is derived from the asteroid Pallas. Similarly white like platinum, perhaps a shade darker, it shares many of the same properties. It is hard, durable and resistant to corrosion. Although the exact quantity of palladium on the planet is unknown, we do know that it’s more abundant than platinum and gold.

Somewhat of a poor man’s platinum, palladium is similarly used in the automotive industry in catalytic converters, in this case primarily for gasoline engines. It is also used as a corrosive-resistant conductor for electronics. Additionally, along with several other metals, it is commonly mixed with gold to create what is referred to in the jewelry industry as “white gold.

6. How Much Does Palladium Cost?

Palladium is usually cheaper than platinum and gold, but still far more expensive than silver or copper. As you can see in the chart below, the price ratio of a palladium vs. platinum has varied wildly. 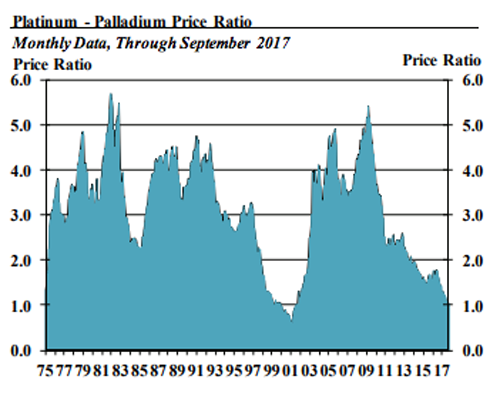 7. What’s the Difference Between Platinum and Palladium?

Nearly identical to the untrained eye, platinum and palladium are like peas in a pod. They have similar make-ups, meaning they react in similar ways to other elements — in fact, they are often interchangeable in industry. The primary differences are that platinum is far denser, less naturally abundant and usually more costly. Palladium is more common in industrial uses due to its similarity to platinum at a normally lower price point. Both platinum and palladium are common in the jewelry industry due to the appealing white aesthetic. Both metals are hypoallergenic, meaning their non-porous surfaces are unlikely to collect bacteria or react poorly with human skin, making them ideal for wedding rings and other jewelry.

Both precious metals are in available in many of the same forms as gold and silver, including coins, rounds, bars and jewelry. However, there is currently a very small supply of each, especially platinum. This means that, especially when comparing gold vs. platinum and silver vs. platinum, the price of these white metals is far more volatile. This makes them very unappealing to casual investors, as one has to rely on them holding their value through the ups and downs.

Investing in platinum and palladium can be a great way to diversify your investment portfolio. They are both tangible, finite substances that should hold their value well over time. Notably, platinum and palladium were not confiscated during the nationalization of gold and silver by President Franklin D. Roosevelt, and there appears to be little risk of this happening in the future. However, we believe that, for most investors, gold and silver still offer a better opportunity for investment. If you are looking to make a palladium and/or platinum investment, send us a note. We love to hear from our investors, and if there are specific products you’d like to see in our catalog, we’re open to increasing our offerings.