Should Gold Investors Root for Deflation?

One of gold’s biggest catalysts throughout history has been inflation. Debase your currency enough and gold responds almost automatically. And the bigger the inflation, the bigger gold’s response. Even the fear of inflation ignites the gold price, like we saw from 2009 to 2011.

The natural belief among many investors, then, is that deflation is bad for gold. And we’ve fielded more than one question asking why one should buy gold now if we’re about to get a big deflation like Mike Maloney says is coming.

But is deflation ipso facto bad for gold? You might be surprised at how gold has performed during the two biggest deflations of the past 100 years, along with a surprising three-fer you probably haven’t thought of…

The Gold Price Was Fixed During the Great Depression, But…

As you know, the US was on a gold standard during the Great Depression, and the price fixed at $20.67/ounce. However, after Roosevelt nationalized gold in April 1933, he raised the price to $35 just nine months later.

US citizens couldn’t own gold then, but they could own gold stocks. Miners had a guaranteed selling price (since the price was government-fixed), which benefitted them because their operating costs were falling. So how did gold equities perform during the Great Depression?

Check out the total performance of the two largest gold stocks vs. the Dow during the span of the greatest deflation the US has ever seen. 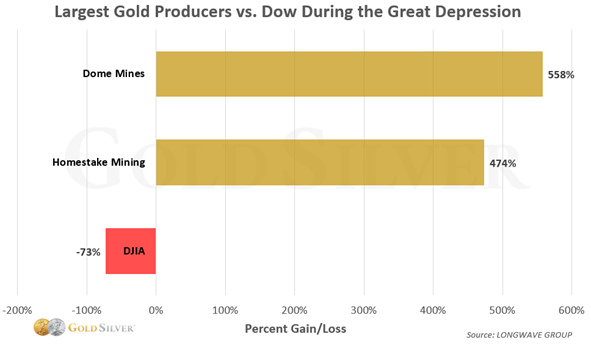 And get this: you could have bought both of these stocks at half their 1929 price five years earlier, which would have led to gains of around 1,000%.

That's not all: both companies raised their dividends during the Great Depression; Homestake's dividend went from $7 to $15 per share, and Dome's from $1 to $1.80.

If we pull back and look at the bigger picture, Homestake outperformed common stocks for an incredible 15 years. 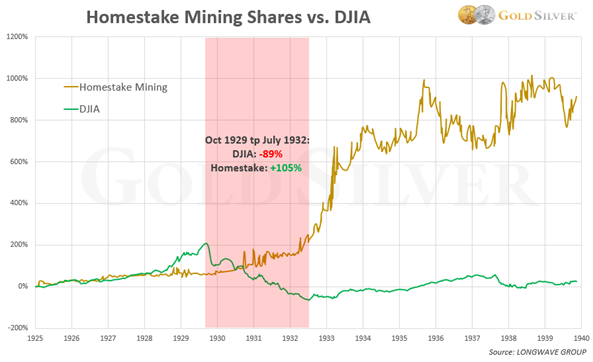 From 1925 to 1940, Homestake shares rose 10-fold, while the Dow basically went nowhere. And check out the highlighted pink section… during the worst part of the Dow’s crash, where stocks lost 89% of their value, this gold stock more than doubled in price!

We don't know exactly what an untethered gold price would have done during the depression, but given the performance of gold stocks – the only way US citizens could own gold at the time – it is entirely possible it would do well in a serious deflation.

The financial crisis 10 years ago was the scariest period of deflation in modern times.

You’ll recall that the worst of the stock market crash occurred in October 2008. Gold dropped hard then too, largely because investors needed liquidity. It wasn’t that gold was no longer a safe haven; it’s that for a short period of time the need for cash (to cover margin calls, etc.) skyrocketed, and gold holdings were available.

But you’ll also recall that in spite of the massive selloff that month, gold ended the year 5.5% higher. And by the end of 2009, it was up another 24%. This while stock markets continued to flounder and unemployment soared. Virtually no other investment class logged gains in response to the financial crisis.

The Great Recession lasted from the fourth quarter of 2007 through the second quarter of 2009. This was the second-worst deflation in America’s history – so the gold price fell, right? 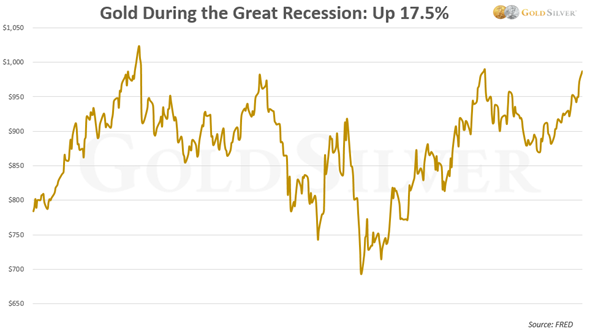 Gold, while volatile at times, ROSE during this debilitating and scary period of deflation.

Gold’s response was less about deflation and more about the extreme nature of the events happening at the time. It was the crisis that pushed investors into gold, despite an official period of deflation.

During a period of extreme crisis, even one that is deflationary in nature, gold is sought as a refuge. This has been borne out repeatedly throughout history.

In a true deflation – a full-blown depression where everything falls dramatically in price – everyday products would be significantly cheaper.

Gold would probably fall, at least initially, if the markets crashed overnight like in October 2008. Let’s say the price repeats that percentage decline and drops by one-third… from $1,300 that would take the price to $866.

A drop of this magnitude would be bad news for gold investors, right?

In this scenario, the purchasing power of your gold would actually be greater than it is today, despite the drop in gold’s nominal price. You could purchase more boxes of Cheerios than you can now.

So even if the gold price falls, it’s entirely possible that we would have more purchasing power if deflation makes consumer prices a lot cheaper.

Here’s the second kicker: you’d get a tax deduction for selling your bullion at a loss! That amounts to an additional gain to your bottom line.

And there’s a third benefit: if you’re using GoldSilver’s allocated gold storage program, your bill would decrease, since it’s based on metal value.

Gold Is Not Just About Inflation or Deflation, but Crisis

In a true deflation, all prices fall dramatically, and often gold’s, too, in the beginning stages. But if banks need to get bailed out again… or stock markets crash… or we enter another recession… or geopolitical conflicts escalate… or interest rates go negative in the US… or the proponents of MMT get their way… or [insert other reasons here], many investors would see gold as the safe haven it is. In other words, the fallout from deflationary events could serve as the very catalysts that push people to buy gold.

And as Mike has shown in Hidden Secrets of Money Episode 7, if we descend into a deflationary morass, it is a near certainty that global central banks will respond with inflationary actions. Remember, with central bankers and politicians, inflation will always get another turn – until their favorite tool turns on them and we get hyperinflation, the most bullish scenario of all for gold.

History shows gold has not fallen but indeed risen during the two worst periods of deflation in the US over the past 100 years. And there are potential advantages to holding gold through a deflation.

But whether you think we’ll get deflation or inflation or stagflation or something different, if it involves any type of crisis, gold is likely to respond directly to that crisis and not necessarily whether the CPI is going up or down.

We may not root for deflation, but holding a meaningful amount of physical gold is not just the best defensive weapon for our portfolio, it may also be the most profitable.

The Entire Global Economy is Breaking Up on the Rocks

Credit Suisse Has No Time to Lose: WSJ

Throwing Money at the IRS Won’t Fix Its Problems

Big Tech Stocks Plunge with Spooky Parallels to Dotcom Bust: -25% to -66% from Highs...