When updating our seasonal charts for gold and silver, I thought I’d take it one step further and document the actual high and low for each metal during the year.

The advantage to us investors—if there was a pattern—is that it could provide some additional insight into when to buy, and perhaps improve our overall expectations about price behavior.

But what I found may not be what you’d expect. See what you think…

This table documents the date of each year’s low for the gold and silver price since 2001. The green boxes signify the low occurred in the first quarter of the year (January to March), and I tallied them at the bottom. 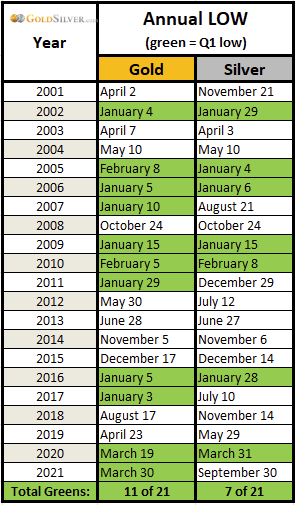 Gold logged its low in the first quarter of the year in 11 of the past 21 years, in other words just over half of the time.

Expanding out further, the low was hit in the 1st half of the year in all years except four.

You’ll notice this pattern is not really present for silver. It logged its annual low in the first quarter only a third of the time. Further, the low occurred in the last half of the year almost half the time—in 10 of the 21 years.

What this tells us is gold is more likely to adhere to seasonal patterns, while silver tends to march to its own beat.

The implications of this for buying silver is that snagging the cheapest price is less about seasonal patterns and more about accumulating during weak periods or big selloffs, whenever they may occur.

Here’s the dates of the annual highs for both gold and silver. In this case the green boxes represent highs that occurred near the end of the year, from September to December. 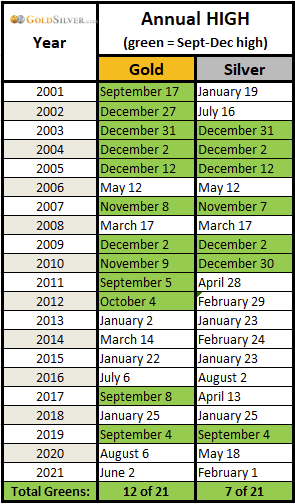 Seasonal for Gold, Nimble for Silver

Combined with seasonal averages, we will generally find better prices for gold in the beginning of the year than the end.

But that pattern is largely absent for silver. This suggests investors need to pounce when prices are weak or during a big selloff—that, instead of seasonality, is likely to provide us the lowest cost basis.

Of course you can throw these considerations out the window when episode 7 of Hidden Secrets of Money kicks in… in this video Mike shows the moves the Federal Reserve could attempt to prevent disaster, but how they will all fail… he takes us on a trip back to the 1920s and the remarkable parallels to today and what life could be like in the years ahead… and he invites Jim Rickards and Rick Rule to weigh in on the bond markets, currency creation, and of course precious metals.

Bottom line, make sure you have all the gold and silver bullion you want before the USA’s day of reckoning.