Silver in Charts: Supply/Demand Crunch After Years of the Opposite

The data is in: based on a review of reports from multiple consultancies, the silver market has officially entered a supply/demand imbalance. The structure now in place sets up a scenario where a genuine crunch could occur.

The silver price has been stuck in a trading range for five years now. But behind the scenes, an imbalance has been forming that could potentially lead to price spikes based solely on the inability of supply to meet demand.

That statement isn’t based on some far-out projection or end-of-world scenario. It comes solely from the latest supply and demand data. As you’ll see, it demonstrates just how precarious the state of the silver market is. And as a result, how easily the price could ignite.

Here’s a pictorial that summarizes the current state of supply and demand for the silver market. See what conclusion you draw…

Silver Supply: It’s Fallen and It Can’t Get Up

Annual supply is in a major decline. And the downtrend is getting worse.

Check out how the amount of new metal coming to market has rolled over and continues to fall. 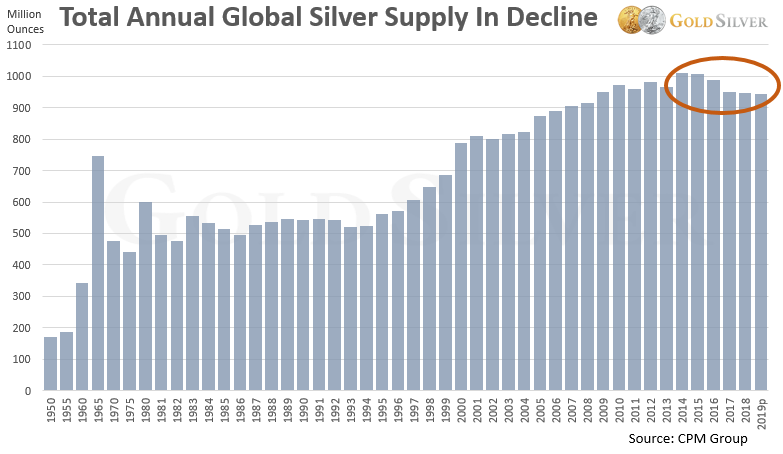 New supply for silver has now dropped for four consecutive years, and is widely projected to fall this year as well. Supply didn’t even fall during the “nuclear ‘90s”, the period where miners couldn’t turn a profit due to stagnant silver prices. But it is now.

Why is supply falling? It starts with miners. And they are now digging up less and less metal each year. 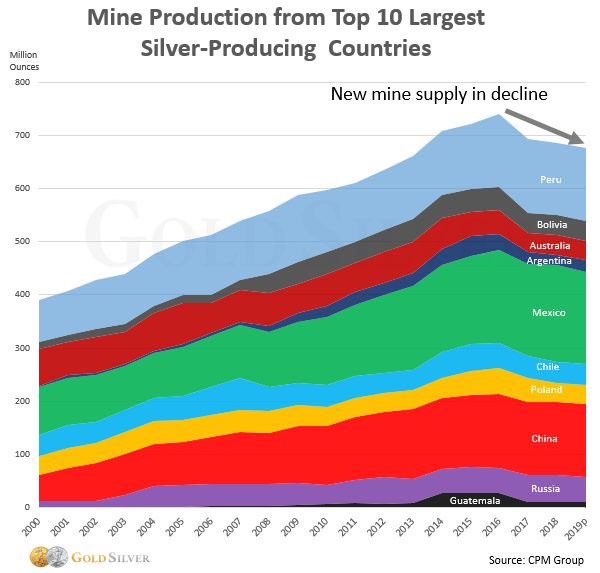 Note that every single country of the top 10 producers is mining less silver.

This trend will worsen. Because of the low silver price, many miners can’t operate at a profit. Most are waiting until silver prices see a sustained price rise before committing more capital to increased production; a quick price spike won’t be enough. Then they’ll need time — in many cases years — to bring new supply to the market. In other words, new supply won’t suddenly increase once silver prices move higher.

It’s actually worse than this…

Silver mine “capacity” — the amount of production expected to come online from new mines — has fallen off a cliff. It’s down almost 90% just since 2013. This is a direct result of the low silver price, and tells us how much new metal will be dug up this year: less.

Unfortunately, the problem is not just mine supply. 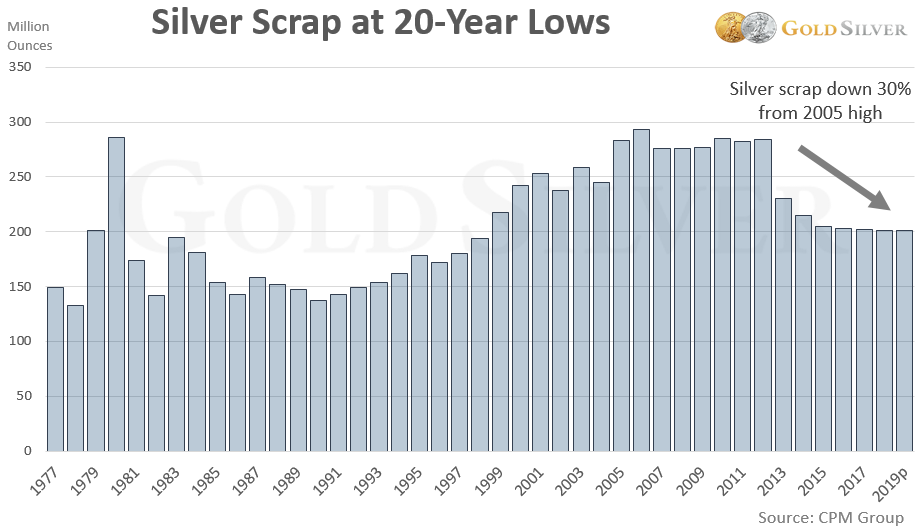 You can see that supply from scrap sources is now at a 20-year low, down nearly 30% just from 2006. Again, low prices are to blame. Scrap dealers can’t make much money at current prices.

So when demand increases, where will new metal come from? Not from government stockpiles… 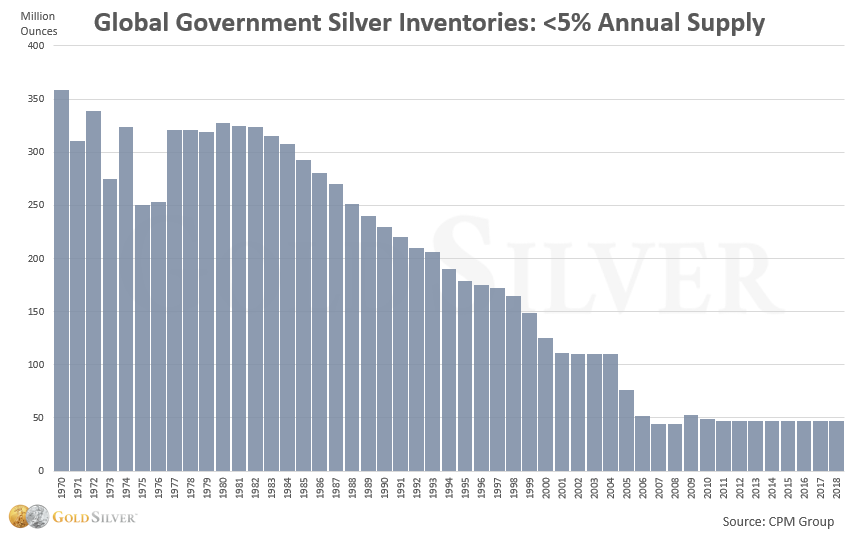 Governments don’t stockpile silver anymore. No nation uses it in their currency, so they stopped hoarding it. Once the next spike in demand comes, users are on their own. The government has no backup plan.

While supply is falling and locked in a downward spiral, demand continues to make records, something the mainstream doesn’t seem to be aware of.

First, here’s the picture of total silver demand around the world. 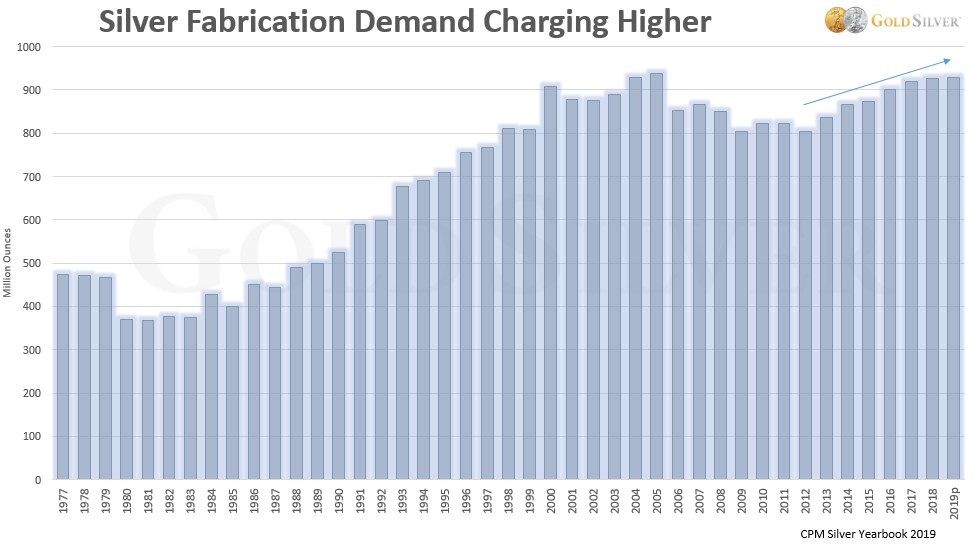 Total fabrication demand for silver has risen six consecutive years, and is widely expected to rise for a seventh year.

Much of this demand comes from the ever-growing industrial uses of silver’s valuable chemical properties. 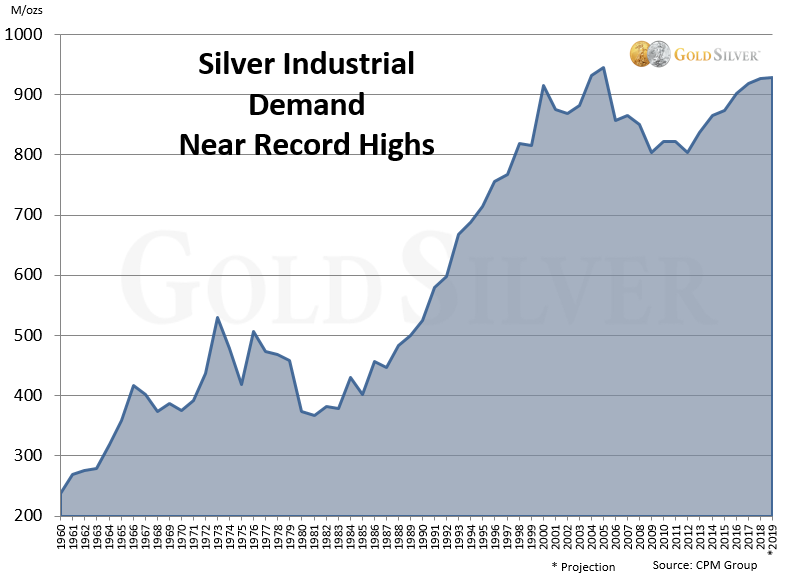 Industrial demand is near all-time record levels. And headed higher this year.

You’ve probably read articles about “weak” demand for physical metal. That’s true, but the rest of the world hasn’t let go of their investment in silver. 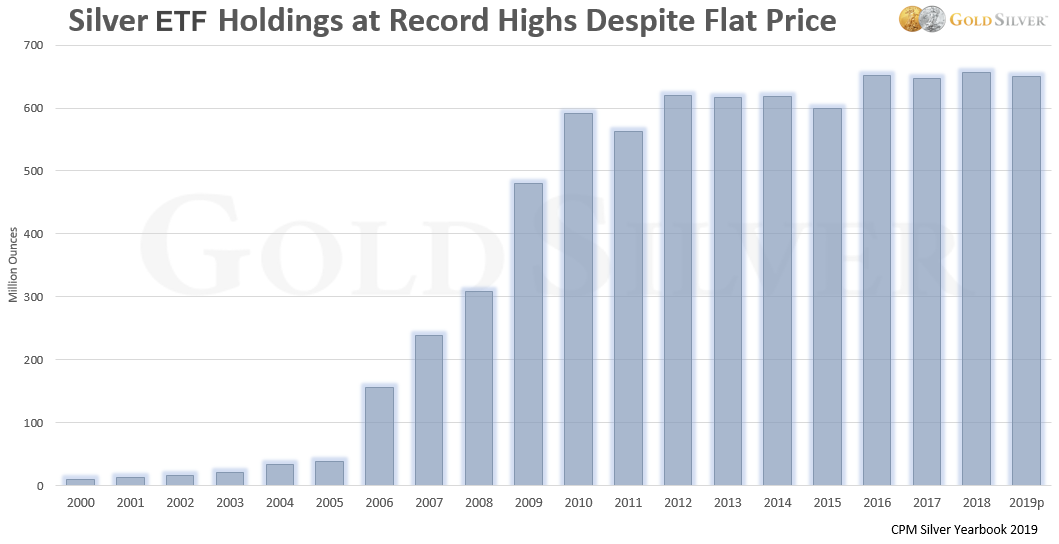 Demand for all silver exchange-traded products hit an all-time high last year. You and I don’t buy these products, but the mainstream does — and they obviously see no need to lighten up their positions.

Demand for silver is bursting everywhere. Look at solar use. 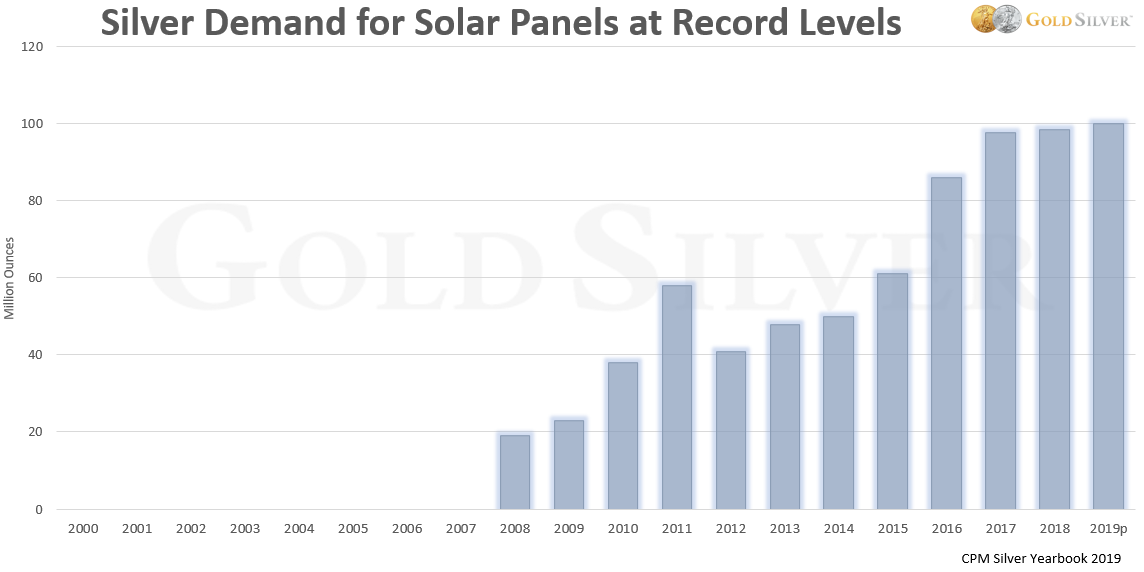 Silver demand for use in solar panels has risen 6 consecutive years, and is expected to be higher again this year. It was zero 12 years ago.

Keep in mind that the amount of silver going toward “green” technologies is growing exponentially. If you want to “go green,” you are, by default, going silver. This is a trend that is picking up steam internationally, and will be in place for the foreseeable future. 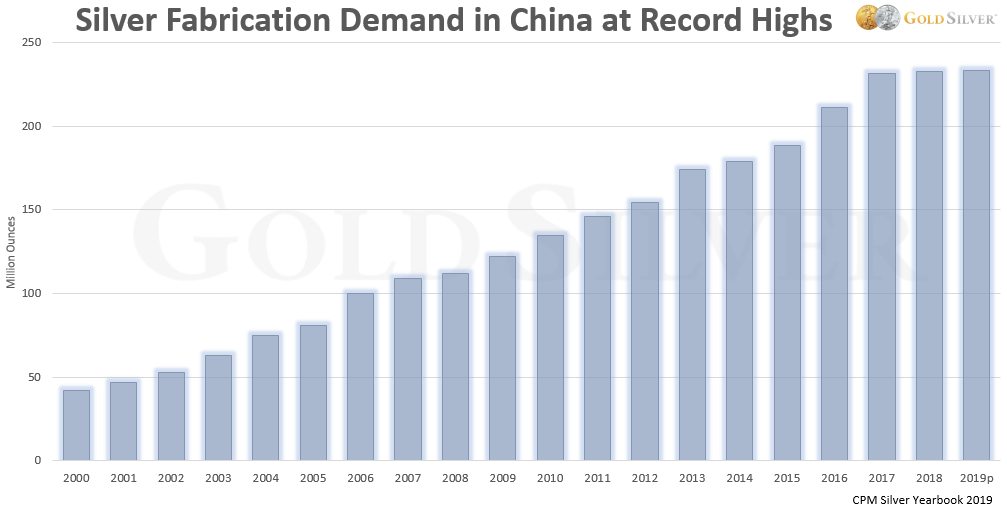 Fabrication demand in China has grown 425% in 18 years. And this with an inflation rate lower than the US.

And oh, by the way, jewelry and silverware demand both hit all-time highs in 2018.

Supply and demand in the silver market are going in different directions. I cannot find a period in modern history where supply and demand were so out of balance than now.

With the setup currently in place, the wick that leads to silver’s rise sits precariously by a roaring fire.

It's Economics 101: spiking demand, meet inadequate supply. Once the silver party gets going, it will be one for the record books.

If you think, like Mike Maloney, that a major spark for this market is headed our way, get your silver Eagle mint cases now while they’re still cheap.