But check out just how undervalued silver is in this new video with Mike Maloney and Ronnie Stoeferle.

This chart shows the silver/gold ratio (the gold/silver ratio inverted) vs. the S&P 500. Note the strong correlation for two decades—until it abruptly ended in 2011. 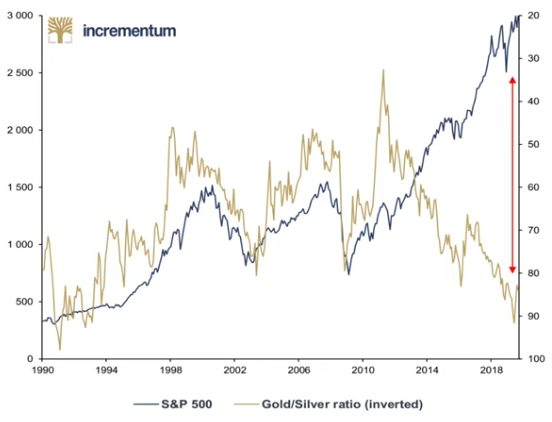 What happened? Ronnie explains that we had monetary inflation (QE) from 2008 to 2011, then asset price inflation beginning in 2011, a process that pushed up asset prices and thus pushed this ratio to an extreme.

He points out that based on Murray Rothbard’s research, inflation occurs in three stages—and we’ve now seen the first two stages. Next up is stage three: price inflation.

It’s a contrarian call, but a recent Bloomberg cover referred to the “death of inflation.” As Ronnie says, this is a reliable contrarian indicator and investors should thus prepare for price inflation.

Tune it to also hear Mike talk about the wealth disparity… it isn’t because Jeff Bezos created the world’s biggest shopping center and made billions of dollars, for example, but because currency creation has lifted asset prices and made him worth more at a much faster pace than the average investor.

It’s all very eye-opening, and has clear implications for investors that want to maximize their profit opportunity in silver.