The 1% Skew: US Median Household Income Is About Half the Average

One of the most misleading statistics is the mean, or simple average. When measuring things like income in the US, it’s nearly meaningless.

In simple terms, if Warren Buffet walks into a room in which there are 80 guys who are dead broke, the moment he’s there, they’re all billionaires, on average. Because Buffett is worth over $81 billion, and 81 guys divided by any number over 81 billion means that on average, they’re all worth over $1 billion.

The top 5% of US households earn as much as the bottom 60% combined. The top earners skew the mean, or simple average income number, much higher than the amount the median, or exact middle-of-the-pack household earns.

When looking at the median, we take every single US household and rank them by annual income. There are about 126 million households in the US, so when ranked by income, we look at the income of the 63rd millionth on the list.

And what we find is that for all the purported progress and recovery and great stock market and all the rest, the real household median income, below which half of all US households fall, is around $45,000 and about half the mean income of almost $90,000: 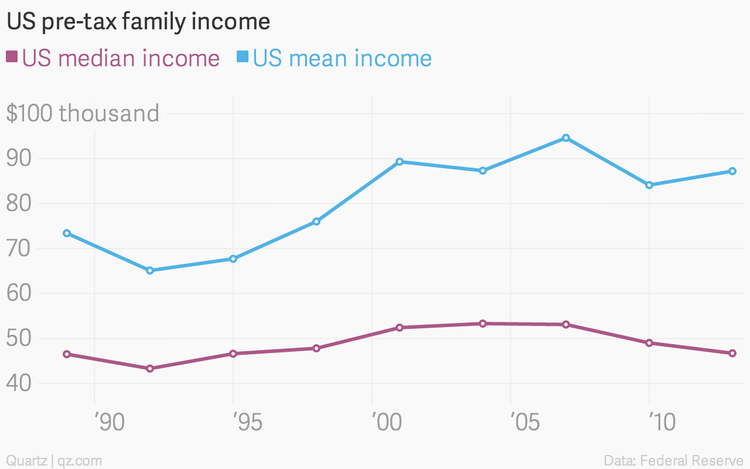 If we want to extend the opportunities for positive social roles to everyone, we have to change the way money is created and distributed in our economy.

One of the most unrecognized dynamics of our era is the structural dependence of our society on our economy. One set of pundits, politicos and academics wring their hands over the fragmenting of civil society (the rise of disintegrative, divisive forces and the decay of integrative forces) and decry the rising inequality that is our economy's dominant feature, while another set of pundits and academics celebrate the economy's remarkable adaptability or focus solely on reading financial tea leaves (interest rates, Fed policy tweaks, unemployment rates, etc.)

Those few analysts who escape their respective silos/academic ghettos rarely get past generalities such as the erosion of social mobility, a dynamic that is clearly economic and social.

The foundation of any economy is its money, and this is why I keep saying: if you don't change the way money is created and distributed, you change nothing. Yes, we can tweak various financial parameters and delude ourselves into believing that yet another raft of laws and regulations will actually reverse the erosion of civil society or reverse the rapidly widening gulf between the top 5% and the bottom 95%, but delusions aren't reality.

If we want to extend the opportunities for positive social roles to everyone, we have to change the way money is created and distributed in our economy. That will require a transformation not just in whiz-bang technology but in the foundations of our entire economy.

ORIGINAL SOURCE: Our Economy Is Failing Our Society by Charles Hugh Smith at Of Two Minds on 5/21/18