The 3 Flaws: Why the Hunt Bros Were Not the Primary Reason for Silver’s 1970s Spike

An investor told me he only buys gold. No silver. His reason?

“Silver spiked in 1980 only because the Hunt Brothers were trying to corner it.”

It’s true the Hunt Brothers bought a lot of silver back then. And it’s hard to imagine their involvement didn’t impact the price. If you recall, silver rose a whopping 3,105% from its 1970 low to 1980 high.

But were the Hunt Brothers the primary reason for such a dramatic spike in price? This is an important topic, because if silver’s biggest modern-day mania was the result of a one-off event, then maybe we shouldn’t expect it to rise like that again.

In my opinion, the investor is wrong. And there are three core reasons why.

Just How Much Silver Are We Talking About?

It’s true the Hunt Brothers were literally hoarding silver (along with their Saudi business partners), both physical metal and futures contracts. At their peak, they controlled about 250 million ounces of silver – 100 million in physical and 150 million in futures contracts. That’s a lot, and most reports conclude this is why silver skyrocketed in the 1970s.

How much of the silver market did they control? Several reports estimate the Hunt’s stash equaled 20% of silver supply. One account claimed it was one-third of global supply. Really?

That figure, however, excludes rare coins and all silver used in jewelry, silverware, decorative items, etc. – throw all that in and we’re probably looking at something like 12 billion ounces of total above ground stock. If that figure is correct, then the Hunts controlled about 2% of total world supply at the time.

In either case it’s still a lot, to be sure, but it hardly matches how most mainstream articles portray the extent of their holdings.

Why did the Hunt brothers want so much silver? They distrusted the US dollar, and were worried about inflation. As Mike Maloney puts it, “I believe the Hunt brothers were more concerned about long-term survival and preservation of their family's wealth, than with short-term speculative profits. In an interview with Barron's magazine, Bunker Hunt kept quiet about his silver investments, but made no secret of his distaste for the dollar: ‘Just about anything you buy, rather than paper, is better… if you don't like gold, use silver, or diamonds, or copper, but something. Any damn fool can run a printing press.’”

Also, you’ll recall that until 1975, it was illegal for US citizens to buy physical gold. So the Hunt Brothers focused on silver, because they believed it would serve as a safe haven just like gold, against inflation and a weak US dollar.

Anyway, on to the three reasons the investor is wrong. See if you agree…

#1 EVERYTHING Rose, Not Just Silver

If the silver price skyrocketed solely because of the Hunt Brothers, why did gold rise so much, too? You’ll see they clearly rose and fell together. 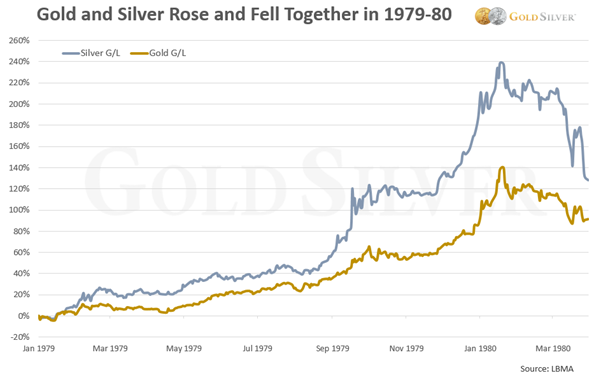 The rise in gold and silver were so closely related, in fact, that the correlation coefficient between the two metals during this time was a whopping 99.2%! In other words, they moved in the same direction every day – whether up or down – 99.2% of the time.

If the Hunt Brothers were the reason for silver’s climb, why did gold rise in virtual lockstep with it? The Hunts had no known involvement in the gold market.

Were the Hunt Brothers cornering all these markets, too? Or was it more likely due to things like this:

And oh, by the way, industrial demand for silver fell during this time, and global supply rose!

I asked Jeff Christian, managing partner of CPM Group and who was working in the metals industry at the time, for his take on this topic:

“The Hunts’ purchases of silver clearly helped push the silver price up in 1979 into early 1980. However, at that time oil prices quadrupled, gold went from $190 to $850, copper tripled, other commodities prices rose sharply, inflation hit 14%, interest rates were deregulated and allowed to float, US hostages were in Iran, the Soviet Union invaded Afghanistan, Iranian and Soviet assets were frozen in the United States, among other things. Many other factors were driving silver prices higher. If it had only been the Hunt’s silver purchases and antics (which have been grossly misrepresented by others in the silver market), only silver would have risen. The fact that silver was one small market in the midst of a broad upward movement across commodities, along with the dollar rising as investors turned to it as a safe haven, suggests that the Hunts were only participants in the upward move in silver, which they had anticipated and which they clearly helped.”

Did silver really rise because of two men controlling a single-digit percent of investable silver – or did it rise, like so many other commodities, from the extreme global economic uncertainty and stress of that time? It seems far-fetched to assign the bulk of rise to the Hunts. Clearly, there were a number of other major catalysts at the time that contributed to silver’s rise.

The mainstream media first started reporting on the Hunt Brothers “cornering” activity in early 1974. So why did the silver price do this? 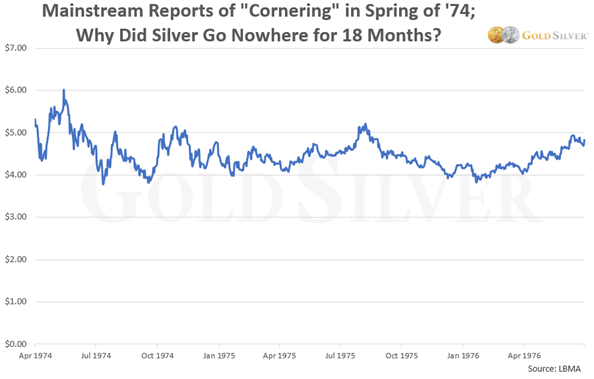 The silver price didn’t react at all. In fact, it fell as much as 20% over the next 18 months.

Maybe you think traders weren’t aware or didn’t care. Au contraire: not many people know this, but Bunker Hunt visited the Comex in April 1974, and when he walked onto the trading floor the normal frenzy of activity came to a screeching halt. Everyone wanted to see who this odd Texan was, because they’d already heard rumors the brothers were attempting to corner the market. This, of course, only served to spread the rumors further. Yet the silver price didn’t react at all, except to get weaker. And that weakness lasted for well over a year.

Add up all this activity and it seems clear the Hunt Brothers were not the primary cause of silver’s giant move. 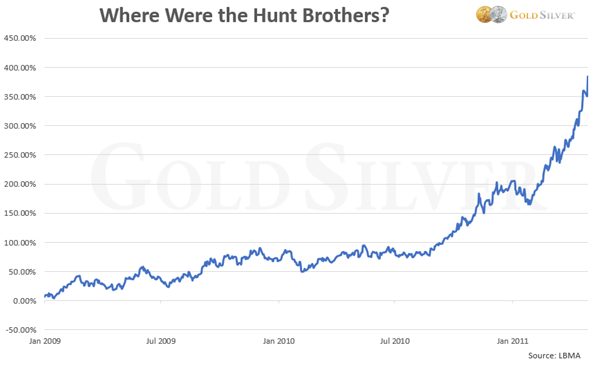 The silver price rose 390% in less than three years. The chart doesn’t show it, but silver rose 448% from its 2008 low to the 2011 high. The Hunt Brothers, rest their souls, had already passed away – so why did silver climb so dramatically again?

The answer, of course, is because silver responded to other factors. You’ll recall the big fear at this time was that the Fed and other central bankers had just instituted their quantitative easing (QE) programs, and many feared we’d see inflation. They bought silver (and gold) in response.

Silver’s massive move after the financial crisis was the result of inflation fears, and the high degree of uncertainty that resulted from the crisis. This is good to know, because another crisis and inflation are destined to happen again.

The bottom line is that silver has proven it can spike wildly without involvement from the Hunts or others like them.

What nobody – at least that I’ve read – seems to account for is the possibility, perhaps even the probability, that other “Hunts” will come along today and try to buy up large quantities of the metal.

The silver market is highly vulnerable to this possibility because it’s just so darned tiny compared to the size of other asset classes and the amount of currency sloshing around the world. In fact, I believe the silver market’s small size represents the #1 reason the price will skyrocket (check out the slides beginning just before the 10-minute mark).

When precious metals begin the next bull market in earnest, it won’t take much cash entering the silver market to ignite the price. It seems entirely likely that some big investors are going to figure that out.

To be clear, the Hunt Brothers involvement did have some impact on silver’s rise. But to suggest they were the main impetus behind the tremendous move doesn’t fit with the facts.

If you agree, then we should look at silver’s fundamentals to make any kind of price projection, rather than some one-off event. And that’s good news; since the fundamentals are very positive, it means we can again see a 1970s type gain in the price. As many of you know, Mike is even more bullish on silver than gold.

I don’t know about you, but I’m buying. A major crisis is on the way, which means a big move in silver is coming.

Fed’s Evans Says Should Not Try to Finetune Inflation Overshoot

Millions of Americans Expect to Lose Their Homes as Covid Rages

Don’t Blame The Pandemic For The $277 Trillion Debt Pile

14 Million People Will Lose Their Unemployment Benefits, 30 Million At Risk Of Evict...

Global Debt Has Piled Up at an Unprecedented Pace Since 2016

Italy's Bank Troubles Are Back to Haunt It