How Long Can Silver Stay Cheap? Miners Share a Clue

I saw an analyst report from a bank that estimated what the primary silver producers would generate in free cash flow this year.

However, it carries a direct hint about where the price of silver is headed.

While it doesn’t mean a surge in the silver price is imminent, the industry has been here before and demonstrated there’s only one way out of this dilemma.

I think most of this audience knows the silver market is small.

At a $20 silver price, estimated supply this year is worth roughly $20 billion.

As I write, the market cap of Starbucks is $112 billion. Good coffee, but is a company that makes lattes really worth 5½ times more than the entire 2022 supply of a critical strategic metal?

The primary silver equity market is also small. By “primary” we mean those producers whose primary metal is silver. Roughly 75% of silver comes from non-silver mines, so there’s only a handful of true primary silver producers.

And those handful of producers have a tiny market cap compared to other resource markets. 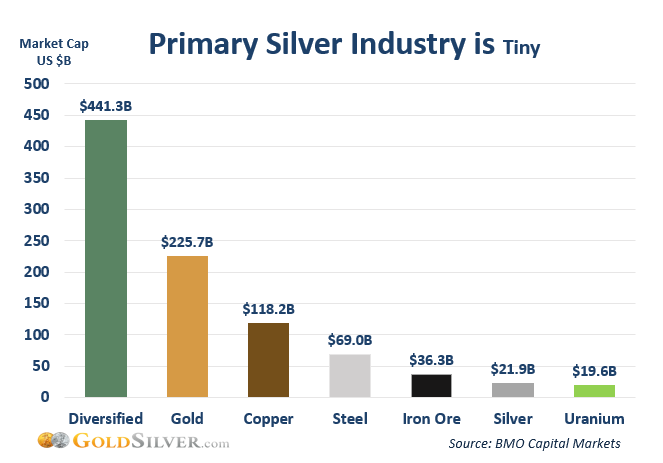 The market cap of the entire primary silver producers is just $21.9 billion.

The primary silver equities market is puny because investors have been discouraged by both silver prices and stock prices and sold, pushing the market cap lower. In turn this has hurt the companies, both production and growth.

This fact sets the stage for…

How Long Can You Be in the Red?

The analyst report I mentioned estimated what the primary silver producers would earn in free cash flow on a net basis for 2022. The report was done in early November, so it is up to date.

It’s very sobering for this niche industry. You experienced investors can probably guess what it shows. 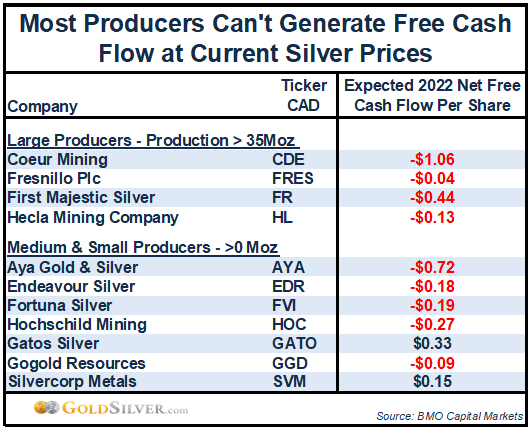 On a net basis, most primary silver producers are unable to generate positive free cash flow.

And the #1 reason they can’t do so is because of the depressed silver price.

This is a hint for the silver price, because obviously a sector can’t remain unprofitable indefinitely.

So, what’s the answer?

There’s Only One Way Out

It’s really true, because miners have already lowered costs about as much as they can. The persistent low silver price has forced them to do so.

Getting the industry average meaningfully lower is almost impossible, especially when we now have high inflation, which of course impacts the mining sector like everyone else. There are exceptions, but generally costs are rising. The silver price has to eventually rise to account for this.

The same research showed there is likely to be some improvement across the sector in 2023, but they estimate over half still won’t generate positive free cash flow. Even at slightly higher silver prices.

It’s true that three out of four ounces come from non-primary silver mines. They don’t require a high silver price; the silver is a byproduct and only offsets their total production costs. But it can naturally cause profitability problems. And they probably didn’t expect silver to average $19.55 an ounce during high inflation. So these producers too are hoping for (and in a few cases, need) a higher silver price.

If low silver prices were to persist, it could put some companies out of business, force some to cut back to only their highest-grade mines, push some to merge, or other things they may not necessarily want to do.

It can affect the industry in other ways, too: exploration and development budgets could fall, top management people including geologists could leave the industry, and students could be discouraged from choosing mining as a profession. It can turn into an ugly vicious cycle.

However, I don’t expect these extreme things to happen. All it takes is a higher silver price and the difficulties start to ease up for most of them.

Ultimately, the silver price MUST go higher. The industry can’t function this way indefinitely. Persistent high inflation demands it, too.

The miners are hinting that an upward shift in silver’s price is coming.

I recommend we invest accordingly.