The Coming Silver Supply Crunch Is Worse Than You Know

For data wonks like me, the annual Yearbooks from various gold and silver consultancies make for fun reading. You can always find little gems about what’s going on in the markets, and sometimes you can spot changes in trends early on. Seeing a compelling chart, especially one that’s not been widely reported, is almost as exciting as seeing my wife in a short skirt on date night.

Well, I’ve got a series of charts for you that point to a silver trend that is so entrenched in its development, so inevitable in its outcome, so inescapable in its consequences that it comes as close as one can get to a guarantee. And once fully underway, it will have major implications for the silver price, along with the availability of investment metal.

These charts all come courtesy of CPM Group’s 2018 Silver Yearbook. There are a number of precious metals consultancies in the industry, but I’ve found over the years that their Yearbooks have the most comprehensive and in-depth research (I know many readers disagree with their views on manipulation of the metals, but separate that out from the data they’ve uncovered and what it means).

Let’s jump in, starting with the demand side…

What most investors hear is that silver demand is down. And yes, coin and bar sales fell 52% last year, ending up at approximately the same level as 2007. But demand for ETPs (exchange-traded products, including ETFs) remained near all-time highs, as the data shows. 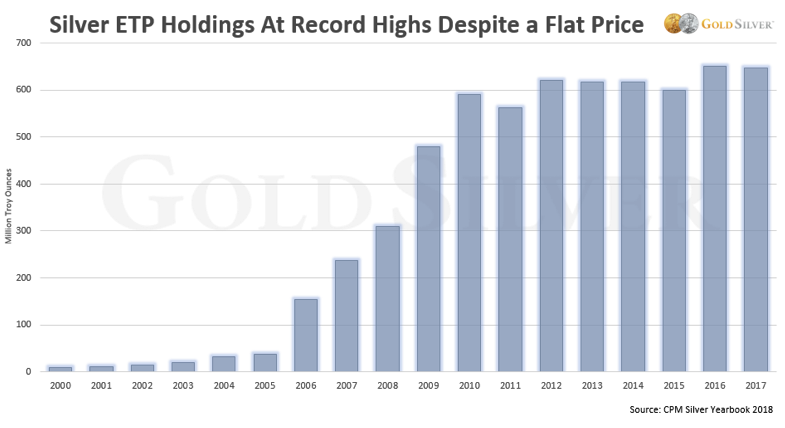 SLV and other silver paper vehicles saw virtually no drop in holdings last year, in spite of a weak silver price and falling physical demand. You and I don’t buy these products, but interest from mainstream investors has not let up at all.

And as CPM notes…

“There are various political and economic risks at present which could easily derail economic growth. This makes the lack of investment demand in silver now an even more grave concern, relative to the 1980s. Should investors increase their net buying once more, as CPM’s main long-term projections for silver suggest, prices would be expected to rise beyond 2018.”

We certainly agree that investment demand will increase in the coming monetary regime change, but that’s only one piece of the demand pie…

Fabricated product refers to anything a refiner forms from raw silver into a usable application or commercial product. So it includes almost all forms of silver, from medical applications and solar paste to jewelry, silverware, coins and bars.

And the demand for fabricated silver isn’t letting up. 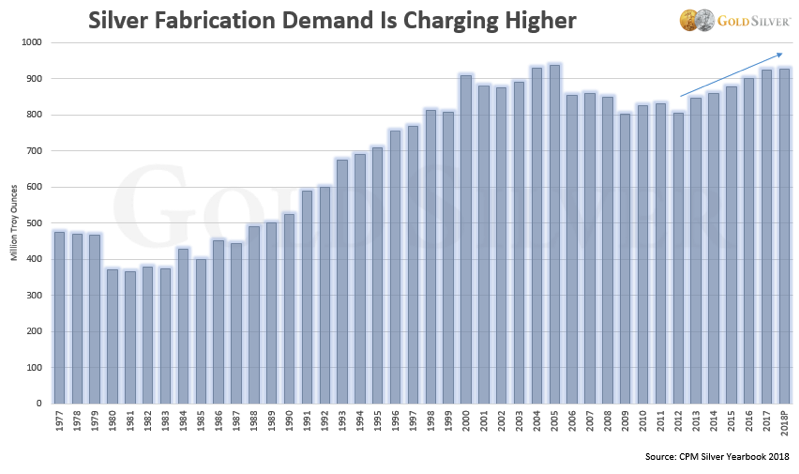 Total fabrication demand is up 15% just since 2012, back near all-time highs.

One of the biggest growth areas for silver demand has been photovoltaic use. Analysts predicted that solar power demand would fall last year. They were wrong. 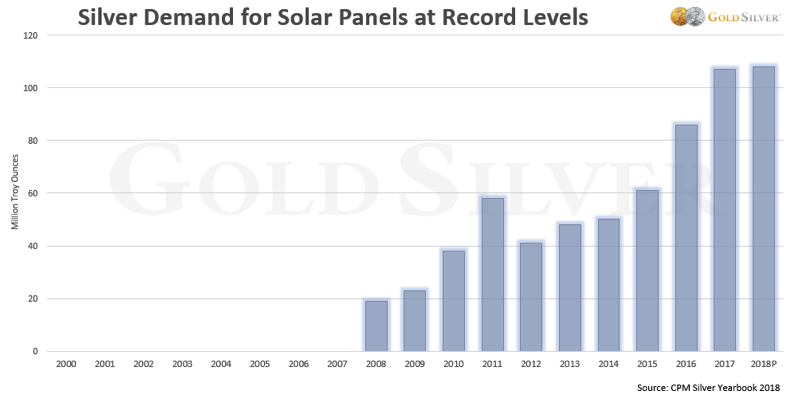 Demand for solar-panel-use silver rose a whopping 23.1% in 2017. A total of 106 million ounces went toward this use alone—more than a tenth of all silver supply!

“The use of silver in solar photovoltaic panels continued to grow rapidly, at rates that exceeded even the most optimistic projections… Given the strong emphasis being placed on solar power by China and other governments as a means to fight pollution and global warming, it seems more likely that 2018 will once more see strong growth in solar panel use of silver.”

You can’t talk about precious metals without looking at China. Most recent reports cite “softening” silver demand there, but again that’s not what the data says. Year after year the appetite for fabricated silver products in the world’s largest economy continues to grow stronger. 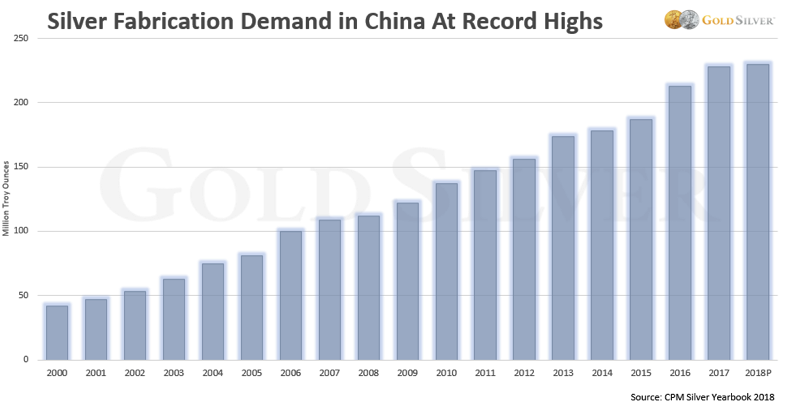 Since just 2015, fabrication demand in China is up 22%. You can see there’s been no “down” year in silver demand since the turn of the century. That won’t change anytime soon.

Now let’s look at the supply side of the equation…

Silver scrap is primarily comprised of recycled metal from jewelry and electronics. It is often overlooked by investors, but it amounts to roughly a fifth of all supply sources. And it’s not helping matters. 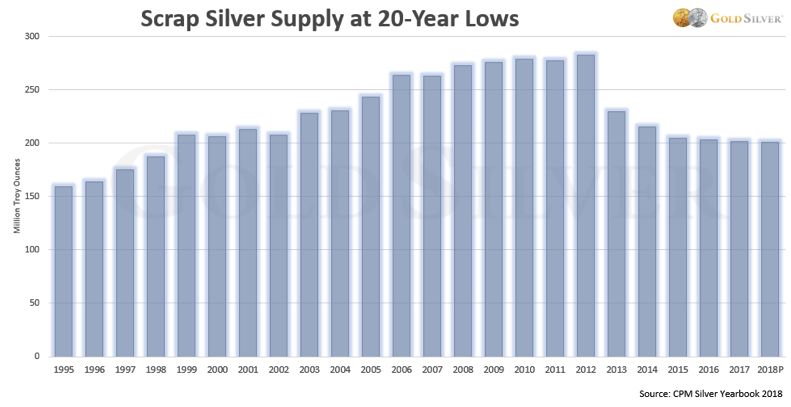 Recycled scrap metal supply has fallen a stunning 41% from its 2012 peak. Yes, it will rise again when the price does, but that rise will have to be both substantial and sustainable before it’ll help overall supply in any meaningful way.

Meanwhile, some reports claim that high silver prices will reduce overall industrial demand. As silver gets more expensive, industrial users will switch to other metals. But that depends on how easy it is to transition to cheaper sources, and the degree to which those sources function as conductors as well as silver does. There is no easy and obvious conversion option:

Perhaps the most compelling data of all when it comes to supply can be seen in this simple list of facts. As the Silver Yearbook outlines…

I could do a whole article on how silver mine supply is in decline and will continue to decline, but this quote summarizes the scenario nicely:

“The decline in mine supply since 2016… is expected to continue over the next decade… There is a broad set of problems that are negatively influencing global silver mine supply, which include an absence of a healthy pipeline of new projects, declining ore grades at both primary silver mines, and gold and base metals mines that produce silver as a byproduct, and depleting reserves.”

It is no longer a “prediction” that fewer ounces of silver will be dug up by the mining industry. It’s already happening. And it will continue for the next decade.

The Big Picture for Supply and Demand

Mine supply is in a decade-long decline. Fabrication demand is rising globally. These facts are irrefutable. If an analyst says differently, they probably hate precious metals. That’s okay, let them learn the hard way.

Supply and demand trends are clearly poised to continue tightening the silver market. And when the next crisis hits—regardless of whether Mike Maloney is 100% right about the details or not—and physical investors start buying in droves again, the silver price will be significantly impacted by this trend. It may not happen this year, but the 20,000-foot view of this market says a crunch is on the way. It’s supply/demand 101.

The Buy Window Is Open Only So Much Longer

The silver price could experience a knee-jerk decline if the stock market crashes similar to its fall in October 2008 (and if silver does decline, it’ll be temporary just like it was in 2008). Absent that, the breakout for silver is only a timing question, not an “if” one.

The conclusions of the 2018 Silver Yearbook agree:

“CPM Group believes that 2018 will provide a good buying opportunity for silver investors. Not only is the metal relatively undervalued, but there are several fundamental supply and demand trends, coupled with lurking political and macroeconomic problems, that should stimulate investor interest…”

This argues for making sure you have meaningful exposure to silver now, and maybe having a nice “cash stash” in case we do get better prices one last time.

However, keep in mind that a drop in the silver price may not actually end up handing you a bargain. Long-time investors will remember what happened to premiums when silver crashed in 2008/09: they soared. So while silver itself was priced significantly lower, investors were forced to pay near the same total cost for coins and bars after the 50% to 90% premiums were added in (yes, we know of a dealer that charged 90% premiums for a short time then).

You can avoid the high premium problem now: 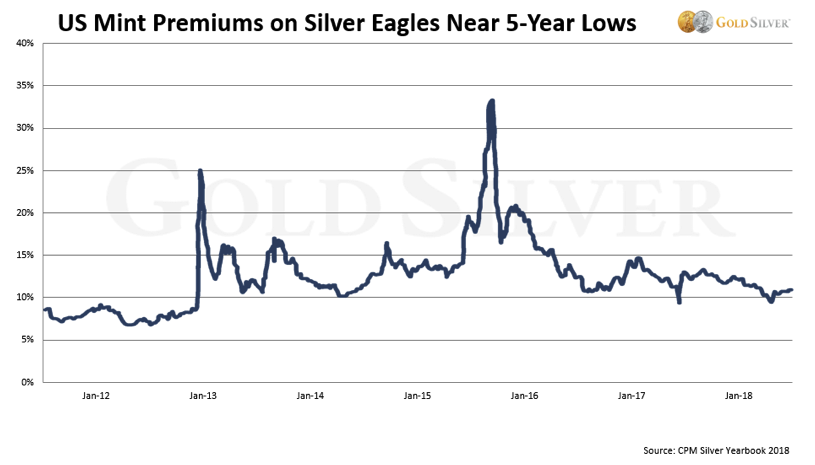 What the Mint charges dealers is currently below average. But that will change: you can see that less than two years ago premiums on Silver Eagles hit 33%—and that’s without a crisis!

Make no mistake: when the next crisis strikes, especially one of a monetary nature, it’ll be more than just the silver price that soars. Premiums will spike, too.

A lot more could be written on the supply/demand topic. But a crunch is clearly building, and while it will wreak havoc on the silver market, it will be very exciting for those of us that own lots of physical metal. Hang on.