The Devil Is in the Details: Overall CPI Inflation is Meaningless

It’s easy to get lazy when talking about inflation, to fall back on the simple truth that one generally doesn’t like to pay more for something if they could pay less. So hearing that inflation is on the rise is met with an instinctual negative reaction.

But what if the entirety of that rise is made up of skyrocketing college tuition and healthcare costs, and you don’t have kids in college or failing health?

While the media casually refers to omnibus inflation rate at any given time, that gross number can either be hugely impactful (two kids in college, chronic disease) or completely immaterial (no kids in college, good health) depending on your exposure to its constituent inputs. 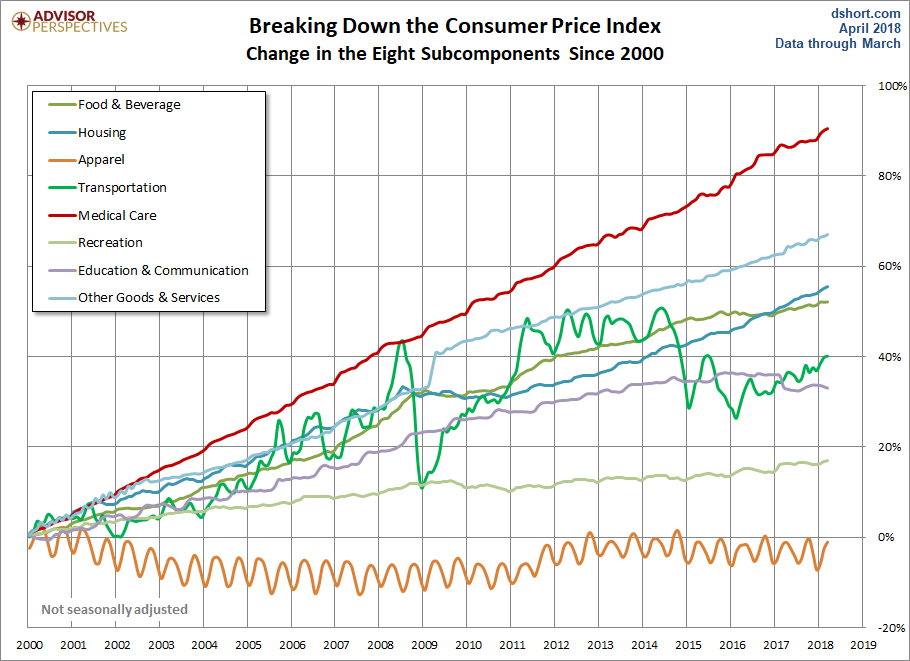 The universal response is to moan over price increases and take delight when prices are cheaper. But in reality, households vary dramatically in the impact that inflation has upon them.

When gasoline prices skyrocket, a two-earner suburban family with long car commutes suffers far more than the metro family with short subway commutes or retirees with no commute. And the pain is even more extreme for low-income households whose grocery money shrinks when gas prices rise. And remember, Uncle Sam excludes energy costs from Core Inflation.

Households with high medical costs are significantly more vulnerable than comparable households with low expenses in this category.

The BLS weights College Tuition and Fees at 1.613% of the total expenditures. But for households with college-bound children, the relentless growth of tuition and fees can cripple budgets. Often those costs get bundled into loans that saddle degree recipients with exorbitant debt burdens. Of course, the Federal Reserve would point out that the right dose of Core Inflation (extended of course to wages) would enable debt-burdened college grads to pay down their loans with inflated dollars.

Which brings us back to the Fed's efforts to manage the level of Core Inflation. At the macro level, the Fed can doubtless make a theoretical case for manipulating inflation. But have their efforts — ZIRP and Quantitative Easing — achieving the desired goal?

Inflation has been tame in recent years and slowly picked up, briefly reaching the Fed's target. But the one thing we can be certain about is this: Inflation volatility has a painful effect on lower income households, those on fixed incomes, those with higher ratios of tuition, transportation, or medical costs ... and all households whose discretionary spending is more dream than reality.

ORIGINAL SOURCE: What Inflation Means to You: Inside the Consumer Price Index by Jill Mislinski at Advisor Perspectives on 4/11/18