It’s not very often you get to use the word ‘guarantee’ and be right about it. But this just might be one of those times.

Question: what do you get when you combine a debt-based monetary system with soaring interest rates?

If debt levels are rising, and the federal government has to pay interest on that debt, and they’re hiking the rate that affects how much they pay on that debt…

Well, you end up with a toxic monetary cocktail that virtually guarantees more and more currency will have to be created to meet that obligation.

And you can probably guess how gold is likely to respond to greater and greater currency dilution.

Here’s some new research you may not have seen elsewhere…

You’ve seen debt charts before, but we need to set the stage. And, even I was surprised when I saw the latest total public debt figure from the Fed’s website. 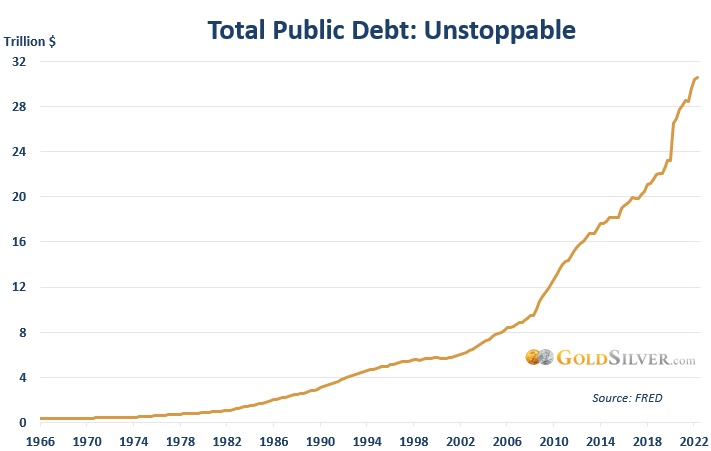 As you can see, the increase in federal public debt since 2000 has been unrelenting. It’s nothing short of a parabolic rise.

It doesn’t take much mathematical insight to understand that this isn’t sustainable.

And unless you think deficits will be zero going forward—deficits get automatically added to the debt—this figure is only going further north.

Now, some economists try to claim that “we owe it to ourselves,” implying large debts are not a big problem. Sometimes it even “feels” like they might be right.

But that statement is not entirely accurate; when you have to pay bond holders interest on that debt, that’s more than just paying ourselves. And with rates going up, that payment is getting bigger and bigger.

The federal government tracks the amount of interest they pay on their debt.

The latest update is sobering. 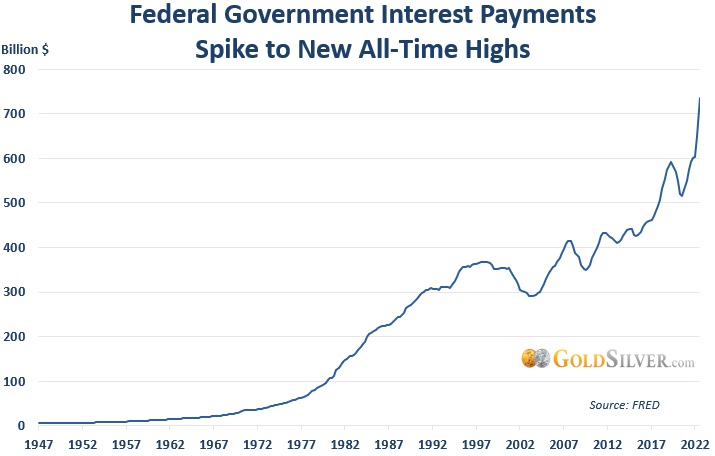 As you can see, the amount of interest paid on US debt has spiked to new all-time highs. That spike on the far right of the chart is a direct result of higher interest rates.

And this excludes the last Fed rate hike. And any hikes going forward.

This raises a natural question. Considering just interest payments on the debt…

To help answer that question, this study from the US House Committee on the Budget titled The Consequences of Higher Interest Rates to the Federal Budget came to the following shocking conclusion:

That $11 trillion figure is not a misprint.

How big is that?

Well, the Congressional Budget Office (CBO) projects that federal tax revenues will be approximately $6 trillion by 2045. Tax revenue is the government’s primary source of income.

I decided to put those two projections to a chart. While this scenario is 23 years away, it doesn’t paint a pretty picture. 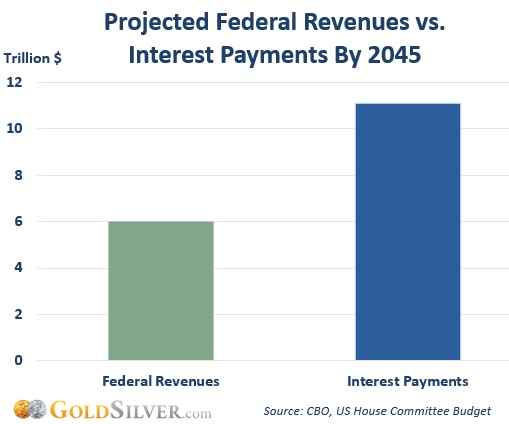 If this projection played out, the federal government would be paying 85% MORE in interest payments than their income.

Yes, it is a projection, and yes maybe interest rates don’t get back to the 50-year average. But the direction is frightening because it’s obviously not remotely feasible.

In fact, it’s not feasible now! We can’t balance the budget as it is. And of course this is only one of many payments the federal government has to make, the other big ones being healthcare, social security, education, welfare and defense.

How will the government meet its financial obligations?

The pressure on the financial system will increasingly grow. How will the federal government and politicians deal with this shortfall?

No American President would allow any of these options. And certainly, a total systemic collapse is not an option either.

The easiest and most expedient “solution” is to just print more currency.

Indeed, the track record of the US central bank certainly shows this is the choice they will make—they’ve done it numerous times in the past.

And what asset can’t be printed or digitized on a whim?

Gold supply grows roughly 1.5% per year. Imagine politicians being limited to spending increases of just 1.5% annually… that’s what a gold standard would do (which is why they’d fight it), and it’s why the gold price would respond to currency dilution. Gold can’t be diluted.

Yes, the gold price has been stagnant, but this cannot last. Especially once the Fed is forced to pause interest rate hikes and needs to start creating more and more currency again.

In my opinion these things are highly likely to start next year. Which will probably kickstart the next bull run—maybe the big one we’ve all been waiting for. Which is why I’m not worried about the gold price in the short term (one year).

It’s also why I’m not worried about gold in the long-term. Until the monetary system is restructured, we must own it. We can reconsider how much to own once we have a more sound, honest, responsible financial system.

More currency creation is guaranteed to come. That signals to investors to buy the one asset that can’t be diluted, debased, or destroyed.