Most analysts will tell you that the balance between supply and demand isn’t really a factor that drives the silver price. Historically that’s true—it’s usually investment demand, or lack thereof, that has the biggest impact on price.

There is a widening gap between silver supply and demand. And analysts and investors alike are taking notice.

It has nothing to do with supply at the Comex. It’s a bigger picture than what’s happening there. Let me explain…

It all started with a report from the Silver Institute showing that global demand for silver is projected to rise 16% this year, to 1.21 billion ounces.

Sounds like a potentially big catalyst, right? The thing is, they also projected supply would rise this year, including a 9-million-ounce increase from mine production.

So, what’s the problem?

The supply isn’t enough. The gap between supply and demand is so large that they say it will create the biggest deficit in decades.

In other words, even with greater supply, demand is rising much faster.

And the difference between the two is big. The Institute, through consultancy Metals Focus, projects the deficit will reach a whopping 194 million ounces this year. Here’s how that compares to the past 10 years. 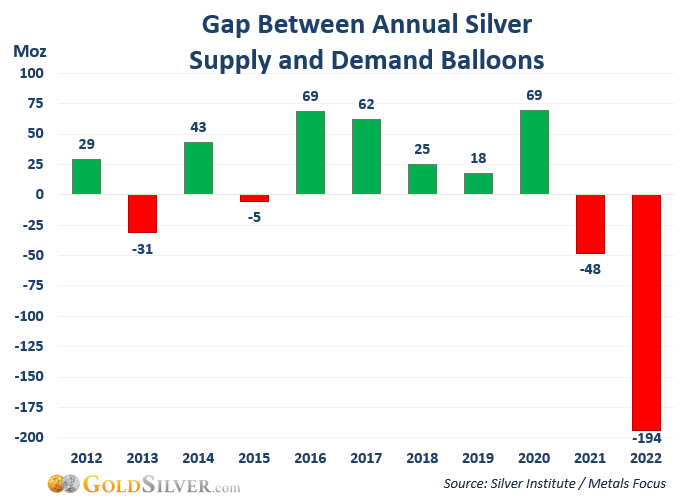 Demand is jumping so much that even with greater supply, the gap is widening to a historic degree.

As the chart shows…

The Institute says that 2022 will represent the biggest gap in decades. You have to go all the way back to the 1990s to find a difference between supply and demand this large.

This is a projection, so the final number for 2022 could be slightly different. But it won’t change the point: annual supply and demand for silver has now entered one of the biggest crunches seen in a long time.

One reason analysts say supply and demand don’t traditionally have a big impact on the silver price is because “there’s plenty of supply.” They based that mostly on the large silver stocks at the LBMA.

But LBMA supply is also suddenly dropping—look what’s happened in the past year.

In just 12 months, silver stocks at the London Bullion Market Association have fallen a stunning 27.2%. A decline of over 318 million ounces.

A similar trend is underway at the Comex—combined with the LBMA, the deficit between the two is a remarkable 370 million ounces. And that’s just through the end of October.

What’s going on with the silver supply all of a sudden?

The reason for the widening gap between supply and demand for silver is pretty simple:

What’s sobering about all this is that it’s not going to end in 2022.

Ultimately, the price cannot be disconnected from large imbalances between supply and demand for a prolonged period of time. And once we see the next spike in silver, we will certainly see a jump in demand from investors.

We may not normally invest in silver based on supply and demand issues, but if this trend continues it could indeed become yet another catalyst for the next spike. If that’s the case, it will be lots of fun for those of us that own a meaningful amount of physical metal.

Either way, I’m glad to be accumulating stacks of silver.