The headlines were big in Q1, and at the end of it all silver and gold were higher.

Our quarterly report looks at the performance of gold and silver vs. other major asset classes during the first quarter of 2022, along with a watchlist of catalysts that could push them higher this year.

Silver and Gold Lead Most Assets

A cocktail of nasty events transpired in Q1: Russia invaded Ukraine, inflation stubbornly continued to rise, the stock market became volatile and weak, and the Fed hiked interest rates. How did silver and gold respond to these events? 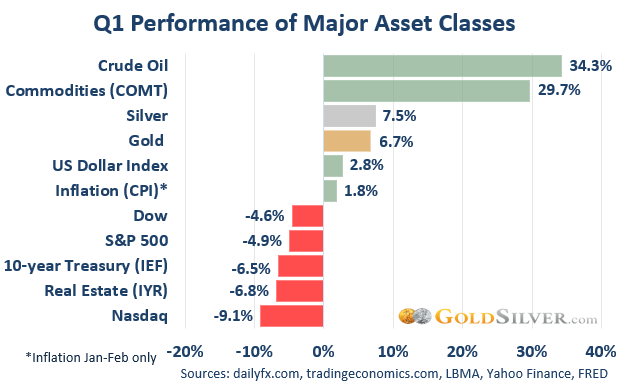 Silver rose 7.5%, while gold was 6.7% higher. It was gold’s biggest quarterly gain since mid-2020. Even bonds lost value. Investors clearly sought the ultimate safe haven assets as the various crises played out.

Crude oil made headlines, its price pushing higher by over a third in the first three months of the year. Commodities, already impacted by supply chain issues, also jumped.

Equity indexes all finished lower. And in a surprise to many mainstream investors, it was the worst quarter for U.S. bonds in over 40 years. And bitcoin (not shown) did not serve as a safe haven as some had claimed it would, losing 1.7%.

A number of ongoing issues provide context for the quarters ahead.

Geopolitical Conflicts. Gold spiked at the start of Russia’s invasion of Ukraine, and has since given some of the “war premium” back. While we all hope for resolution of the armed conflict, gold served its purpose.

I should also point out that the persistent rise in the CPI highlights the Fed’s misstatement from a year ago.. 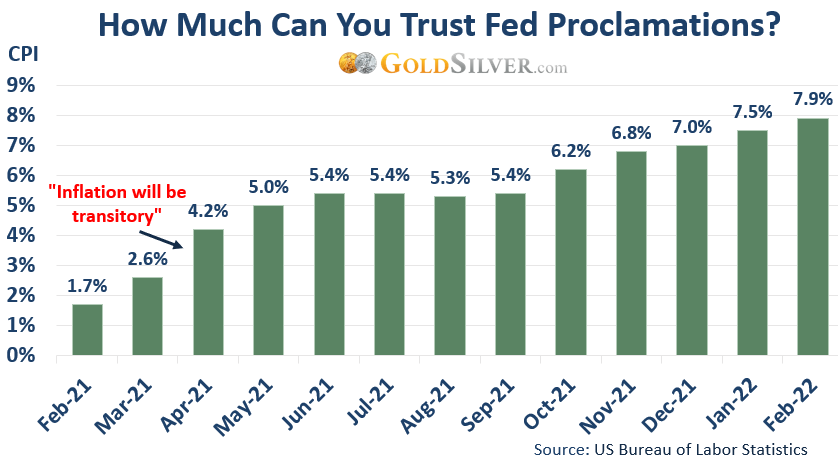 Interest Rate Hikes. The Fed added a quarter point to the funds rate on March 16. The debate now is how many more rate hikes the Fed will do.

While banks and analysts have various predictions, the Fed’s predicament is real. On the one hand tightening could cool inflation, but on the other hand it could hamper growth and increase the odds of stagflation or recession.

Many view the Fed as “behind the curve,” so the likelihood of further rate hikes seems inevitable. How does gold perform during rate hike cycles? 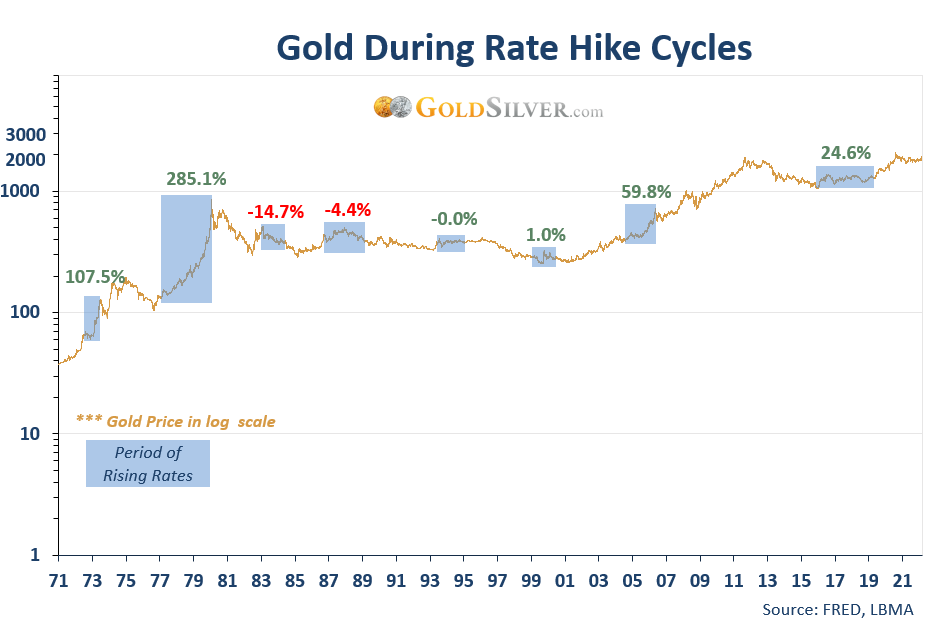 To the surprise of many in the mainstream, gold has a tendency to rise during rate hike cycles. While it may seem counterintuitive, it’s a result of the circumstances that compel the Fed to raise rates in the first place.

I have to ask, though, how much can the Fed realistically raise rates? Debt service costs will naturally increase, which has some analysts saying the Fed will purposely remain behind the curve.

U.S. Dollar. Global events have made the dollar more vulnerable. Even Goldman Sachs has highlighted the risks to its clients, starting with the potential fallout from the sanctions on Russia. This could push some countries around the world to move away from the dollar, eroding its global dominance. They point out the dollar has similar challenges the British pound faced in the early 1900s. That Goldman released a research note on “de-dollarization” is a major sign that investors are taking those risks seriously. It also means that cross border investing will slow, maybe dramatically.

U.S. Midterm Elections. While not until early November, it goes without saying that the US is experiencing elevated levels of partisan polarization, gridlock, and radicalization. Democrats have a minor advantage in the House and a thin majority in the Senate; since some voters are frustrated with President Biden’s handling of inflation and other issues, Republicans would be in a position to block any legislative move by winning one chamber. This will likely push Democrats to make big changes before the election, including social spending and perhaps higher taxes, the latter of which could hurt equities.

Add it all up and the need for a true safe haven asset is clear. With unresolved trends encompassing much of the globe, I expect to see the gold price reach new record highs this year.

More Lies in the CPI
After the Boom Must Come the Bust
Price Inflation Slows, But the Economy Keeps Getting Worse
What Do Initial and Continued Claims Suggest About Timing of a Recession?
Kansas City Fed Services Survey Tanks To -11 In January As Fed Withdraws Monetary Pu...
China and the US at Sovereign Debt War
World War III: Has It Begun?: Rickards
"The Bot Is Out There. It Doesn’t Feel Pity, Or Remorse, Or Fear, And It Absolutely...
Labor Shortage Talk Turns to Job Cuts
IRS Alerts Taxpayers They Must Answer a New Question On Tax Forms Or Face Consequenc...
Americans Fall Behind on Car Payments at Higher Rate Than in 2009: Bloomberg
Pending Home Sales Suffered Worst Annual Decline Ever In 2022, Despite December Surg...
UMich Inflation Expectations Plunge, Democrat Sentiment Sinks
The Core! Core PCE Deflator Declines To 4.4% YoY As M2 Money Stops Spinning At -1.3%...
David Morgan: Algorithmic Traders Could Flood Into the Gold-Silver Sector
More News